George Washington was born on February 22, 1732, at his parents’ estate on the south bank of the Potomac River in northeast Virginia. Congress made the day a Federal holiday in 1879 and nearly one hundred years later in the Uniform Monday Holiday Act of 1971, Congress changed the name of the holiday to Presidents Day and decreed that it be observed on the third Monday in February. This causes it to fall somewhere between February 15 and February 21.

It’s fair to say that the holiday was a bigger deal in years past than it is today, so here is a review of stories from the Lowell Sun from some previous Washington’s Birthday observances in the city: 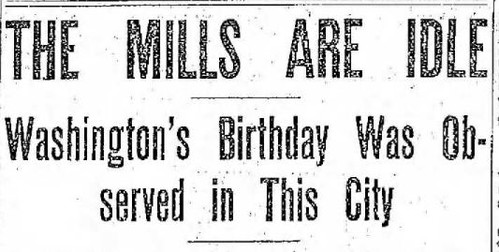 Thursday, February 22, 1912 – The Mills Are Idle: Washington’s Birthday Was Observed in This City (page one)

Tonight there will be a banquet at the Washington Club; the Elks will hold ladies’ night; many theatre parties have been arranged; the Concord Bowling club will banquet at Odd Fellows hall; and last but not least, Young Boyle and Young Slone will meet in the fistic arena at the Lowell Athletic Club. All of the mills are idle today, the banks, schools and public buildings are closed, and a majority of the business houses shut up show last night until tomorrow morning. 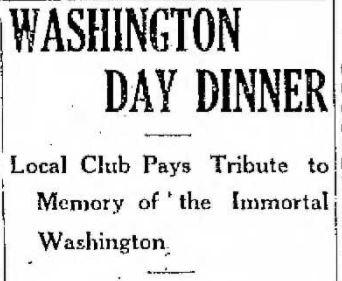 The 190th anniversary of Washington’s birthday was fittingly observed by the Washington club last evening with a dinner that must have made Epicurus himself wild with envy and a post-prandial program by far the best in the history of the club. . . At 7 o’clock the staff placed before members and guests a bounteous six course dinner: oyster cocktail, with olives, celery and radishes; clear green turtle soup; filet of sole, with tartar sauce and Saratoga chips; roast sirloin of beef, a la Washington; Virginia ham glace a la Hazard, with potato croquettes and French peas in cases; Sultana roll, Montrose sauce, with mixed cakes, lady fingers and macaroons; cigars, cigarets and demi-tasse.

The annual George Washington supper and party at the Pawtucket Congregational church last night drew an audience of 800 parsons. A group of sketches and one-act plays was given in the course of the entertainment program.

Giving up their holiday rest in order that the nation’s defense effort might not sag, hundreds of local mill workers were left stranded in all sections of the city this morning when a sharply curtailed bus service failed to provide the necessary transportation facilities. Between the hours of 6 and 7 o’clock this morning, scores of workers milled about Kearney square waiting in vain for a bus to take them to their destinations, while in outlying sections, groups huddled about the bus-stops wondering what had happened to the bus service.

(No mention of any events in Lowell).

Governor Dever was expected to shake the hands of 9,000 persons at the traditional Washington’s birthday reception in the Hall of Flags at the state house today. Official state observance of the holiday begins at 10 a.m. when officers and delegates of the Sons of the American Revolution lead the line into the state house for the 68th annual governor’s reception. Gov. Dever, in top condition after a five-week vacation, expected to shake hands for at least three hours.

February 22, 1962 – no news stories; just a theme on advertisements for local retailers. 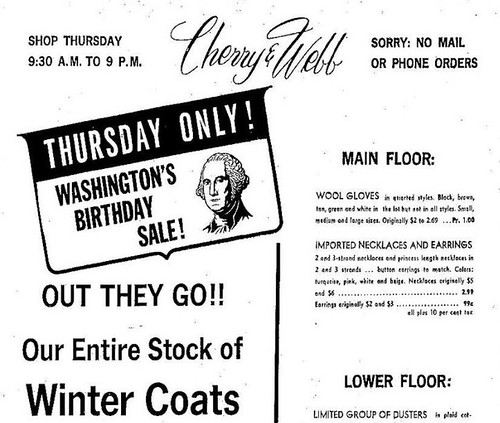 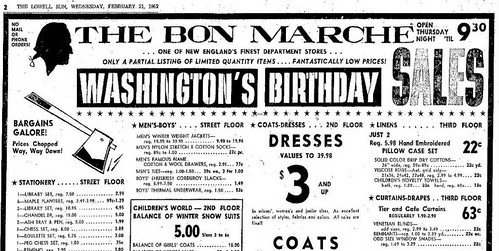