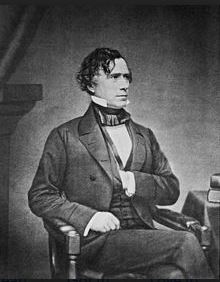 The Train Wreck That Derailed a President

“The burden of guilt I carry for a public career that destroyed my family will haunt me as long as I live.”    – Franklin Pierce –

Our 14th President Franklin Pierce, (1853 to 1857), had close ties to the Merrimack Valley.  Born in Hillsborough, New Hampshire, the charismatic, successful New Hampshire legislator died in Concord October 8, 1869.  He frequently visited Andover where his wife’s sister resided. She was married to John Aiken, agent for a Lawrence textile manufacturing company and executive at a Lowell mill. Aiken was also a benefactor of Phillips Academy, where the Pierce’s son was scheduled to attend. The Aiken home at 48 Central Street, was known as the Summer White House for even after Jane Pierce’s death there in 1863, he continued to visit.

Harriet Beecher Stowe made certain never to be home to welcome Pierce however. The anti-slavery author considered her husband, Calvin’s friend and Bowdoin College classmate, a traitor to her country.

Franklin’s wife, Jane Means Pierce. was the daughter of a Congregational minister and Bowdoin College president.  They were mismatched since he was fond of social gatherings and alcohol, while she was introverted, deeply religious and a teetotaler prone to depression.

Pierce was elected to the New Hampshire Legislature at the age of 24, and not long after, became the youngest member of the United States Senate. The Pierce’s first son died a few days after birth and after the loss of their second boy to typhus at age four, Franklin agreed to quit politics according to his Jane’s wishes. He resigned from Congress in 1842, returning home to Concord practice law.  In 1845, he was appointed New Hampshire’s U.S. Attorney.  He then enlisted in the Army to fight in the Mexican-American War, was wounded, and rose to the rank of brigadier general.

Although Pierce had sworn off national politics for Jane, who always believed politics brought out the worst in men, the charismatic veteran was considered the only possible candidate to win support from both North and South. The 1852 Democratic National Convention was in dead heat when Franklin Pierce was nominated on the 49th ballot as its dark horse candidate. Nicknamed ‘Young Hickory’ in homage to ‘Old Hickory’ Andrew Jackson, the campaign slogan was “We Polked you in 1844; We shall Pierce you in 1852.” Pierce never lost an election and he defeated his former Mexican War commanding officer, Winfield Scott, in the race.  Upon hearing of her husband’s election, Jane promptly fainted. 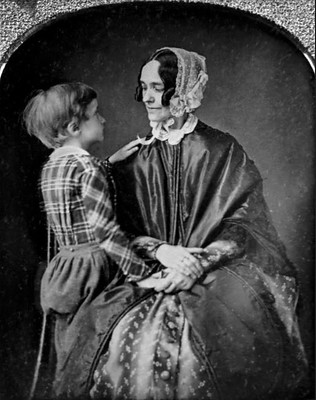 On January 6, 1853, following Christmas holidays spent in Andover, the President Elect boarded the 1:15 Northbound train bound for Concord, New Hampshire with Jane and their 11-year-old son, Benjamin.  They were headed home to pack for the move into the White House. Less than three miles from Andover Station, “there came a violent jolt, followed by sudden wrenching and frightful jerking…”

Frigid weather may have been a factor as the car hit rocks upon the tracks, breaking an axle.  Several cars were derailed, toppling off the embankment and plunging into a rocky field 15-foot below.

Benny, who had been standing up to look out the window, was horribly maimed in front of his parent’s eyes, the only causality among some sixty passengers.  The boy’s mangled body was taken by cart to the Aikens’ home where his funeral was later held.  Twelve of Benny’s schoolmates served as pallbearers, later joining the President-Elect in transporting their friend’s body to Concord for burial.  Benny’s mother was too distraught to accompany them.

Survivors who suffered injuries, later sued the Boston and Maine Railroad but Jane Pierce refused.  She remained convinced their son’s life had been sacrificed so Franklin would be free to focus on national duties.  She believed their son was the price paid for Franklin’s political ambitions. Nor did she ever forgive her husband for betraying the promise he’d made to her years before to keep out of politics.

It was estimated that the “influx of out-of-town strangers” attending Pierce’s inauguration, numbered over 20,000. “A crowd larger than any ever before witnessing such an event,” when this “most dashing” of Presidents rode up Pennsylvania Avenue with his predecessor, Millard Fillmore, in a “magnificent carriage” drawn by “handsome horses.”

In his Inaugural Address on March 4, Pierce alluded to the train tragedy that impacted his single term as Chief Executive.

“I gave in to the draft for the same reason I fought in the Mexican War.  I believed that having a father who served his country in time of need would give my son, Benjamin, great advantages throughout his life.” Pierce would be the only President to serve a full term without a Vice President for the designated William King, became gravely ill following a Cuban trip.  Unable to attend the inauguration, he died a few weeks later.

Nor did the First Lady attend.  She remained in Baltimore with relatives and because the First Family was in mourning, the traditional inaugural ball was cancelled.

Jane Pierce became known as ‘The Shadow in the White House.’ The ‘Phantom First Lady’ wore black, refused to attend public events or greet dignitaries and summoned spiritualists to the White House. This “Picture of Melancholy” wrote notes to Benny and chatted with him as if he were still alive. Franklin Pierce did put up the first Christmas tree in the White House, not only as a symbol of national unity but to cheer up his wife. The First Lady did attend the White House’s 1855 New Year’s Reception.  Hers is the only black dress among the Smithsonian Institution’s First Ladies’ Gown Collection.

Pierce’s presidency was marked by political strife as he attempted to appease North and South. He believed national union more important than sectional differences and did his best to appease both sides, even appointing Jefferson Davis to his Cabinet  His popularity declined in the north after he supported the Kansas-Nebraska Act that replaced the 1820 Missouri Compromise and led to violent conflict over the expansion of slavery in the American West and as new states entered the Union.

Franklin Pierce was a one term President, failing to even receive his party’s nomination to run again.  After the Andover train wreck, according to one biographer, “within days, Pierce lost his only surviving son, his wife’s support, his self-confidence, ability to lead and his will to succeed.” He is remembered in history as one of America’s most ‘ineffectual’ Presidents.

4 Responses to The Train Wreck That Derailed a President