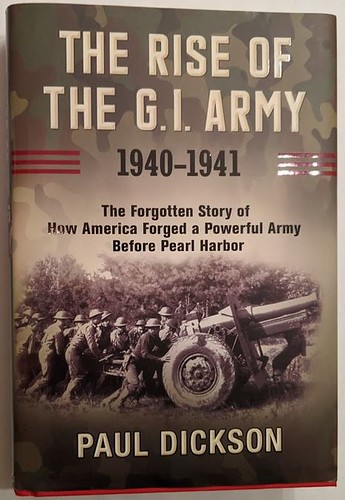 Paul Dickson’s 2020 book, The Rise of the G.I. Army, 1940-1941, has the subtitle “The forgotten story of how America forged a powerful Army before Pearl Harbor.” Forgotten indeed! I found the story in this book startling, although I should not have.

Like many others, I just assumed that on the day after the attack on Pearl Harbor, every able-bodied young adult male in America rushed to the local recruiting office and signed up. But my own research on the many monuments in Lowell dedicated to those who died in World War II disclosed that quite a few of those men were in the Army long before Pearl Harbor. Perhaps military service was the only Depression-era employment available, I thought.

What I did not realize was that in September 1940, the United State drafted more than 1 million men into the Army. Prior to that, the U.S. Army consisted of fewer than 200,000 soldiers, ranking it 17th in the world, just behind the army of Portugal. A combination of private citizens and government officials, especially President Franklin Roosevelt and Chief of Staff General George C. Marshall, persuaded Congress to implement a draft. Everyone registered, there was a fishbowl filled with capsules filled with numbers, and if your number was drawn, within a week you were off to basic training.

Even though Europe had already been in a shooting war for a year and France had surrendered earlier that summer, implementing the draft was far from universally popular. As Dickson recounts, the forces of isolationism in the United States were extremely powerful. But enough members of Congress concluded that the draft, which would keep those affected in the Army for just one year, was a prudent measure with minimal imposition on the lives of the individual draftees.

That same calculus was greatly strained a year later, in September 1941, when the million-man Army of draftees made ready to change into civilian clothes and go home. With the U.S. entry into the war seeming imminent, disbanding this newly created and trained Army seemed to many to be the height of recklessness. Nevertheless, the vote in Congress to extend the draft passed by only a single vote and only then with the assistance of some slick political maneuvering by Speaker of the House Sam Rayburn and his chief lieutenant, Lyndon Johnson.

Another revelation (to me) was the importance of the Civilian Conservation Corps in the creation of the wartime army. Part of the New Deal’s response to the Great Depression, the CCC gave unemployed young men government jobs related to conservation and the development of natural resources. From its founding in 1933 to its termination in 1942, more than 3 million men served in the CCC, most living in barracks-like camps in or near the wilderness. While the CCC had no military training, this experience did give countless men the experience of living and working together, just as they would do when in the Army.

The CCC also provided invaluable experience to the U.S. Army’s officer corps which was in charge of the program. For the many active duty officers like Marshall and Omar Bradley who embraced their role in the CCC, the experience of working with civilians gave them invaluable exposure to the mindset of civilians, something that would become a major element of managing and leading an Army full of draftees.

Both the CCC and the draft Army of 1940 found a frightening large percentage of the American men they encountered to be malnourished, illiterate, and in poor health, all consequences of the Depression. With the robust medical and dental care provided in the CCC and the service along with ample food and plentiful educational opportunities, bot the CCC and the Army did much to improve the overall fitness of the population of American males.

Once the one million draftees were in uniform, the Army commenced a series of massive “maneuvers” that took place first in Tennessee, then Louisiana, and finally in Carolina. (The Carolina maneuvers ended on Saturday, December 6, 1941, the day before the Pearl Harbor attack.

While these maneuvers which used trucks with stove pipe “guns” and plaques that said “tank” to stand in for non-existent armored vehicles demonstrated how far behind the U.S. was in contrast to the armies already fighting in Europe and Africa, they also provided invaluable experience. There is a saying in the military that a good general understands tactics but a great general understands logistics. The 1940 and 1941 U.S. maneuvers used motorized units to cover huge swaths of territory. The demand for food and fuel was immense and constant. Army leaders quickly learned how to fulfill those needs. Four years later when the U.S. Army raced across Europe after the invasion of Normandy, the logistical skills learned on the backroads of Tennessee and Louisiana, were critical to the Army’s success.

Because of George Marshall’s single-minded commitment to building the strongest Army possible, he also was relentless in removing those officers who were unable or unwilling to lead in the modern military. Young, dynamic officers such as Dwight Eisenhower, George Patton, and Omar Bradley, leapfrogged more than a hundred of their more-senior-in-rank colleagues to fill top leadership positions on the eve of the war.

Also retired after the stateside maneuvers was the horse cavalry which was still an integral part of the pre-war Army, especially in the minds of some of the senior officers that Marshall pushed aside. The maneuvers demonstrated that while horse-borne cavalry could still accomplish some missions, it was no substitute for fast-moving motorized or mechanized units.

A couple of machines that helped elevate the motorization of the U.S. Army made their debut during the maneuvers: the jeep and the Piper Cub aircraft. A couple of characteristics of the draftees of 1940 helped speed the Army’s mechanization. Put an engine in front of an American male in 1940 and within minutes the young man was taking the thing apart to discover how it all worked. That kind of mechanical curiosity carried over the engines and mechanical systems of military equipment. And the common practice of filling stations distributing millions of free road maps had developed a collective skill in land navigation before many first wore an Army uniform.

Finally, Marshall intuitively understood that in a democracy like the United States, the Army would only succeed with the full support of the wider population, so he gave the media full access during the maneuvers, enlisted major entertainers such as Bob Hope to appear in USO shows, and encouraged Hollywood to feature the draft Army in movies such as Buck Privates which starred Abbott and Costello and the Andrews Sisters.

If you have any interest in the history of the U.S. in World War II, or even just a curiosity about how a functioning Democracy operates, please consider reading The Rise of the G.I. Army.