Former Alaskan poet Laureate Tom Sexton’s latest volume of poetry is “Cummiskey Alley.” The collection is named after Lowell’s first Irishman, Hugh Cummiskey, who walked from Boston to Lowell with a group of Irish laborers. Cummiskey and many other Irish labors dug miles of canals in Lowell, and helped birth the nation’s first industrial revolution. The following poems explore the American experiences of immigrants, largely Irish, and their descendants. The book is available from loompress.com or amazon.com 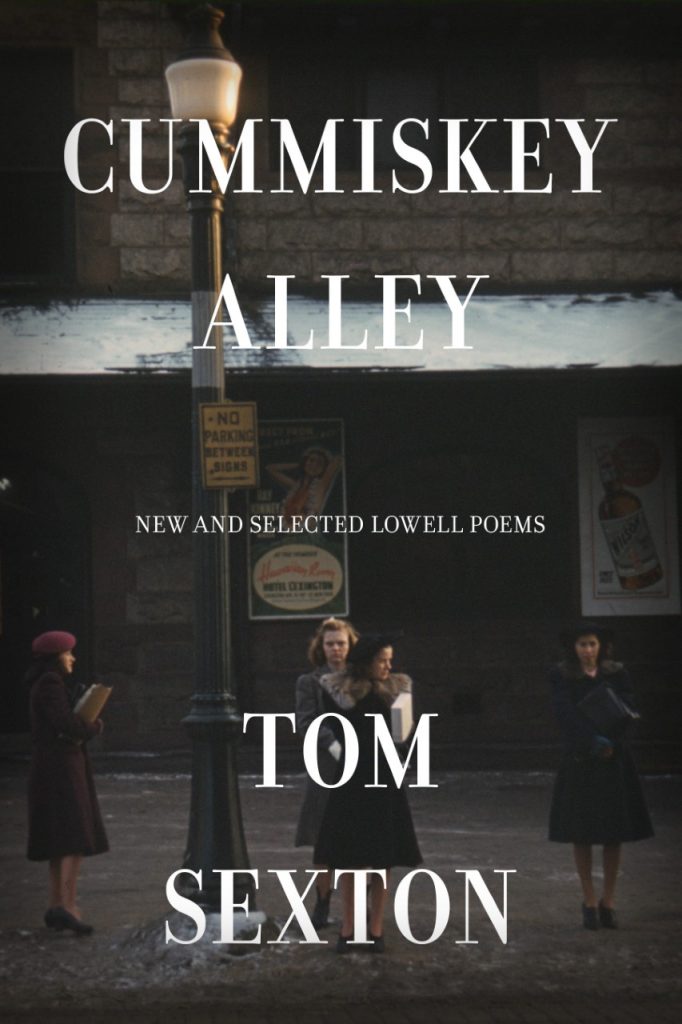 When your ship sails into Boston Harbor

stay with those who are walking to Lowell

By road or along the bank of the canal

that goes from Charlestown to the Paddy Camps.

I helped dig it when I came over. They need servants.

Don’t speak Irish. Drown it like an unwanted kitten.

Answer when they call you Bridget. They can’t

imagine we have our own names or our own spit.

No Lord owns the sky or the clouds overhead.

Don’t let them laugh at you like the poor Bridget

who begged the druggist for the glory of rhyme

when sent by her mistress for chloride and lime.

Sister bend like a rowan on a windswept ridge.

Be as bright as the halo around the Virgin’s head. 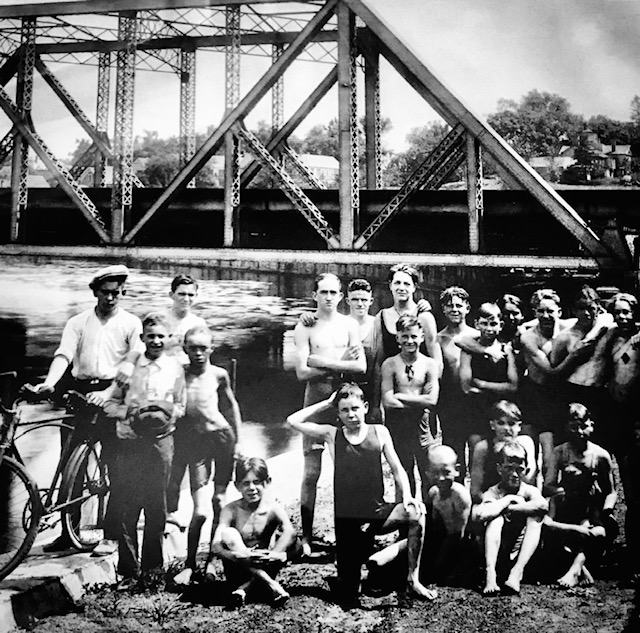 Swimmers at the Pawtucket Canal circa 1925

For Sean Sexton of Coolmeen

While visiting Limerick, I read in the paper

how you discovered nine of your cows

dead in the high pasture when you went

to gather them for the evening’s milking,

how you led the singed and blind survivor

down to the barn where it bawled all night.

Why lightning from a quickly clearing sky?

If I had driven out to Coolmeen, we could

have watched the western sky for comets,

the tears of saints. And naked, painted

the hills reciting the misfortunes of our name –

the cattle stolen and the ancient tower sacked

until the heaving sea itself was wet with tears 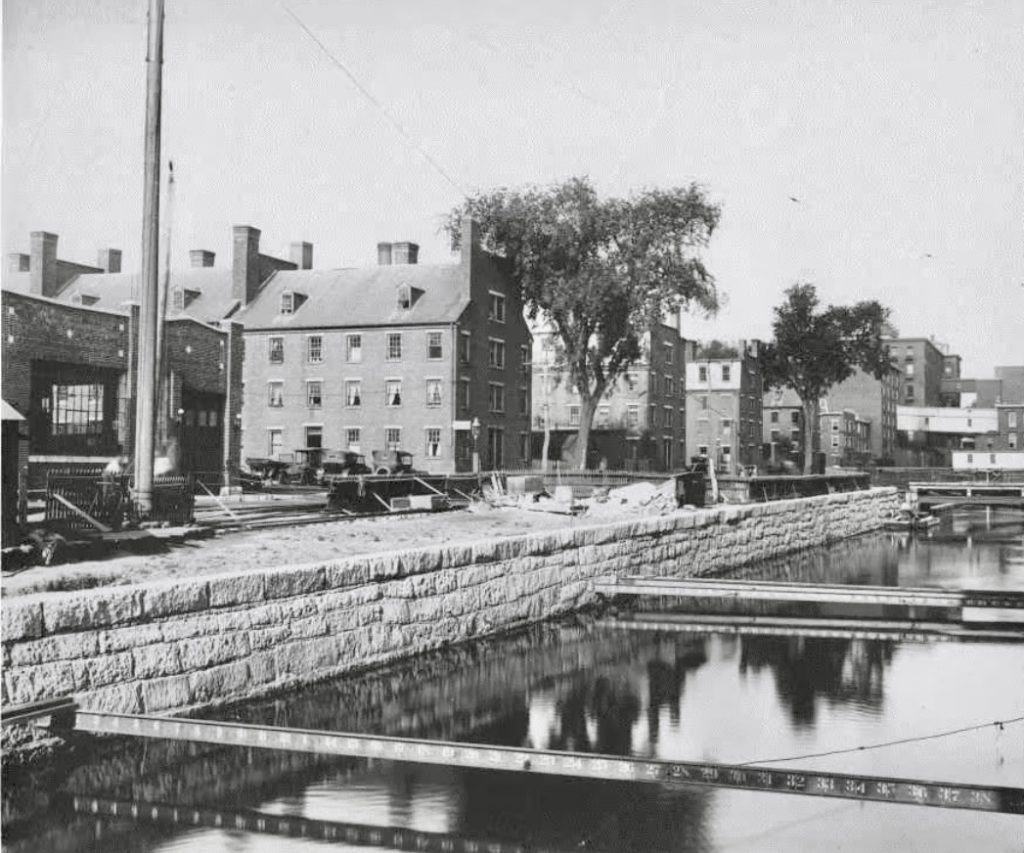 Eastern Canal across from the Boott Cotton Mills 1835-1839 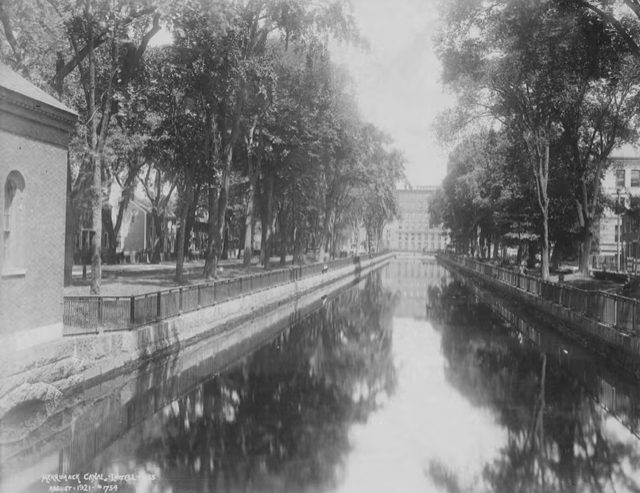 The sky was clear and pine needles

covered the path to where Thoreau

built his cabin on the morning I saw

and found myself thinking of that Irish

his shanty by the railroad tracks

to Thoreau for twenty-four dollars.

just as dawn was breaking with everything

he owned tied in a bundle on his back.

Walking behind were his wife and children

and the scrawny chickens who had spied

a man circling the shanty lime a fox.

May he always have a roof for the rain.

May the sun shine bright on his windowpane.

These men dropped the Francis Gate at Guard Locks in 1936, saving the downtown from flooding

not since I moved far away from Lowell.

He has my uncle Leo’s fighter’s face

Staggered by a right he picks up the pace.

Tom Sexton was born in Lowell, Massachusetts, and lived in the city through his high school years. He earned degrees at Northern Essex Community College and now-Salem State University, and then pursued graduate studies at the University of Alaska, where he stayed and founded the creative writing program at the Anchorage campus. He taught there for decades and co-founded the highly respected Alaska Quarterly Review. The author of many volumes of poetry, his most recent collections are Li Bai Rides a Dolphin Home (2018), A Ladder of Cranes (2015), and For the Sake of the Light: New and Selected Poems (2009), all from the University of Alaska Press. His Lowell books are A Clock with No Hands and Bridge Street at Dusk. Among his honors are being appointed Poet Laureate of Alaska (1995-2000) and being named a Distinguished Alumnus of Lowell High School. Tom and his wife Sharyn have lived in Alaska since 1970. Recently, they have lived part-time on the coast of Maine.

Photos used courtesy of the Lowell Historic Board. Photos 2-4 are from the Lowell National Historical Park, photo 5 is from the Lowell Sun. Author photo by Kevin Harkins, used by permission of the photographer and Loom Press.