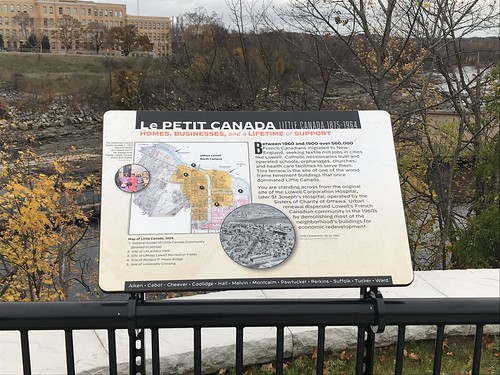 Congratulations and thanks to UMass Lowell for erecting four wayside exhibit panels about Lowell’s Little Canada neighborhood. I believe this project is part of the remediation agreement that allowed the demolition of the two surviving triple-decker residences that stood on Pawtucket Street at the Howe Bridge (photo below). 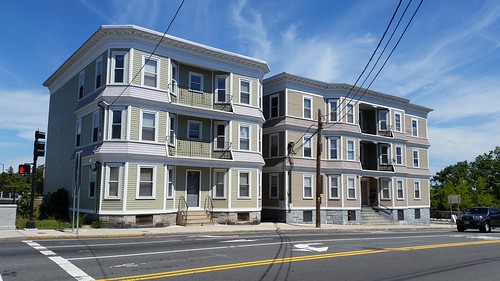 The Geography of Little Canada: Lowell’s Little Canada neighborhood extended from City Hall, up Merrimack Street to today’s Howe Bridge then extending northward to the Merrimack River. The main streets in the neighborhood were Aiken and Moody. Aside from the mills along the river (Lawrence, Suffolk, and Merrimack) the area was densely packed multifamily housing with associated retail.

Here is the verbiage on and location of the four panels:

PANEL 1 – Homes, Businesses, and a Lifetime of Support (on former site of two triple deckers on Pawtucket Street at Howe Bridge).

Between 1860 and 1900 over 560,000 French Canadians migrated to New England, seeking textile mill jobs in cities like Lowell. Catholic missionaries built and operated schools, orphanages, churches and health care facilities to serve them. This terrace is the site of one of the wood frame tenement buildings that once dominated Little Canada.

You are standing across from the original site of the Lowell Corporation Hospital, later St. Joseph’s Hospital, operated by the Sisters of Charity of Ottawa. Urban renewal dispersed Lowell’s French Canadian community in the 1960s by demolishing most of the neighborhood’s buildings for economic development.

Strategically positioned between waterways and adjoining mill complexes, Little Canada was one of the most densely populated neighborhoods in the United States in the late 1800s and early 1900s. Its distinctiveness was bolstered by the tradition of “La Survivance,” asserting a unique Canadian Catholic culture and stressing its preservation in a new land. Like many of Lowell’s historic immigrant communities, French Canadians lived in tightly packed tenement housing in close proximity to culturally identified religious, civic and commercial centers.

Starting as flimsy shelters located near the mills of Lowell, Little Canada grew to be a densely developed and largely self-sufficient neighborhood. You are standing near the original “Main Street” of Little Canada. Large wooden buildings on this site housed street-level shops below crowded tenement apartments. Women, children, and men walked to work in the adjoining mills and crossed the Northern Canal to attend St. Jean Baptiste cathedral and parochial schools.

PANEL 4 – Institutions of Community Resiliency (near entrance to LeLacheur Park).

Lowell’s French Canadian residents reinforced social connections through a rich tapestry of social clubs, civic and religious organizations, including the Club des Citoyens-Americains, Club Lafayette, and Club Passe-Temps, among many others. These institutions of community cohesion promoted social, cultural and charitable activities and have helped preserve and sustain Lowell’s Franco-American heritage even as most of Little Canada’s buildings were lost to urban renewal in the 1960s. They also offered members of the community comfortable places for entertainment and celebrations. 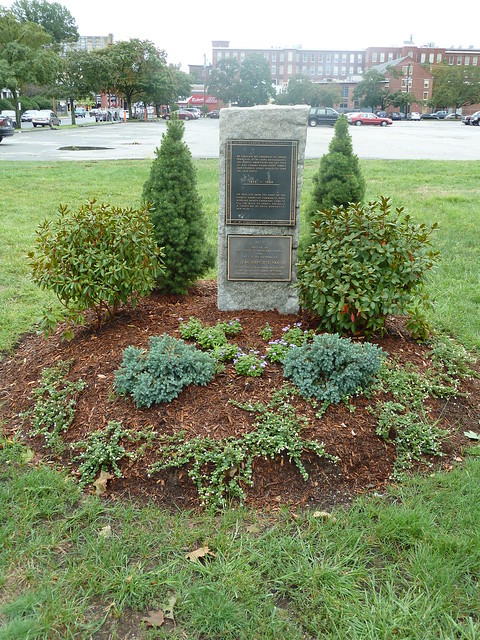 The panels join the existing Little Canada monument which was erected in 1977 at Aiken and Hall Streets. Here is the inscription on the monument:

On this site grew the heart of the Franco-American community. Hard working French Americans came to fill the mills of Lowell and build a tradition of faith, generosity, and pride.

Je Me Souviens! –  Lest We Forget!

This stone comes from one of the

apartment houses to be torn down

Here are some additional sources of information about Little Canada:

Charles Gargiulo has excerpts from his memoir, Farewell, Little Canada on this site here and here.

Paul Marion, whose grandfather owned and operated Marion’s Meat Market (photo above) in the heart of Little Canada, has a poem, New Pine Hill, that captures the sense of loss felt by all who lived in the neighborhood.

And UMass Lowell has a set of photos of the 1964 demolition of the neighborhood on the Internet Archive. Here is the text that accompanies those photos:

When Lowell’s Little Canada neighborhood was torn down in 1964 to make way for urban redevelopment, it represented the end of an era. “L’ptit Canada” was home to French Canadians and their descendants who had settled in Lowell at the turn of the century. Its 325 buildings were populated by over 2500 French Canadians who owned the plurality of the 110 apartments, restaurants, and businesses in the area. In the heart of the city, it was a hub of French Canadian culture. Many of the populace made their living working in the nearby Lawrence and other mills. There were French Canadian bookstores, markets, and social clubs with churches and parochial schools within walking distance. It remains the home of the Lowell Day Nursery, which remains one of the oldest child care centers in the United States.

The neighborhood arose in large part by Samuel Marin, one of the pioneer French Canadians in Lowell who arrived in 1857 and was employed by a Yankee dry goods firm. In 1865, he was hired by the textile corporations to recruit French-Canadian families from Quebec to work in the mills. His connections with the mill owners and subsequently the Locks and Canals Corporation allowed him to be the first developer of a large vacant area near the Lawrence Mills that became known as L’Ptit Canada – Little Canada. L’Ptit Canada became the Plymouth Rock of Franco life in Lowell. It was here that giant tenement blocks were constructed which housed scores of immigrant families, eventually creating the most densely populated living area in the United States except in parts of Brooklyn. With the decrease of the textile industry beginning in the 1920s, Little Canada, like other areas of Lowell, took on a well-worn look. In response to these conditions during the post-war era, federal urban renewal programs began to throughout the country. In many ways, Lowell was a model for future urban redevelopment projects as it was the first city to complete a commercial urban renewal project by using eminent domain to seize property from the private sector, then sell it back to the private sector. The Church Street urban redevelopment project, spearheaded by Union National Bank president Homer Bourgeois and city manager Frank Barrett became the prototype model.