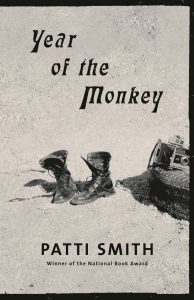 Patti’s is a dream book but not another Book of Dreams like Jack Kerouac’s (1960), published by City Lights in San Francisco (there’s that place circling back), his strange volume with eight years of transcribed fantasmic overnight features in Jack’s noggin, the cinematic shorts in his own private movie-house all “auteur”-like and highly plastic in their reality like the reports from Patti’s dreamscape that enter her book. When she came to Kerouac’s hometown, Lowell, Mass., in 1995 to celebrate and thank, I think, Jack-in-heaven, she shared the program with writer Herbert Huncke, the proto-Beat of Times Square, 1940s. Patti read poems and prose and then sang with musician-friends, including an earthy “Dancing Barefoot” in bare feet on a cheap Persian rug covering the makeshift stage at Smith Baker Center, an abandoned Congregational Church across from City Hall, the same stage that Allen Ginsberg and colleagues, Corso, Ferlinghetti, Michael McClure accompanied by Doors keyboardist Ray Manzarek, had performed on for the benefit of Mr. K. in late June 1988, surrounded by one thousand people, a full house, the night before the dedication of the Kerouac Commemorative sculptural tribute at French and Bridge streets downtown. Lowell Franco-American operatic bard Gerry Brunelle and I read that night also but we were like Jimi Hendrix at Woodstock the raggedy morning after, not much crowd left when we took our turn after the stars, squashed cups in the aisles, forgotten jackets on seats. 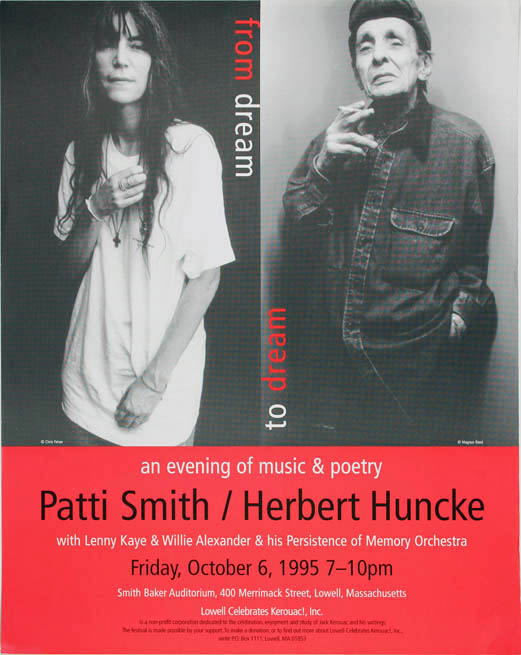 One Response to Patti Smith’s Trail: A Review-Essay