To wrap up our German Week, here’s a story I posted about a day I spent providing security for then Vice President George H. W. Bush during his 1983 visit to West Germany. 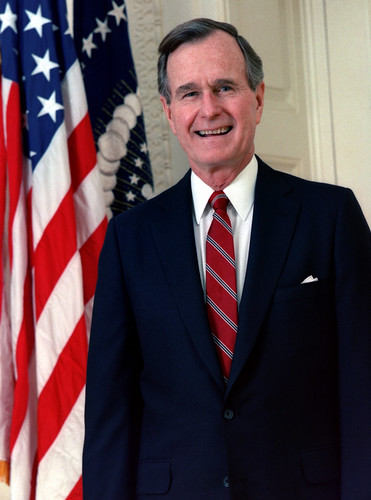 George H. W. Bush, the 41st President of the United States, died Friday at age 94. His funeral was held yesterday at the Washington National Cathedral and he will be buried today on the grounds of the George H. W. Bush Presidential Library in College Station, Texas. Since his passing, the media has rightfully written much about his life and accomplishments.

My own view of Bush is shaped by personal experience. Although I never met Bush in person, I once helped protect him. It was February 1983. Ronald Reagan had been President for two years and had ratcheted up American opposition to the Soviet Union, nowhere more so than in Central Europe. To emphasize the importance of that region and to boost the resolution of our NATO allies, Vice President George Bush travelled that winter to Europe on a multi-stop tour.

One of his destinations was the German city of Nurnberg to visit U.S. forces stationed in that area. The largest U.S. unit in Nurnberg at that time was the 2nd Armored Cavalry Regiment (2ACR). As one of that unit’s intelligence officers, I was assigned to be the liaison with the advance team of Secret Service agents who arrived a few days before the Vice President. I spent those days with the agents, driving the various routes the VP’s motorcade might take, identifying areas of concern, locating the nearest hospital – the level of preparation was immense.

By the end of that week – the Vice President would arrive on Saturday morning – the itinerary was set. Air Force 2 would land at the main Nurnberg airport. There, the Vice President and his party would transfer to Marine 2, a Blackhawk helicopter (brought from Washington since Blackhawks were still new and rare in Europe at the time) for an aerial tour along the Iron Curtain, the border separating East and West Germany. Because the 2nd Armored Cavalry was the unit responsible for patrolling the border in that sector, the Vice President’s tour guide that day would be the regiment’s commander, Colonel David Maddox who would later reach the rank of four-star general and command all US forces in Europe. 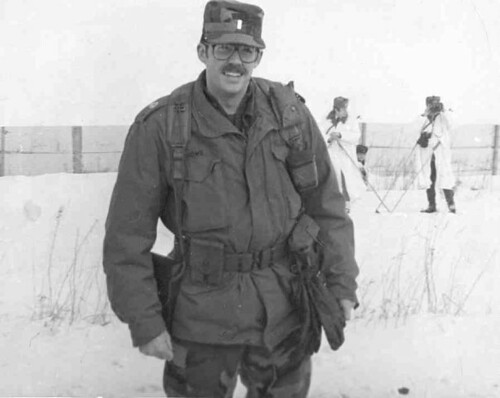 The plan called for Vice President Bush, Colonel Maddox, a couple of Army generals and the West German Minister of Defense to fly the trace of the border in Marine 2. The VP’s personal protection Secret Service detail would fly alongside in another Marine Blackhawk helicopter. The 2nd Cavalry was to provide several UH-1 Huey helicopters to carry members of the press and other functionaries.

The Secret Service also wanted another Huey with a team of soldiers to provide an additional security force. I was put in charge of that group, but someone insisted that the other six soldiers of the detachment should be Military Police (MPs). Since the 2ACR had no MPs of its own, a squad from the neighboring 1st Armored Division’s MP Battalion was assigned the task.

On the day of the visit, I reported to Feucht Army Airfield on the outskirts of Nurnberg, home base of the 2ACR’s aviation squadron. It was a beautiful winter morning with the temperature well below freezing but the skies clear. I dressed for being outside (which we often were in that unit) with long underwear and a heavy sweater underneath my BDUs (“battle dress uniform” or the Army’s first camouflage clothing of the post-Vietnam era) topped by a lined field jacket. When I met my MP companions for the first time at the airfield, I noted that their uniforms were better-fitting, better-mended and better-ironed than my own. Their boots were spit shined; mine were not. But as we waited to board our helicopter, I noticed a couple of them shaking slightly in the cold.

Soon we were aloft, speeding to the rendezvous point with the Vice President’s party. Through the windshield of our Huey, I could see the other helicopters flying in formation up ahead of us. The Vice President’s aircraft landed several times to meet troops on the ground and to see the border fence up close. My aircraft stayed in the air except for a quick stop for gas at a “forward area refueling point” or FARP (since the military loves acronyms).

As we rose up from our refueling stop, I noticed that the wooded hills I could earlier see off in the distance weren’t there anymore. They were shrouded in a dark gray cloudbank. The snowstorm that had been forecast for that afternoon had arrived sooner than expected.

Soon our helicopter was engulfed in a blizzard with near zero visibility. The hazards of that were multiplied by the number of other aircraft flying blindly in the same sector.

After some quick radio deliberations, the Secret Service decreed that rather than continue flying blindly all the way back to Nurnberg, we should all land at a small regional airport just outside the nearby town of Hof. (The two Marine Blackhawks were capable of instrument only flight but the older Army helicopters were not).

As I heard through my headphones the two pilots of my aircraft talking about the airfield being just ahead of us, I glanced out the side door and saw that we were just then flying perpendicularly across the airport’s runway. I mentioned this to the pilots who pivoted and set us down safely as did all the other helicopters including the one bearing Vice President Bush.

The Hof Airport barely deserved its name. It was in reality a single paved runway with a small terminal building topped by a second floor control tower. As the Secret Service hustled the Vice President into the building, they instructed me to set up a defensive perimeter around the building with the MPs. That I did, position two MPs at each of the entrances to the building.

Having grown up in Massachusetts and still young enough to remember being outside in a blizzard as a fun activity rather than an uncomfortable burden, the heavy snow, howling wind and single-digit temperature didn’t really bother me. As I continuously moved from outpost to outpost to check on my MPs, I found all of them shivering badly with a couple in tough shape due to the cold.

Since the intensity of the blizzard greatly reduced the risk of any intruders coming after the Vice President, I moved all the MPs inside the doors of the terminal where they could still provide some security without suffering frostbite. While my uniform may not have matched the appearance of those worn by the MPs, it provided plenty of cold weather comfort so I stayed outside.

Despite the howling wind, I could still monitor my borrowed Secret Service radio through its earpiece. A plan was taking shape: A convoy of vehicles was being mobilized to transport the Vice President and his party. About 15 minutes later, four medium-sized Bundeswehr (West German Army) trucks with over-sized tires turned into the airport’s entrance and pulled up to the terminal. A short time later, a powerful black Mercedes sedan with a familiar 2ACR Sergeant in the front passenger seat came plowing through the snow. The West German defense minister had scrambled the trucks from a nearby Bundeswehr base; the Mercedes was an armored sedan that had been pre-positioned in case any problems arose with the VP’s helicopter.

As the Vice President, the senior officers and the rest of the VIPs mounted the vehicles, I made my way down the driveway to the main road to stop traffic when the convoy exited: I didn’t want the VP’s sedan to be wiped out by a big snow plow in low visibility.

Soon the convoy was rolling down the driveway and out into the street. Tempted though I was to look at the departing vehicles to catch a glimpse of the departing Vice President, I focused my gaze in the direction of oncoming traffic (of which there was none because who would be crazy enough to be out driving in such bad weather). The convoy rolled away through the snow.

Momentarily distressed when the last vehicle in the convoy passed by without stopping to pick me up, I soon realized that the helicopter pilots and all the lesser ranking personnel had remained behind in the terminal building. I made my way up there but soon some American Army vehicles arrived to ferry us back to our home base in Nurnberg.

I learned later that the Defense Minister had called the Hof train station and ordered the Bundesbahn (the West German national railway) to delay the departure of the next train from Hof to Nurnberg. (If anyone is familiar with the militant on-time commitment of German railroads, you realize what a radical order that was). When the Vice President’s convoy arrived at the station, the Secret Service aided by German police cleared all the passengers from one of the first class railcars for the Vice President. The train sped to Nurnberg to a waiting Secret Service motorcade that sped the Vice President to Air Force 2 only 30 minutes behind schedule.

George H. W. Bush went on to serve five more years as Vice President and then a full term as President. I finished by tour of duty in West Germany later that summer and eventually returned to Lowell. He and I never crossed paths again, but my proximity to the Vice President in that German blizzard created for me a psychological bond that persisted until his passing last Friday.

My experience serving along the Iron Curtain also shaped my opinion of the Presidency of George H. W. Bush. He commanded at a time when Communism collapsed. For someone who only had known the Cold War and who had served an important role in the military during one of its most intense phases, the peaceful collapse of the Soviet Union and the Warsaw Pact was astounding. It could have gone very badly but Bush managed the process skillfully, ensuring continued peace in Europe and the emergence of the United States as the dominant power in the world for at least another decade.

I also have great respect for Bush’s military service during World War II in which he was a Naval aviator who was shot down by the Japanese while flying a torpedo bomber off a U.S. aircraft carrier and for a life devoted to public service.

Still, I can’t end this without mention that I find his legacy tainted at least a little by his tacit support of race-based attacks on Michael Dukakis during the 1988 presidential race. The electoral appeals to racism started by Richard Nixon in 1968 and amplified by Ronald Reagan in 1980 were ratified by Bush in 1988 and have been a central component of Republican national politics ever since. I’m fully aware that politics is a tough sport, but there are some lines that shouldn’t be crossed. Appeals to racism is one of them.

One Response to Archives: My Day with President Bush