“The Kerouac Book River is inspired by the legendary Merrimack and Concord rivers, which run through the author’s hometown of Lowell, Massachusetts. At the “source” of the river is the canon of first editions, beginning in 1950 with The Town and the City. Plentiful waters stir to rapids with Jack’s kinetic classic novel, On the Road, in 1957, and the current gains momentum with numerous tales drawn from a short life richly lived. Later editions surge and splash through high water on the way to the river’s mouth, which empties into the global ocean of readers.

“While this cover art illustrates how graphic artists and designers visualized Kerouac’s writings, it also shows how Kerouac’s North American narratives and poetry, translated into a multitude of languages, have spoken to generations worldwide. The Kerouac Book River draws from the holdings of the Jack Kerouac Collections at the UMass Lowell Libraries’ Center for Lowell History, as well as online resources. The presentation of these images is not for commercial use, as copyrights may reside with the publishers or cover artists.”—UMass Lowell 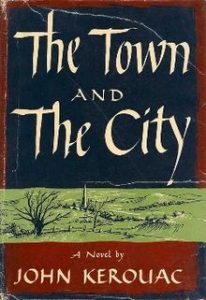 Folks at UMass Lowell have done a big thing for the literary legacy of Jack Kerouac. His centenary, 100th birthday, is two years away, which should be a major deal in the cultural news in America and world. But the Beat writers are not at their peak these days. A lot has changed since Kerouac and poet Allen Ginsberg and their friends constituted a dominant alternative force in our national culture. The country’s voice continues to diversify as more women and people of color tell their stories and describe new frontiers. Many people now know the Beats through artists they influenced, like Bob Dylan and Patti Smith, neither of whom is “forever young.” Kerouac’s signature novel On the Road (1957) stands as one of the key books of the 20th century and sells well here and in foreign countries. His first novel, The Town and the City, alluding to Lowell and New York City, appeared 70 years ago and was promoted with energy in the Lowell Sun newspaper, which ran text excerpts and photos of city places referenced in the book.

Can I tell you how much I like seeing this new graphic piece of public art on the web? The Kerouac Book River. Click here or on the title of this post above to see what has to be one of the outstanding presentations online when it comes to writers, U.S. and world. The pile up, the multiples, the current of design on the covers make a visual river ever-changing as it rolls and scrolls (that quintessential K form) digitally from spring-source to big mouth (Mouth) at the end, which is not an end, but which is a convergence with an ocean of consciousness, a cosmic sea into which flows, blends, feeds the river’s enormous cargo of heart, soul, and mind—it’s all there, the record, the statement, the oeuvre, the flowing shelf of titles, contributions of a packed life, a life soon over at 47 years old.

The author might say to us, “This is what it was like to be alive in my time,” as simple as that, as grand as that. “This is what I saw, felt, and thought, this is what love was for me, these are the stories I want to tell you, forever, the mind-movies I want to project on the inside of your skull, the insights that flashed in my head and which I sometimes was able to capture to save and share with you. This is my mural: Canada, U.S., Mexico, my North American vistas, my continental tale.”

That’s what he’s saying in the present sense because all these books are alive, the voices in print are talking to us each time we crack open a book like a holy walnut with goodness inside, not always sweet, sometimes bitter, but always sincere, the nut-meat with something to offer that has value.

The volume of images is so impressive. It’s a river, it’s a waterfall of covers, it’s a high tide of imagery. In situating Kerouac among writers of his time or of all time, there must be some way to underscore his accomplishment and proliferation of work. Not every author has the global reach that he has. He’s a cultural ambassador for the U.S. carrying the message of freedom and movement and love of the land.