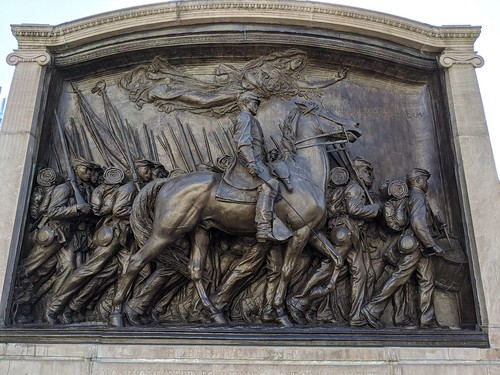 The 54th Massachusetts Infantry Regiment was activated on March 13, 1863, as one of the first African-American units of the American Civil War. Although the regiment was organized and trained in Boston, the African-American men who filled its ranks were recruited from around the northern states. Governor John Andrew appointed as the regimental commander Robert Gould Shaw, the 25-year old son of prominent Boston Abolitionists. Shaw, like all the other officers, was white.

On May 28, 1863, the 54th marched to the Massachusetts State House for an enthusiastic ceremony that featured the Governor, and then marched down Beacon Street and departed for Beaufort, South Carolina. Over the next six weeks, the 54th engaged in a number of raids and skirmishes against Confederate forces, but on July 18, 1863, it led the Union attack on Fort Wagner which guarded the entrance to Charleston Harbor. (This attack formed the climactic scene of the 1989 Academy Award-winning movie Glory which starred Denzel Washington, Morgan Freeman and Matthew Broderick). 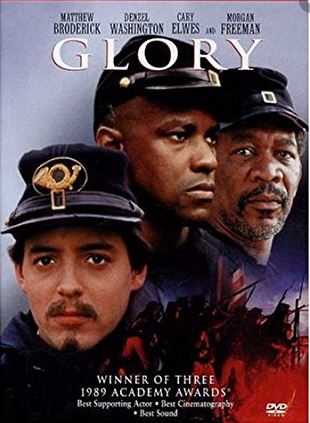 Although the attack on Fort Wagner failed and made casualties of nearly half of the 600 men in the regiment, including Colonel Shaw, who was killed, the determination and demonstrated heroism of the soldiers immortalized the 54th. 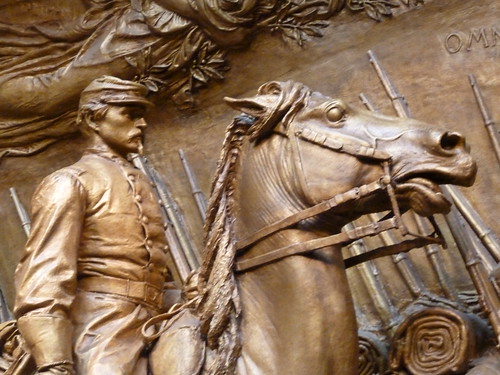 After the war, veterans of the 54th along with prominent Massachusetts politicians, began raising money to erect a monument to Colonel Shaw. However, it was not until 1884 that advocates selected Augustus Saint-Gaudens to sculpt the monument. Saint-Gaudens worked on the sculpture for 13 years. It was eventually unveiled on May 31, 1897, on the edge of the Boston Common, just across the street from the Massachusetts State House. The monument was recently removed for a planned refurbishment and should be reinstalled later this year. 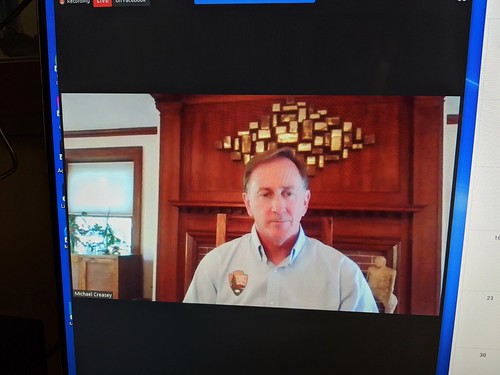 This past week, the Boston National Historical Park (which owns the statue) in partnership with other organizations hosted an online session on “The Power of Public Monuments in a Time of Racial Reckoning.” Michael Creasey, the Superintendent at National Parks of Boston (and formerly Superintendent of Lowell National Historical Park) introduced the session which was moderated by Karen Holmes Ward, WCVB’s Director of Public Affairs and which featured Renée Ater, Associate Professor Emerita of American Art at the University of Maryland and Visiting Professor, Brown University, and David W. Blight, Sterling Professor of History and Director of the Gilder Lehrman Center for the Study of Slavery, Resistance, and Abolition at Yale University (and author of a Pulitzer Prize-winning biography of Frederick Douglass). 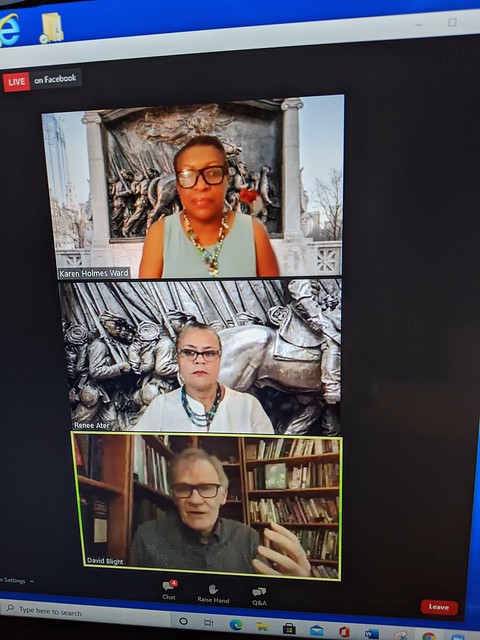 Here is some of what was discussed:

David Blight – This monument is unique. There’s not another one like it in the US. Many say it’s the greatest work of public art in the US. Why is this monument different? There are thousands of generic lone Civil War soldier monuments across America. But what does a single figure mean? This monument tells a story about what the war was about. It captures an historical moment, late May 1863, they actually marched past this point. It captures realism and idealism. This is a monument about some very old fashioned ideas that we are not comfortable with: honor, duty, dying for cause and country. 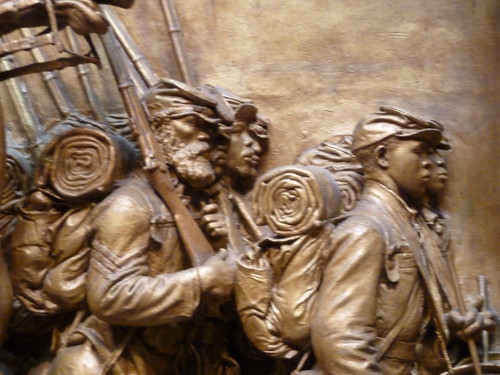 Renee Ater – This sculpture took 13 years to complete. Saint-Gaudens used random African-American men from Boston as models for the marching soldiers and not the actual survivors of the 54th who were still around at the time. Augustus Saint-Gaudens (ASG) was a portrait artist as well as a sculptor. He amalgamated these men into the 23 bodies seen on the monument. He also merged three distinct forms of sculpture – equestrian; bas-relief; and allegorical representation – into a single monument. No other monument makes these three elements come together. ASG had issues around race. He wanted to focus on the equestrian part but Shaw’s family encouraged him to include the soldiers. Their names are on the back of the monument (they weren’t added until 1981). ASG sought the individuality of these men and therefore made each face unique.

David – He’s trying to capture different age groups which reflects the actual makeup of the unit. ASG is a fascinating man. A prodigy. This was unveiled in 1897. One year after the U.S. Supreme Court’s “separate but equal” decision in Plessy v Ferguson. A time when lynchings were occurring all across the country. This monument was unveiled at a time when race relations in the US were about as bad as they ever had been.

Renee – Some have raised questions about the racial hierarchy depicted by this monument, the white man on the horse, high above the Black men on the ground. Renee sees the racial tension embedded in the monument. The freedoms that were the objective of the Civil War have not been carried out.

David says the monument is about promise and betrayal. He adds that ASG captured exactly what happened in reality. The commander would be on horseback. The soldiers aren’t being subservient. They are in the army. That’s what the army is about. What you see in the monument is what you saw on the street in 1863.

Renee adds that it is also allegory. The horse shows naturalism. This also asks what does it mean to go to war or to face battle? She points out the female figure up above the men. She holds an olive branch symbolizing peace and poppies symbolizing death. There are also pine cones which are suggestive of the south.

Renee – The Boston Common has a complicated history with race and there has been some criticism for placing this monument on the edge of the Common. But having it right across from the State House is very powerful.

David – there’s no way the monument should be removed. But the bus stop should be moved from in front of it. The National Park Service has done a good job of interpreting the Civil War through this monument. We have to “do more history” about this. The monument itself has amazing history and what it represents is amazing history.

Renee visits it every time she visits Boston. She thinks some monuments should come down. There’s no place for Confederate monuments in the US. The symbolic violence of some monuments is intense. Some monuments are no longer effective and should be removed or relocated to museums. But intense feelings have always resulted when we are engaging with monuments.

David – There is a desperate need to celebrate and memorialize Emancipation. We’ve spent 150 years on the Civil War. It’s time to cover Emancipation.

Renee says we should have a pause. Monuments have never really answered complex questions about race. There should be a moratorium on monument-building. We need a fundamental rewriting of our history textbooks. We need more green spaces where people can gather and discuss things.

David says “we can’t purify the past.” Look at the whole idea of memorialization. Look at what Germany has done with Holocaust Memorials. How have other cultures dealt with their most divisive events? How do we examine “the hardest parts of our past?”