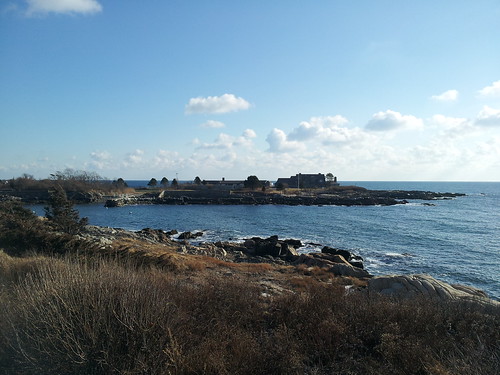 Last week’s funeral service for Congressman John Lewis with eulogies offered by three past Presidents was on my mind as I scrolled through the archives for this week’s look-back post. And so I selected this piece about another former President whose stature has only improved with recent events.

After seventeen years, three months, six days and two hours of gawking at the Bush family I finally met former President George HW Bush (41). I went to Kennebunkport last Sunday to attend an art show. (Trust me, I buy prints, not originals).

This show was of special interest to me because the local art association was holding it in the Kennebunkport Yacht Club. I love old buildings, especially those with history. I wanted to see this building for years but, it’s members only and well, I buy prints not originals.

The show was actually being held in two building, one across the street from the other. My wife and I entered the first beautiful old building. We strolled around looking at the prints. As I approached the ocean side of the building I saw two US Secret Service boats, each manned by four or five uniformed agents. Fidelity III was docked      between the two Secret Service boats. Fidelity III is former President Bush’s boat.

How long have I been stargazing the Bushs?  I remember seeing Fidelity I in the cove at Walker’s Point when the elder Bush was president. I said to my wife, “The President must be mooring Fidelity here now.” Behind me, I heard a know-it-all say to his friend, “The president is across the street. Do you want to go and see him?”

My ears perked. “Hey, did you hear what that guy said? Let’s go over and see if Bush is there.”

As soon as my wife and I entered the second Yacht Club building I saw the President’s daughter, Dora, but no President. I looked at a few paintings, then said to myself “What are you doing! These aren’t prints, they’re originals! You’re not interest in this stuff. Go see if the former President is really here.”

I looked down the first aisle no President, the second, no President. Then in the third aisle, there he was, standing beside Barbara Bush and talking to a Kennebunkport friend. The atmosphere in the hall was so casual it would have been awkward to approach him. I moved toward the president but kept my distance. How close was I to him? Well, I heard him tell one person he ate so much Mexican food for lunch he didn’t know if he’d ever eat again.

He strolled to the next aisle. I followed slightly behind. Another person walked by him and said “Hi.” it was definitely another friend. It was amazing. Everyone seemed to know him and not one of them was looking at prints.

At this point George had separated from Barbara. Then, finally, he walked by me. I could resist no more.

“Mr. President,” I called out.

Startled, he turned and walked over to me. “Yes?”

I was in awe. I had waited for this moment for seventeen years, three months, six days and two hours. But nothing came out of my mouth. I stuck out my hand. He took it and shook it. I was surprised. His hand was very large and muscular, mine was mush.

I finally did utter “I hope you are having a good summer.”

“Why, thank you young man (me young?). I am so far.” He walked away and I continued to pretend to be interested in the rest of the paintings.