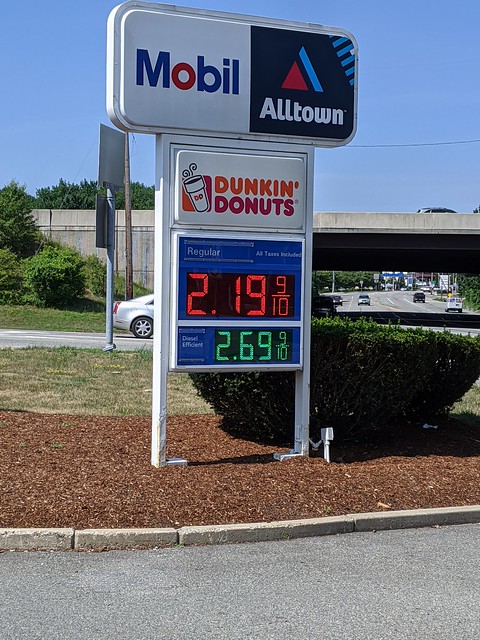 A Perfectly Strange Day at the Beach

This essay, written in July of 2008 during the last economic crisis, seems apt for our current times.  On a recent  Sunday morning, a two weeks before the 2020 July 4th holiday, we took our first ride to the beach hoping that we had left early enough to snag what we expected were limited parking and beach spots.  We found things to be the same but different from a dozen years ago.  We took the back way to North Hampton and again encountered little traffic.  We turned into an open food stand across from the ocean in North Hampton for a smoothie and a rest room stop but when we cruised south to try to find a parking spot in the center, the parking area wasn’t just empty but completely off limits.  So we figured we’d try Hampton State park and as we approached it appeared less than half full and we were optimistic that we could find a properly distanced spot on the beach.  We made the turn into the drive but a “Full” sign deflated our hopes for a few hours of sand and surf.  No wave riding, no salt-water taffy, seaside reading, no pinball.  But on the upside, no four-dollars per gallon of gas, no greenheads and no sunburn.

So it was back home to isolate in the yard with tunes by the Beach Boys and the Boss providing, if we closed our eyes, the illusion of a perfectly normal day at the beach.

It was Sunday, Independence Day weekend, 2008.  The weather was sunny and warm, with a light breeze—a perfect beach day except for the likelihood of traffic tie-ups, the mirage of parking spaces, long restroom lines and hungry greenheads.  Still, the seaside beckoned and Nancy and I decided to cruise on up to Hampton Beach State Park and enjoy a few hours of sun and sand and surf.

We packed an umbrella and towels, a box of Cheez-Its and some drinks, sun block and books and off we went.  We drove up 495, looking forward to our first salt water dip and our first box of salt water taffy.  Before long my mental IPod began playing a West Coast/East Coast medley of Beach Boys and the Boss—California and Jersey shores colliding.  Somehow it fit and all seemed fine until we hit the 95 exit when suddenly we sensed that something wasn’t right.  Breezing by the Seabrook Fire Station on 286 the unease increased and by the time we ran the gauntlet between Marquis’ and Browns’ restaurants, we realized something was downright bizarre.  Turning into the state park’s gravelly, sundrenched parking lot, the surf music faded, replaced by the memory of the premiere episode of The Twilight Zone, Where is Everyone.  In it an astronaut is being tested for the effects of isolation on long distance space flights.  He hallucinates that he’s in a seemingly normal town except for the absence of other people.  His paranoia builds as he dashes from building to building, almost, but never finding anyone.  Doors creak as if opening and closing, food cooks on a stove, a cigarette smolders in an ashtray and yet he seems to be just a moment behind or a corner removed from the presence of others.

That was how we felt—little traffic, plenty of parking, no lines at the restrooms.  It should have been ideal but it seemed odd and strangely desolate.  Not right for any summer Sunday, never mind the July Fourth weekend.  Did we miss a reverse 911 alert that the Seabrook power plant was about to blow?  Were Great Whites prowling the coast?  Had the tide turned as green and slimy as the Chinese Olympic sailing venue?  It couldn’t be the forecast of possible showers – that never seemed to keep people away before.

It was, strangely enough, in the men’s room that I finally got a reasonable idea of what was keeping people away on such a beckoning beach day.  I was washing my hands when the only other patron, standing at a urinal, cried out, “Heavens to mergertroid!  Do you believe it? Fourth of July weekend and it’s just you and me.”

“Yeah, pretty quiet,” I replied weakly without inflection, unable to tell if there was enticement or entrapment in his voice.  Either way, I wasn’t going for the bait.  I cut short the rinse cycle and grabbed for the paper towels.

“I never thought I’d see this,” he continued as I scooted for the exit, “gas at four dollars a gallon keeping people away from the beach!  I’m not complaining, but…”

“That’s it!” I thought as I scanned the parking lot and realized that the gregarious bathhouse economist was probably right.  Considering Hampton draws heavily from the Merrimack Valley and 495 corridors, not a terribly long ride, it was startling to see the lot better than half empty at that time of day on that weekend.  Could times be so difficult, gas prices so high, budgets so tight as to preclude, under such perfect conditions, a packed parking lot on the high holiday of summer fun?  I worried that this might tell us more about the state of the economy than any of the official surveys and leading economic indicators do.

I dwelled on this briefly as I slathered on some SPF 30 and settled down next to Nancy.  Even though high tide had narrowed the beach considerably, we were surrounded by a wide expanse of sand.  There were neither greenheads, nor sand fleas nibbling at our flesh.  I devoured a couple handfuls of Cheez Its, chewed on some molasses taffy and continued reading Dave Daniels’ latest book, The Reunion.  Except for the new and troubling idea nibbling at the back of my mind that I might not be able to afford the drive home, it was a perfect day at the beach.