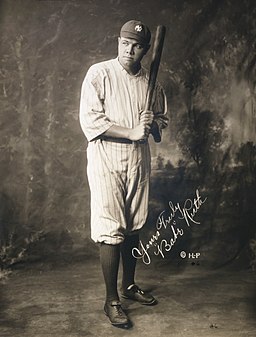 Life is all about contingencies. In this story, legendary baseball writer Chaz Scoggins explains how a former major league player, frustrated in his effort to purchase the professional baseball team in Lowell, settled into a scouting job with the Red Sox and helped bring Babe Ruth to Boston.

Ruth and the Red Sox

Boston Red Sox fans are painfully aware of the so-called “Curse of the Bambino,” which claims that the reason the Red Sox did not win another World Series for 86 years after 1918 because owner Harry Frazee sold Babe Ruth to the New York Yankees in 1920. The Yankees, who had never even played in the World Series before the arrival of Ruth, won 26 World Series before the Red Sox won another one following the infamous transaction. Ruth played on three World Champions during his six years in Boston, including pitching 29 2/3 consecutive scoreless innings in Series play, a record that stood until 1961.

Frazee’s deal haunted four generations of Red Sox fans. They could have been spared this multi-generational ordeal had the owner of the Class B New England League’s Lowell Tigers been less stubborn during the winter of 1908-09. Were it not for Lowell owner Al Winn, Babe Ruth might never have played for the Red Sox at all, and Red Sox history would be very, very different.

Winn had owned the Tigers since midway through the 1906 season. But after three losing seasons, he was becoming disillusioned with baseball and indicated he would entertain offers for the Tigers. On November 9, 1908, former major-league star outfielder Patsy Donovan toured Lowell’s Washington Park, the home of the Tigers, escorted by Herb Webster, who was acting as Winn’s agent while the 27-year-old owner was attending classes at Harvard Law School.  Donovan had hit .300 and stolen 518 bases during a 17-year major-league career, and he had just been let go as manager of the National League’s Brooklyn Superbas. Born in Ireland but having lived in Lawrence since he was three, Donovan wanted to become an owner.

Donovan repeatedly approached Winn about buying the club, but was rebuffed time and time again, along with all other suitors. Winn ultimately decided to hang onto the Tigers. In June the NEL would force Winn to sell his neglected ball club. But by then Patsy Donovan was out of the picture.

Frustrated in his bid to own the Lowell Tigers, that spring the jobless Donovan took a job as a scout with the Red Sox, and he managed the team in 1910-11, replacing Fred Lake, the former Lowell owner-manager. Back to scouting in 1913, and acting on a tip from Bob Hart, a home-grown former Lowell Tigers outfielder and by then an umpire in the minor International League, Donovan took a look at a raw, 18-year-old lefthanded pitcher named George Herman Ruth, who was pitching for his hometown Baltimore Orioles.

In an interview with The Lowell Sun from the mid-1920s and reprinted in 1934, Bill Carrigan, the manager of the Red Sox from 1913-16, explained how they discovered Ruth.

“I got a letter from Bob Hart, (now a) National League umpire. He was umpiring then in the International League back in 1914. It was in the days of the old Federal League, and things were pretty shaky in baseball.

“Hart said there were a couple of pitchers with the Baltimore club that looked pretty good. One of them, (Ernie) Shore, was ready for big league duty, he thought, and the other one, Ruth, was a pretty good prospect although not quite ready.

“We were in New York at the time. Patsy Donovan was scouting for the Red Sox then, so I had him go to Baltimore. His instructions were to follow the team around and see whom he liked. Soon, Pat’s report came back. He liked Shore and Ruth.”

Baltimore owner Jack Dunn initially wanted $25,000 for the two pitchers. But Red Sox owner Joe Lannin held out, and with the minor-league Orioles being killed at the gate by the Federal League’s Baltimore Terrapins, a desperate Dunn finally buckled. The Red Sox bought Ruth and Shore, with catcher Ben Egan thrown in as a bonus, from the Orioles for $16,000.

“The dope on them was perfect. Shore was all ready, but Babe wasn’t. We kept him around for two months or so and then sent him to Providence on option and recalled him the next year. That’s how Babe came to Boston, and we have Hart’s advice, Patsy Donovan’s judgment, and Jack Dunn’s cut price to thank for it.”

But if Donovan had bought the Lowell Tigers in 1909, Ruth may never have pitched and played for the Red Sox, and maybe today Red Sox fans old enough to remember nearly nine decades of championship famine would have a much different perspective on their team.

NOTE: Those of you who read yesterday’s Keith Academy 1950 Baseball post may be aware of the connection between Babe Ruth and Keith Academy. Ruth grew up in Baltimore and attended St. Mary’s Industrial School for Boy’s which was operated by the Xaverian Brothers, the same order that staffed Keith. Several of Ruth’s former teachers, including Brother Gilbert who was Ruth’s baseball mentor and the person credited with getting him signed by the Baltimore Orioles, ended up teaching at Keith.

One Response to Ruth and the Red Sox