Here’s a post from eleven years ago as the country was trying to recover from the Great Recession. In the midst of the pandemic and its resulting economic distress, it seems a timely reminder that the old saying “in crisis there is opportunity” applies to city planning too. 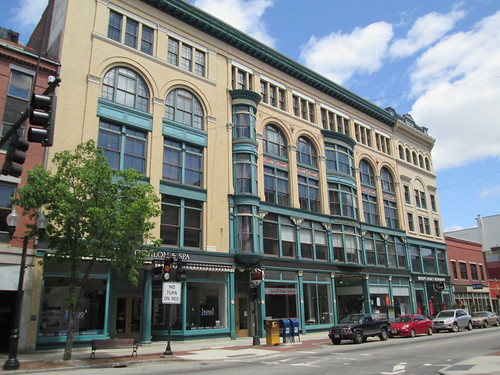 Is Lowell Ready for Its Next Rebirth?

June can be a depressing month for those interested in civic affairs. More often than not, budget deliberations by the legislature at the state level and the city council and school committee at the local level have been about cutting back, about what can’t be done rather than what can be accomplished. This year’s fiscal crisis makes the current budget deliberations the most painful and difficult in my memory. Still, history demonstrates that the seeds of major accomplishments are planted at the time of greatest difficulty: in crisis there is opportunity.

Fifteen years ago, the city was at a similar crossroads. When that era’s real estate bubble burst in the early 1990s, Lowell was hit especially hard. Back then, there were considerably more foreclosures than what we’ve seen in the current collapse. Venerable financial institutions like the Central Savings Bank and the Lowell Institution for Savings, both almost as old as the city itself, were seized by the FDIC and ceased to exist. Residential condominiums that were recently selling for six figures suddenly cost less than a new car. The city’s largest employer, Wang, teetered on the brink of bankruptcy. Municipal finances were still overseen by a state-controlled finance board and the most recent city election saw the replacement of two-thirds of the city council.

By the close of 1995, however, Lowell had completely reversed its decline and the foundation of the city’s most recent renaissance had been laid. In the span of about 20 months, the long-vacant Bon Marche Building had been renovated and fully occupied, restoring what is perhaps the key building in downtown Lowell to its former prominence. Wang’s hard times had caused the company to abandon its world-wide training center on East Merrimack Street but that vacant building became the hub of Middlesex Community College’s Lowell Campus. The Wang Towers on Chelmsford Street were auctioned off for the absurdly low price of $500,000, yet within months NYNEX signed a long-term lease on the towers (soon called Cross Point) with major assistance from the city council in the form of a financial guarantee (which ended up costing the city not a penny). NYNEX’s decision brought a flood of new tenants to the Towers which have been fully occupied ever since. Simultaneously, the city was building more new schools and securing the funds needed for the arena and the ballpark.

Despite today’s dire fiscal situation, opportunities for a refresh of the city’s forward movement seem everywhere in evidence. UMass Lowell’s acquisition of the hotel and soon the arena will give each of those facilities a second chance at becoming the thriving centers of activity that their earliest promoters envisioned. The new lease on the ballpark should ensure its continued success. The diverse elements of the city’s cultural economy are drawing on their innate resilience and creativity to not only survive these tough times but to emerge from them stronger than ever. Middlesex Community College, as evidenced by its acquisition of the Rialto Building, is poised to partner with UML in transforming the center city into a college town with all of the accompanying benefits. Outside of downtown, work continues on the Plain Street site of the new Target Store and on the Industrial Ave site of Lowe’s. And behind a curtain of old mill buildings, work continues in the Hamilton Canal zone in what should be the city’s largest and most significant development since the city’s founding.

I’m not a cheerleader but I do consider myself to be a historian and the similarities between the opportunities present today and those present in the mid-1990s are unmistakable. But nothing is inevitable. In the midst of last decade’s resurgence, I recall attending some event at the hotel sponsored by then State Senator Dan Leahy. The guest speaker was then Senate President Billy Bulger. Along with an endless string of humorous quips, Bulger said that the task of keeping a city moving forward was a constant struggle and the thing he always admired about Lowell was that despite all the challenges and setbacks, the people of Lowell always fought back, usually with success. Will the city’s current leadership have the long-term vision needed to grab these targets of opportunity as they emerge?