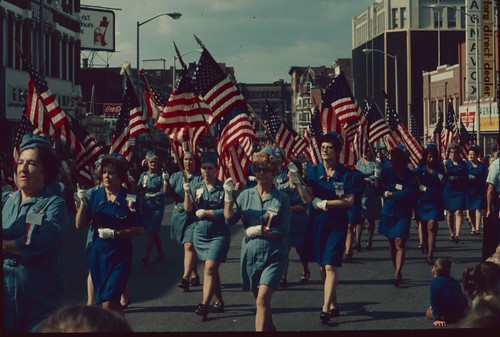 Today is Flag Day which observes the June 14, 1777, vote by the Second Continental Congress adopting a national flag of the United States which was to be “thirteen stripes, alternate red and white; that the union be thirteen stars, white in a blue field, representing a new constellation.”

In 1916, President Woodrow Wilson officially proclaimed June 14 to be Flag Day and in 1949 Congress passed a similar authorization, although Flag Day has never been a national holiday.

Today, Flag Day (June 14) is overshadowed by Father’s Day (the third Sunday of June) but one hundred years ago, Flag Day was a big deal in Lowell.

In 1914, Flag Day was celebrated with a big parade that left Memorial Hall (now the Pollard Memorial Library) at 3pm and marched to the South Common where more than 6,000 people listened to speeches and music. Buildings throughout the city flew American flags and men wore flag pins in the lapels of their coats. Participants in the parade included Civil War veterans of the Grand Army of the Republic; Spanish War Veterans; Boy Scouts; and 300 school children. A highlight of the event came when guest of honor Judge Samuel Hadley led those in attendance in the singing of “Marching Through Georgia” a song about General William Sherman’s devastating (to the Confederacy) Civil War campaign in Georgia. The singers were accompanied by the Middlesex County Training School band.

Flag Day 1915 saw an even bigger crowd gather on the South Common. This year, 13,000 people filled the Common for more speeches and patriotic music. The highlight of the 1915 event came when 500 school children dressed in red, white and blue positioned themselves in the Summer Street grandstand to form a giant American flag.

In 1918, the parade began at 7pm and marched from Memorial Hall down Dutton to Market to Central and on to the South Common. Congressman John Jacob Rogers was the principal speaker and the entire event was organized by the Lowell Lodge of Elks. Members of the Elks were to wear “dark clothes, straw hats and purple ties.”

In 1925, the Lowell Flag Day ceremony shifted from the South Common to the recently-constructed Lowell Memorial Auditorium where the Elks held a “most elaborate program and ceremony” at 8pm. All Elks gathered at their Lodge on Warren Street at 7:15pm and then marched to the Auditorium for a ceremony of speeches and music.

In 1935 there was no formal citywide program for Flag Day. Observances had shifted to the schools where teachers spoke on the significance of the flag and students recited the pledge of allegiance and sang the National Anthem (two things that weren’t done regularly at the time). Also, the pledge they recited went as follows:

I pledge allegiance to the flag of the United States, and to the republic for which it stands: one nation, indivisible, with liberty and justice for all.

With World War Two underway, Flag Day in 1942 was a huge event which was combined with Safety Day and Civilian Defense Day. Despite rain, June 14, 1942, witnessed “one of the greatest parades ever held in greater Lowell in observance of Lowell’s part in the war effort.” Several thousand marched and more than 50,000 watched. The parade began at 2:30 from Gorham at Elm then proceeded down Gorham to Central to Merrimack, past the City Hall reviewing stand and ending at Suffolk Street.

In 1947, the front page of the local newspaper made a brief mention of Flag Day: “Old Glory came in for its honors today with the annual observance of Flag day. Although not a legal holiday, June 14 has been set aside as a date on which homage is paid to the Stars and Stripes since congress passed a resolution in 1777. Fitting exercises marking the occasion were held in several local schools yesterday.”

It seemed that after World War Two ended, Flag Day no longer warranted any large scale civic observances. There was no mention of it on the front pages in 1950, 1951, 1952 or 1953. In 1954, Monday, June 14 was a “nationwide air raid test” with 54 cities in America, including Lowell, holding massive air raid drills. In Lowell at 10am that day, the local Civil Defense coordinator sounded the city’s sirens which “shrieked a warning of impending disaster.” Police ordered pedestrians into the bomb shelters of the nearest building. Drivers pulled to the curb and followed into the shelters. Drill lasted for 10 minutes and then the “All Clear” was given.

Flag Day was barely mentioned in the local newspapers throughout the 1960s and early 1970s. In 1977, on the bicentennial of the adoption of the Flag, there was a front page photo of a city worker placing hundreds of small American flags in the grass around City Hall. The DPW Commissioner explained that the city had a large inventory of these flags left over from the nation’s 1976 Bicentennial celebration.

In recent years, the Greater Lowell Veterans Council has conducted a Flag Retirement Ceremony on Flag Day. When a flag become worn and unserviceable, the proper way of disposing of it is to burn it in a respectful, dignified ceremony. The Lowell Veterans have from time-to-time conducted such a ceremony at Westlawn Cemetery. Below are some photos from that event. 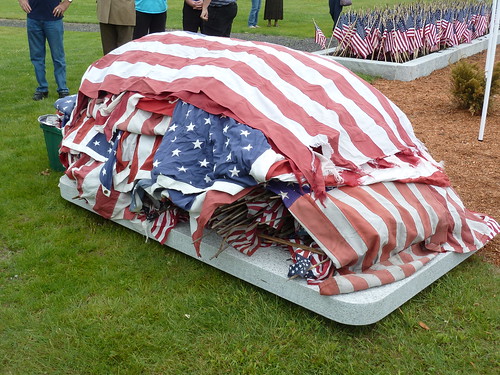 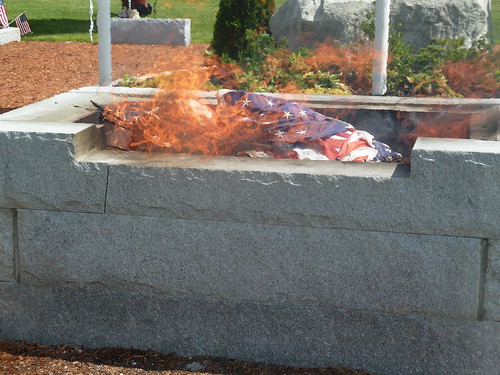 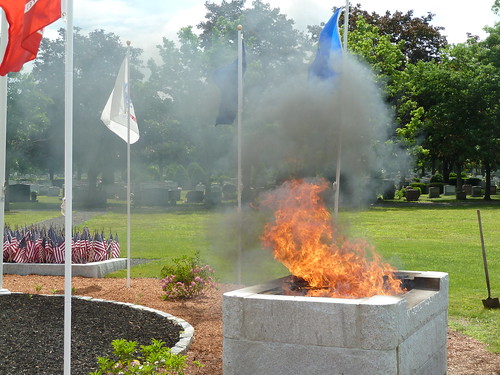 One Response to Flag Day in Lowell