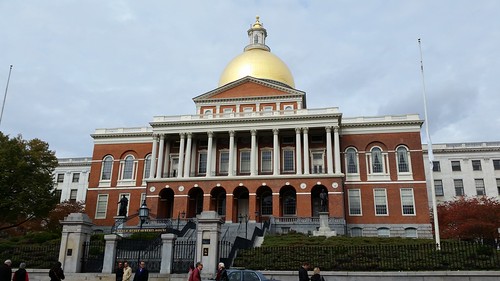 On November 18, 2003, the Massachusetts Supreme Judicial Court announced its decision in Goodridge v. Department of Public Health (440 Mass. 309). Here are the opening lines of the decision written by Chief Justice Margaret Marshall:

Marriage is a vital social institution. The exclusive commitment of two individuals to each other nurtures love and mutual support; it brings stability to our society. For those who choose to marry, and for their children, marriage provides an abundance of legal, financial, and social benefits. In return it imposes weighty legal, financial, and social obligations. The question before us is whether, consistent with the Massachusetts Constitution, the Commonwealth may deny the protections, benefits, and obligations conferred by civil marriage to two individuals of the same sex who wish to marry. We conclude that it may not. The Massachusetts Constitution affirms the dignity and equality of all individuals. It forbids the creation of second class citizens. In reaching our conclusion we have given full deference to the arguments made by the Commonwealth. But it has failed to identify any constitutionally adequate reason for denying civil marriage to same-sex couples.

We are mindful that our decision marks a change in the history of our marriage law. Many people hold deep-seated religious, moral, and ethical convictions that marriage should be limited to the union of one man and one woman, and that homosexual conduct is immoral. Many hold equally strong religious, moral, and ethical convictions that same-sex couples are entitled to be married, and that homosexual persons should be treated no differently than their heterosexual neighbors. Neither view answers the question before us. Our concern is with the Massachusetts Constitution as a charter of governance for every person properly within its reach. “Our obligation is to define the liberty of all, not to mandate our own moral code.” (citations omitted).

The decision was the first by any state’s Supreme Court to hold that same-sex couples had the right to marry. It was a close decision, with four justices supporting the outcome and three dissenting. (Voting in favor were Marshall and Justices Roderick Ireland, Judith Cowin and John Greaney; dissenting were Justices Robert Cordy, Francis Spina and Margaret Sosman.

With the support of Governor Mitt Romney, opponents of the decision set out to amend the Massachusetts Constitution to limit marriage to opposite sex couples. The process of amending the state constitution is complicated. If the proposed amendment begins as an initiative petition, the proposed amendment must receive the votes of 25 percent of the members of both houses of the state legislature sitting in a joint meeting as one body in two successive legislative sessions. If it meets that threshold, the measure would then appear on the ballot at the next state election.

The proposed amendment, which would Constitutionally define marriage as the union of a man and a woman, came before the full legislature sitting in Constitutional Convention on January 2, 2007. There were 62 votes in favor and 132 opposed. Those 62 votes constituted 32 percent of those voting and so the necessary threshold of 25 percent was achieved.

The legislature convened again for the required second vote on June 14, 2007. If the measure again met the 25 percent threshold, its next stop was the November 2008 state election ballot. Here’s what I wrote that evening, after the vote was held:

Today’s Constitutional Convention defeated the ban on gay marriage by a vote of 45 to 151. To recap this issue, a petition to place a referendum that would amend the Massachusetts Constitution to ban gay marriage required the support of 25% of the state legislature at two successive Constitutional conventions. It had already achieved that amount of support last year. If the ban had received the votes of 50 or more senators and representatives today, it would have appeared on the state ballot in 2008. By only receiving 45 votes, this referendum effort is dead.

The Lowell delegation was split with Tom Golden and Kevin Murphy voting against the measure and Steve Panagiotakos and Dave Nangle voting for it.

The Democratic Congressional candidates [in the special election to replace Marty Meehan] have all weighed in on the ban on gay marriage.  Representatives Jamie Eldridge and Barry Finegold voted against it. Jim Miceli voted for it.

Three years ago I rallied on the steps of the State House with my daughter in support of same-sex marriage, and today the work of thousands of people dedicated to marriage equality has finally paid off. I am pleased that the legislature reflected the will of the majority of Massachusetts’s residents by recognizing that constitutional amendments should not limit rights but expand them. We can all be proud that we live in a state where the civil rights of all our citizens will be protected. Our state and nation are stronger for this commitment to defending the rights of all people and for putting a high value on the principles of tolerance and human dignity.

While Eileen Donoghue released this one:

I applaud Massachusetts legislators today for their courageous vote against adding discrimination to the state Constitution. I have always supported equal marriage rights and will continue to fight for the extension of those rights as a representative in Congress.

While the supporters of gay marriage are jubilant, the pro-ban side will have much to say about the people being deprived of their right to vote. But the winning side played by the rules. Everyone had to publicly vote on it; it wasn’t killed by some procedural shenanigans.

As for the right of the people to vote, no less of an authority than James Madison would be skeptical of such a procedure. In this famous essay on the U.S. Constitution, Federalist 10, Madison wrote that in a pure democracy (where each person has an equal vote) . . .

“A common passion or interest will, in almost every case, be felt by a majority . . . and there is nothing to check the inducement to sacrifice the weaker party. Such democracies inevitably become spectacles of turbulence and contention.”

Madison argued that our republican form of government where the power of the government is delegated to a small number of citizens elected by the rest is far superior.

“[The effect of republican government] is to refine the public views by passing them through the medium of a chosen body of citizens, whose wisdom may best discern the true interest of their country, and whose patriotism and love of justice, will be least likely to sacrifice it. Under such a regulation, it may well happen that the public voice pronounced by the representatives of the people will be more consonant to the public good than if pronounced by the people themselves.”