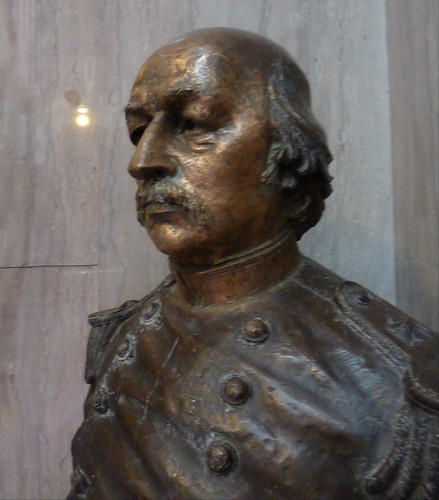 As part of my ongoing Virtual Lowell Walks series, I have created three videos on Civil War Lowell. The first, called Lords of the Loom, covers the conflict in Lowell between the city’s cotton-based economy and a strong movement to abolish slavery.

The second episode, The Minutemen of 1861, tells the story of the attack on Fort Sumter which started the Civil War and the response of the Lowell-based Sixth Massachusetts Volunteer Infantry Regiment, whose soldiers were the first to be killed by hostile fire in the war.

On April 19, 1861, four soldiers of the Lowell-based Sixth Massachusetts Volunteer Infantry were shot and killed in Baltimore by a pro-Confederate mob, making them the first soldier to die by hostile fire in the American Civil War. In a blog post last week, I told the story of the Baltimore Riot. This week, we look at how General Benjamin Butler with the aid of the Sixth Regiment and other soldiers from Massachusetts, acted decisively and heroically in the opening month of the Civil War. In doing so, they safeguarded Washington, D.C. until the rest of the northern states mobilized their armed forces.

The Sixth Regiment was the first organized and fully armed military unit to pass through Baltimore in response to President Lincoln’s call for 75,000 volunteer troops to put down the rebellion. Because Baltimore was essentially a southern city, dominated by those sympathetic to the Confederates, the passage of Northern troops through town, especially those from that hotbed of abolitionism Massachusetts, was an outrage.

The April 19, 1861 riot killed twelve Baltimore residents along with the four soldiers from Massachusetts and inflamed the population. Already sympathetic to the southern cause, the mayor and police chief of Baltimore ordered the railroad bridges coming into the city from the north to be burned, ostensibly to prevent further bloodshed in the city that they predicted would come with the arrival of more northern troops. While destroying the bridges did prevent any additional fighting in Baltimore, it also cut the strategic rail line that connected Washington, D.C. with the Atlantic and New England states.

The burning of the Baltimore bridges created a strategic crisis for President Abraham Lincoln. As of the evening of April 19, the only loyal troops in Washington were the men of the Sixth Massachusetts Regiment who had made it through after the Baltimore riot less their 4 dead and 32 wounded comrades.

The previous day, April 18, Confederate militia had captured the US Arsenal at Harper’s Ferry, Virginia. Besides providing the Confederates with thousands of rifles that were stored there, this also blocked the primary rail route into Washington from the northwest. On April 20, Confederate forces seized the Gosport Naval Yard, now known as the Norfolk Naval Shipyard, which at the time was the main base of the United States Navy. Its capture handed the Confederates several ships, countless cannon, and tons of gunpowder and other munitions. Confederate control of Gosport also blocked the entrance to Chesapeake Bay, which was another possible route into Washington.

Surrounded by hostile forces and almost completely cut-off from the north, Abraham Lincoln became despondent, expecting a Confederate move against Washington any day with just the Sixth Massachusetts Regiment available to defend the capitol. But Lincoln underestimated the resourcefulness of Ben Butler.

Butler had accompanied the Eighth Massachusetts Regiment which had left Boston shortly after the Sixth. The Eighth was in Philadelphia when word came of the Baltimore riot and the burning of the bridges. Butler put the Eighth Regiment on a train heading south but went only as far as the town of Perryville on the Susquehanna River. Normally, a large ferry boat would carry the train across to the south side of the river where it would continue down the track to Baltimore. This time, Butler seized the ferry, loaded the Eighth Regiment aboard, and ordered it to sail down Chesapeake Bay to Annapolis, the capital city of Maryland.

The Massachusetts troops arrived just as pro-Southern residents were about to seize the Naval Academy, the USS Constitution (which was docked there) and government buildings in the town. Butler took control and immediately inquired into the state of the railroad that ran from Annapolis to Annapolis Junction (today’s Fort Meade) where the line joined the main Baltimore to Washington track since this route would by-pass Baltimore. Butler found that much of the track had been torn up to prevent its use and the only engine that hadn’t been moved out of town was broken-down in the repair shop. Quizzing his troops, Butler found many who were experienced at railroad construction and immediately put them to work repairing the track. He also found a private from Lynn who worked in the machine shop where the engine had been built. This guy was able to get the engine running and soon the route to Washington was open.

Butler was named the commander of the newly formed Department of Annapolis and ordered to keep this route into Washington open. He did, and by the end of April 10,000 troops had flowed down those tracks into Washington, and the threat to the nation’s capitol had passed, thanks to the resourcefulness of Ben Butler.

2 Responses to Butler Saves the Union