We are all hoping to get through to the other side of this virus crisis. We don’t know what the conditions will be. More than 16 million people have filed for unemployment benefits–the real number of jobless people is much higher. There is much pain and suffering ahead in terms of health and money needs. Contributor Mike McCormick, born out west and raised in Haverhill, Mass., and now an Alaskan, sent us his recollection of the tough job situation in the Merrimack Valley in the mid-1970s. He became an economic migrant, going to the Northwest to find employment. After a few twists and turns, he found his footing in Alaska, where he started out cooking, a skill he had mastered during summers at Hampton Beach, N.H. — PM 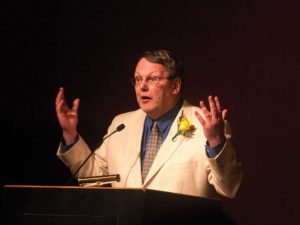 Times were bleak when I graduated with a teaching degree from UMass Amherst in December 1975. Unemployment in Haverhill, my hometown, hit 16 percent that July. The Haverhill/Lawrence Area was selected as the worst place to live in the United States by a  “Places Rated” publication.

I was depressed as I wandered through childhood haunts. Broken glass and trash littered sidewalks and street gutters. When I stopped to run laps at St. James Park,  a place where the fields had always been well kept, the grass reached my shins.

Naturally, I wanted to use my degree. But teaching jobs throughout the United States were scarce. One professor suggested that if I really wanted to teach, I should move to Australia where there was a teacher shortage.

I couldn’t fathom living in Australia. So, I applied to substitute teach in Haverhill’s schools for $30 a day. Living at home, a few days work would cover gas money and help Dad and Mom with a few meals. Plus, it was a way to get my foot in the door for a full-time job.

I had always wanted to go to Alaska. After World War II, Dad located an Alaskan cooking job while visiting Seattle. Since I had been a cook over the past six summers at Hampton Beach, New Hampshire, and most recently at Sawyer’s Restaurant in Plaistow, just over the N.H. border from Haverhill, I thought it might be worthwhile to head west. Dad agreed. He figured that I might get an Alaskan job, or at least a job in Seattle if I headed to the Emerald City. He called his friend Roy Salter, originally from Boxford, Mass., and arranged for me to stay with him and his wife Ruth in their Bremerton home, a one hour-ferry ride from downtown Seattle. Somehow Dad got together money for me to fly there.

In those years before Amazon, Microsoft, Starbucks, and Costco set Seattle’s economy ablaze, Boeing was the only major private employer in town. When I arrived there, the aircraft manufacturer had enacted a hiring freeze. Seattle unemployment shot to almost 9 percent.

For two weeks, I trudged along Seattle streets looking for work. I dropped in to forty different restaurants asking for any possible kitchen job. I searched at the unemployment office each day and searched newspaper help-wanted ads. Few Seattle, and no Alaska, employers were looking for help.

One morning I decided to go to the employment office where day laborers hired out.  I got picked up along with a burly, full-beaded, wine-loving man named Dave to go to the freight yard. There we were ordered to transfer a semi-trailer load of fifty-pound bags of peas from the truck into a boxcar. One of us would wrestle up a bag and half hand, half toss it to the other person who would heave it onto the pile in the box car. Dave was a Red Sox fan. As we shifted a pea bag from one of us to the other then up into the boxcar, Dave would call, “ Burleson to Doyle over to first–double play.”

Dave was nowhere to be seen when I arrived for the third day. Since the boxcar job was over, I needed to pick up different work. A scrap metal company employee picked me to move one junk pile to another. I hated the feel of the metal and the clanking noises the pieces made when I tossed them on a pile. I hated being led around from one pile of junk to another all day. When I collected my $22 check, I silently decided I would not be back.

That night I got an idea. I’d hitchhike to Idaho and visit Adele, a friend from her student-exchange days at UMass. After her exchange, she had returned to the University of Idaho in Moscow.

I said goodbye to the Salters, caught the ferry, walked to I-90 and hitchhiked east.  When I turned up unexpectedly at the two-story house where Adele rented a room, she arranged for me to stay there. The next afternoon, she brought me to the Country Kitchen Restaurant where she waitressed. They needed a dishwasher; I’d finally found a kitchen job.

The previous summer, one of Adele’s housemates had been a chambermaid at Mount McKinley Village in Alaska.  She offered me an application to work there. I filled it out and mailed it immediately.

The next day I heard a recording of Bonnie Raitt’s  “Home” through the floor from the apartment below. It got me thinking. Moscow was a nice enough town, but it would never be home.

With that realization, I decided to retreat back to Seattle. I packed up my belongings, stepped out the door, and walked toward the edge of town. I stuck out my thumb and had a ride within minutes.

I reached the Seattle ferry terminal in time to catch the last Bremerton boat.

I reached the Salters’ home about 2:30 am.  Since it was so late, I slipped into their yard and spread my sleeping bag on the grass.

I slept soundly. When I woke to the morning light, I discovered that I was covered with snow. I got up, shook the snow off my bag, stuffed it in its sack, picked up my pack, and headed inside.

When I resumed job hunting, I discovered a new Cajun restaurant on the Seattle waterfront. The head chef hired me to wash dishes at $3.00 an hour with promises to train me as a cook. The next morning in Bremerton, I packed my things, thanked the Salters, and told them I would be getting a room at the YWCA.

I called Dad and Mom. Things were not well with them. Like so many people in Haverhill, they were struggling to make ends meet. I did the numbers and realized that even if I could get a cooking job, there would be no way I could help them.

As I was getting ready to leave the YWCA for my third day of work, I felt a compulsion to head back to Haverhill. I packed my things, handed in my key at the front desk, and headed to I-90.

A couple of car rides and two long-distance truckers later, I was standing in a snowstorm at the Wisconsin border. A university counselor from Arizona picked me up in and treated me to a room, breakfast, and gave me forty dollars. Two more long-distance truck rides later and I was at the Baltimore train station. I bought a ticket all the way to Boston. I used my last dollars to for a bus to Haverhill. By the time I greeted my shocked parents with my unexpected arrival, I’d made it from Seattle to Haverhill in four-and-a-half days.

I checked the School District again to see about substitute teaching. The clerk said someone would get back to me.

I called Sawyer’s Restaurant where I had cooked the previous summer. They had no cooking slots open, but I could bus tables for $2.25 an hour. In desperation, I took the job.

Bussing tables is the lowest job in a restaurant. It’s often a first job for fourteen- year-olds in high school.  I couldn’t imagine a more embarrassing job for a college graduate.

One night I was mortified when I walked with my dish bucket into the dining room. I spotted my high school girlfriend’s best friend Randi dining with her mother. My stomached cinched with shame and failure. I couldn’t let them see me. I turned back into the kitchen, propped the tub on the edge of the dishwashing sink, slipped into the bathroom and locked the door.

As I sat, I could hear waitresses wondering where I’d disappeared. They needed tables cleared. Finally, a manager offered to help.

After twenty minutes passed, I emerged, grabbed the dish tub, and cautiously stepped into the dining room. Randi and her Mom were just leaving.

Dad called up to me in my room a few days later to tell me I had a letter from Alaska. I rushed down the stairs and ripped open the envelope.  I had a cooking job!

The day before I headed north, the School District called to inform me I could interview for a substitute job. They were too late.

I loved cooking in Alaska. I loved Alaska. In the fall when the tourist season ended and the restaurant closed for the winter, I headed to Anchorage where I found a teaching job. I’ve been an Alaskan ever since.

The Merrimack Valley recovered. Dad found work again in a shoe factory where Mom also worked. My friends who graduated from college during that mid-70’s recession and stayed there have mostly done well.

Although the immediate economic picture in the Merrimack Valley is not rosy, the region’s people have come through hard times before.

They will this time too.

One Response to Mike McCormick: Hard Times in the 1970s