This past Sunday I revisited notes from a writing course I attended in Ireland three years ago. At the time America was a few months into a new presidency, and with much talk at home of building a wall, the warm welcome I received abroad was reassuring. Over the past three years, much has changed in the world; but what remains a constant, particularly in this time of crisis and self-isolation, is the reminder that we’re never alone.—C.O.

Notes from Carlow: A Week of Writing

I RECENTLY COMPLETED A SIX-DAY, in-residence writing course with The Story House Ireland. My introduction came by way of author Michael Harding. In early January I noticed an online interview with Harding on WLR, a Waterford radio station. Walking the dog along a wooded path, an ocean away in Massachusetts, I listened to Harding talk about life, writing, Buddhism, and his time as a priest. “Faith is not a certitude. Faith is an act of hopefulness that maybe we’re not alone.” I enjoy Harding, and while I thought about his writings another interview followed.

It was two women. They were describing an upcoming course in Carlow. The students, limited to twelve, would be tutored on writing, take turns cooking, share passages from favorite authors and eventually read from their own work. The women were Margaret O’Brien and Nollaig Brennan, founders of The Story House Ireland, and in just a matter of weeks I would come to meet them both.

Modeled after the Arvon Foundation in England, Story House is based on the belief that the act of “writing is transformative.” It offers courses, resources and support for developing writers. I decided to send an email, more curious than serious, and discovered that the course was “Writing for Young Adults.” That was disappointing since I was writing a memoir.

For the past three years I’ve been working on a book. It took me a long time to feel even partially comfortable referring to my 100,000 plus word count as a book, but eventually I concluded that whether good or bad, that’s the reality of what I’ve been doing. It was originally a nonfiction piece about my grandmother and the Titanic, but an editor in California got me thinking about what I was really writing. When I began working on a second draft, it became a memoir.

Although the underlying subject matter was the same, the rewrite was intended as a modern-day Jeremiah, a literary device of 17th century American Puritans used to describe a personal journey, usually spiritual in nature. In my case, it was moving from an exceedingly rational view of the world to one more excepting of unexplained and magical aspects of life.

Given my particular project, Margaret and Nollaig sent me a link to Arvon where there were many course offerings more related to my own work. I came very close to not attending Story House, and even sent an email to that effect, but sometimes you have the good sense to follow your instincts and do what feels right. I secured the second to the last spot. As it turned out, the daily writing classes were as valuable to me as to those writing for young adults, for “good writing is good writing” as we repeatedly learned during the week.

I arrived in Ireland a few days early to visit with family. I was last “home,” as the Irish say, in November for a Month’s Mind Mass, a sad time. But the skid of tires on Shannon’s tarmac remained a joyful sound, and it marked the start of days that quickly passed: dinner with Marie at Moran’s Oyster Cottage; a trip to Teresa’s; lunch with Henry, Mary and Loretto in Gurteen; a drive by the empty stone cottage where once the Toolans lived; a night at the Landmark overlooking the Shannon; catching up with Padraig, Lorraine, Eta, Breda and the girls; a pint at Pat Nestor’s; Chinese take-out with Ann; listening to A South Wind Blows while Puss, pregnant with kittens, lay by the cookstove, and several times throughout those days we passed the graveyard where Annie now rests beneath a most comforting thought: In Iothliann Dé Go Dtugtar Sinn (“We Are Gathered in the Haggard of the Lord”), because maybe we are not alone.

Monday arrived. As I carried my bags out to the car that morning, I was surprised to be a bit nervous. Marie tossed a hot water bottle and an electric blanket into the boot, though as it turned out neither were ever needed. We took the N80 towards Tullamore and eventually on to Carlow. Along the way we passed through Stradbally, a Tidy Town winner, and in the distance admired the Comeragh mountains. Once in Carlow, we made a quick stop at the Brownshill Dolmen. It dates back to 4000 BC and weighs an estimated 100 tons, the largest in Europe. Its size can’t be appreciated until you stand before its massive capstone, resting these past centuries on two portal stones as it opens to the Otherworld. The Ancients also hoped that we are not alone.

The course was held at Lisvanagh House, a 19th century estate in Rathvilly. After a communal dinner, we gathered in the library for our first exercise. We were to state our name and say something about it. Waiting my turn, I thought of my grandmother and this long journey I’ve been on working to tell our story.

“My name is Christine O’Connor. I am named for my grandmother,” I began. I told of her coming to America and that when she first arrived in the States, American relatives convinced her that her name (Delia Toolan) was too Irish sounding. “Over the years she would say to me: ‘and to think I listened to them and changed my name.’ The thing is because of my writing, I now think of her only as Delia.”

What I didn’t share, regrettably, was the meaning of her name: for Delia was the goddess of fire and poetry and Toolan, translated from the Irish, means a mighty people. However strange and unlikely, I felt as if Delia, though gone for many years, with me that night in the library. This wasn’t shared either.

The week went well: a communal pot of black coffee each morning in the barn; breakfast by the wood stove; a solitary walk to the main house for the start of classes; the “chimes of doom” ending each writing exercise; at lunch fresh breads and local cheese; time with tutors E.R. (Elizabeth) Murray and Sheena Wilkinson; afternoon walks with Ger; a steaming hot shower before dinner; the most delicious of meals; evenings gathered in the library for readings; and, if we were lucky, an amazing display of stars as we made our way to our rooms in constant chatter and roaming torch lights.

The morning classes covered the mechanics of writing: dialogue, world-building, knowing your characters, editing. On two afternoons there was a private session with a tutor, each an important part of the week. The evening readings varied: selections from our tutors; a talk, at times hilarious, about the publishing industry from mid-week guest Patricia Forde. Thursday night, students read from their favorite authors. I brought an excerpt from Thoreau’s The Maine Woods, and a scene from Dermot Healey’s A Bend for Home, but read Elizabeth Bishop’s In The Waiting Room: “What similarities/ boots, hands, the family voice/ . . . held us all together/ or made us all just one?”

Friday afternoon, I had cooking duty with Megan and Derek. After dinner, all participants would read something of their own. Taking a break from our aubergine curry dish, Megan and I read our selections to each other. I felt ready. The piece was the appropriate length, it had some dialogue and it gave listeners a sense of what I have been writing. Returning to the kitchen Megan said: “You know, all afternoon I’ve been thinking of my grandmother, and I think it’s this kitchen. It reminds me of hers, even this table with the knife drawer.” 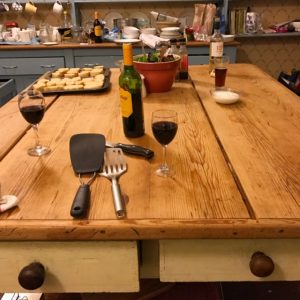 I stopped stirring the meat sauce. You should read the Prologue, I immediately thought. It’s about Delia. It takes place in her kitchen. She too had a table with a knife drawer. If it wasn’t for her, you wouldn’t even be here this week. But my thoughts then turned to the practical. It’s way too short, there’s no dialogue, plus I already practiced my reading. This internal debate continued throughout meal preparation, dinner, and while waiting my turn in the library.

“Christine, Derek, who wants to go next,” asked Margaret. Derek was pouring a Smithwick’s, so I opened my Mac, located the prologue and began: “My grandmother use to wonder about heaven. She wondered if there was such a place. Often she wondered aloud. It was one of the many things in life she repeated, like the lyrics to the Red River Valley or the opening lines of a favorite poem: ‘October gave a party/ The leaves by hundreds came.”

The piece goes on to describe her kitchen, recalls the afternoons I spent at the house, and ends with Delia singing the refrain to the Red River Valley by the stove. It was short and unrehearsed, but in the same way I felt that attending Story House was right for me, reading that piece felt right too.

The evening continued with chat, laughs, and an occasional Carly Simon song. Over glasses of red wine and opened books, emails were exchanged and pictures of dogs back home were shared. Sitting by the fire, Sheena announced to the group that she had something for me, and in a moment she returned with her guitar. After flipping through a few pages of her notebook, she began to play a certain nineteenth century folk song, the Red River Valley. Others, including myself, sang the refrain. It was a meaningful moment, impossible to replicate, and it filled me with what Bishop termed, “the sweet sensation of joy.”

Unknown to Sheena, or anyone there, I begin and end the book with the lyrics to that song, and return to it in various parts of the book. It’s the song everyone in our family associates with Delia. It’s about leaving your home, the place and people you love, and it’s also about remembering those gone. In many ways this American “cowboy” song is descriptive of Delia’s south Sligo, when in autumn, the surrounding hills, valleys and roadside brush all turn beautiful shades of a reddish, rust color. Whether “rua” in Irish or “roe” in English, many of the place names around Gurteen, from Meelroe or Mullaghroe, reflect this colorful transformation.

There was much I learned that week in Carlow: walking is as important as writing; reading too; it’s important to know your tribe, but sometimes you have to create your own tribe; creativity can come from many places, including in the kitchen; write every day; but, more than all that, Margaret is right: “the act of writing is transformative.” It can take us to places we never intended, it can make us do things we otherwise wouldn’t and it can even have us come to believe in things we normally wouldn’t. That night with Sheena and others in song, I felt a certainty that we are not alone. 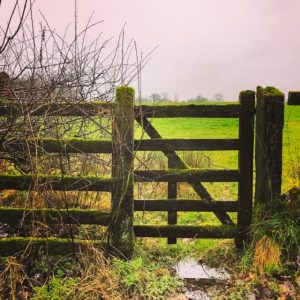 3 Responses to Christine P. O’Connor: A Week of Writing in Ireland