From University Hospital in Waterford, Ireland, Alex Hayes of the staff sent us a poem he wrote in the midst of the virus crisis. We know Alex from the anthology Atlantic Currents: Connecting Cork and Lowell, just published this month. He has several poems in the collection. A graduate of University College Cork with honors in English and Philosophy, he won UCC’s Patricia Coughlan Award for his writing in 2017. We look forward to featuring him in the future on this blog.–PM 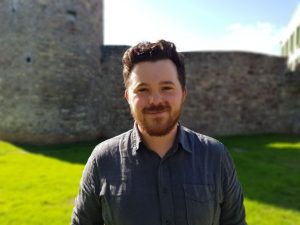 I believe that, in these times, within four walls,

Each of us will face a choice: to quiver,

to amygdala and tribalism,

Or to find that furtive place within us,

where dwells the mystic chords of memory,

binding each of us to the greater whole.

I believe that, in these times, when choice is made,

Each of us will come to know the truth of

who we really are, what we are willing

to sacrifice for others, no matter

I believe that, in these times, like times before,

We will endure, aid, survive, and yet thrive,

That this malady, this new crowned disease,

will not end us, just as black death did not

end us, just as we did not end ourselves

when we learned to split the atom itself.

I believe that, in these times, sheer bravery

will conquer fear, that love for each other,

in great tidal crash, will drown the hatred,

that defines so much of the worst demons

of our nature. The demons that maim the

genitals of little girls and that drive

lost men to split open skulls in the name

I believe that, in these times, not the starlet,

not the footballer, influencer or

the banker will be our heroes, but those,

the warriors on the frontline of the

war against this unseen enemy: the

nurses, doctors, midwives, and the porters,

the cleaners cleaning garbed in PPE,

and the patients themselves who brave terror,

to come in for the sake of their baby,

those who risk their lives are owed that title.

I believe, in these times, above all else

2 Responses to From Ireland, a New Poem By Alex Hayes in the Time of the Virus