In normal times, some of us would be watching the Bruins late in their season, looking forward to the playoffs. This ain’t normal time. So, we have something else. Mike McCormick sent this essay from Alaska. He grew up in the Merrimack River Valley, Haverhill, and soaked up the Boston sports vibe, which has stayed with him. He soaked up all kinds of music in those enormously creative years as well. We look forward to more writing by Mike. — PM 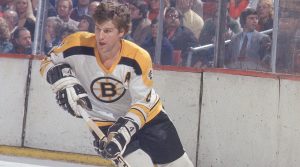 FIFTY YEARS AGO THIS SPRING, in 1970, Merrimack Valley sports fans were enthralled by the Boston Bruins’ march to the team’s first Stanley Cup Championship since 1941.

As any longtime Bruin fan can tell you, the surge towards the crown was ignited when an eighteen- year old rookie named Bobby Orr joined the Bruins in 1966-67. Although the Bruins had a losing season that year, their rookie of the year winner offered a glimmer of hope for a team that had not had a winning record since 1959.  In addition to Orr, in 1967 center Phil Esposito came to the Bruins along with Ken Hodge and Fred Stanfield from the Chicago Blackhawks in arguably the greatest heist in New England sports history. By 1968-69, Orr and Esposito combined for 190 points and transformed the Bruins into a juggernaut with serious Stanley Cup aspirations.

My life was filled to the brim that year. I had gotten hooked on the Bruins by watching grainy black and white broadcasts on Channel 38. The aging Boston Celtics, who I’d followed closely since 1965, were battling towards a title in player-coach Bill Russell’s final year. I’d just completed my season playing junior varsity basketball for Haverhill High School. And I loved rock music as deeply as I loved sports.

The idea of rock festivals was taking hold across the country that spring.

In February, I learned about a series of concerts running over two weekends at Boston Arena under the moniker of The Boston Pop Festival. I used the snow-shoveling money I’d saved from clearing driveways in that historically snowy year for advance tickets.

Once I received my tickets, I had to figure out how to get to Boston from Haverhill. Since I was too young to drive, Trailways buses offered my best option. The challenge was, the last bus departed Boston for Haverhill at 10 p.m.–well before most concerts ended.

Fortunately, I developed a solution. I would ride a bus to Boston (about a one-hour journey) and walk from the bus station (a few blocks from Boston Common) to the concert. Then I would walk back to the bus depot and sit awake in the waiting area until the 8:30 a.m. bus left for Haverhill.

Canned Heat’s headlining set exceeded expectations. Led by rhythm guitarist Alan “Blind Owl” Wilson, the Heat knocked out hits “On the Road Again” and “Going Up Country.” Best of all, the show concluded with an extensive boogie instrumental featuring hot guitar and bass solos. As I headed out of the Arena, I overheard three people talking about Led Zeppelin, a new band that I loved.

I paused and eavesdropped. It seemed that tickets for an upcoming Led Zeppelin concert were going on sale in the morning at the Boston Garden. People were already lining up for ducats outside the Garden.

I was struck by an idea. Instead of sitting all night in a rundown waiting area, I would stand in line for Led Zeppelin tickets.

I navigated the three-plus miles from the Boston Arena, deep in Boston’s Back Bay, to the Boston Garden in the North End. I grew apprehensive as I walked. Were Zeppelin tickets really going on sale? Was I dressed warm enough to keep comfortable all night?

I was relieved to discover dozens of people lining the sidewalk outside the Garden. As I hustled towards the end of the line, something seemed wrong. The people there did not look like Led Zeppelin fans. Although there were a few people who looked college-aged, most people seemed to be at least thirty. Nobody had long hair.

I asked someone if he was in line for Led Zeppelin tickets.

He looked at me as though I was speaking a foreign language.

This is the line for Bruins playoff tickets, “ he answered emphatically.

Luckily temperatures stayed above freezing. I spent the night on my feet, shuffling in place when I got chilled. People passed around sections of the Boston Record American sports page. As could be expected, most talk was about the Bruins.

About an hour after sunrise, the line started moving. I made quick progress from the street, through the lobby to the ticket window. I purchased the maximum four tickets, two each for games three and four of the playoffs’ second round. I bee-lined to the bus station as soon as I pulled away from the ticket window. I was fast asleep in my Haverhill bedroom by noon.

After sweeping the Toronto Maple Leafs in round one, The Bruins lost two heartbreaking overtime contests to the Montreal Canadiens to begin the playoffs’ second round in a hole.

Dad had no interest in hockey or driving me to Boston for game three, but he understood that I had a very desirable opportunity. After I turned down his suggestion to try to sell the tickets (“You could fetch a pretty penny”), he convinced a fellow beer drinker at Lebro’s Café to drive me to the Garden when the Bruins returned for Game Three.

I’d never met the man. I now have no clue what his name was, or what he looked like.  Driving in, he attempted to make conversation. He treated me to a spaghetti dinner at the restaurant across the street from the Garden. That night, the Bruins blew out the Canadiens 5-0. Thirty-eight-year-old Gump Worsley (the last NHL goalie to play without a mask) suffered the shellacking.

Haverhill High’s halls buzzed with Bruins’ talk the next day.

Classmates were highly impressed when I reported I’d been at the game.

“You’re shittin’ me!” was the initial comment more than once.

I reserved my extra ticket to Game Four for Jack, my longtime best friend. Since the game was a matinee, we could catch a bus both ways to Boston.

It was after 11:30 a.m. when we started downtown along Primrose Street to catch the noon bus. Reaching Winter Street next to St. James Church, we checked the time and panicked. We were cutting things thin. We decided to run.

We bolted down Locust Street past Lebro’s Café into the factory district.

I suggested we cut through an alley that emerged near the Chit Chat Lounge, only a few blocks from the bus stop. I gripped the tickets in my hand so they wouldn’t fall out of my pocket as I ran. Halfway through the alley I realized my sneakers were untied.  I called to Jack to hold up. I pulled up next to a pair of aluminum trashcans. I set the tickets on one of the can lids. I reached down and knotted up quickly.

“Let’s go, “ I called the moment I finished.

Sprinting around the corner into Washington Square, we could see the bus idling in front of the Post Office. It was ready to pull out. The driver saw us coming and popped open the door. Breathless, we stepped up into the bus.

“We’re going to the Bruins game, “ I blurted.

The driver smiled and answered, “You are lucky to have tickets.”

Hearing the word tickets, my stomach knotted. I reached into my pants and shirt pockets, looked at Jack and said, “I think I lost the tickets.”

“You what ? No way!  Think McCormick, what did you do with them?”

The driver stared silently. I thought back to our run.

“Jack, I think I left them in the alley.”

I looked at the driver. I knew it was past time for him to leave. I said,

“We accidentally dropped the tickets in the alley. We can run back there in minutes. Could you wait.”

A long moment of silence passed before he responded.

Jack and I flew out of the bus and raced to the alley. As we approached the trash cans, I vaguely remembered setting the tickets on one of the lids. I hoped that someone hadn’t picked them up.

I needn’t have worried. The black-and-gold ducats were exactly where I had set them on the aluminum trash can lid.

The Bruins prevailed in hard fought 3-2 win that afternoon. With the Series tied 2-2, the teams returned to Montreal where the Canadiens took consecutive games to close out the series. With the Bruins vanquished, Montreal dispatched the St Louis Blues for the title.

Things were different the following year. Led by a record breaking 124 points from Orr and 99 from Esposito, the Bruins roared into the playoffs where they climaxed the season by sweeping the Blues for the Cup.  Orr’s “soar through the air”  game winner was captured by one of the most iconic photos in hockey history. 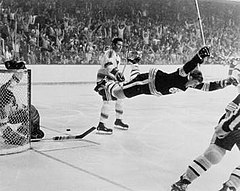 Those Bruins of fifty-odd years ago triggered the construction of hockey rinks and were the catalyst for youth leagues and many scholastic hockey programs that didn’t exist prior to 1970. It could be argued that no other sports team had a bigger impact on the Merrimack Valley.

One Response to Glorious Bruins of 1970: Mike McCormick’s Memory