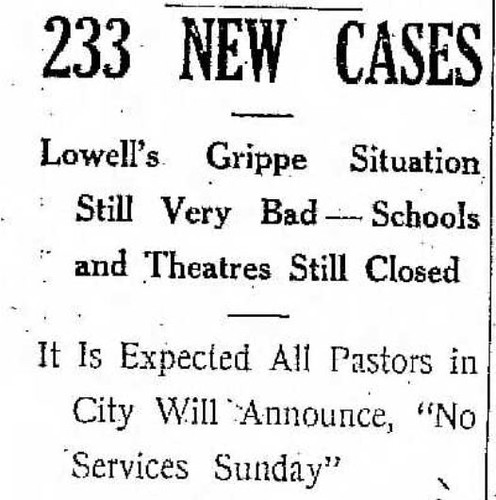 Recent headlines report the spread of the coronavirus around the world which makes it a useful time to recall perhaps the deadliest epidemic to ever strike Lowell. It was influenza but was also known as the Spanish Flu or the grippe. It struck in the fall of 1918, just as World War I was reaching its end on the battlefields of Europe. Here are some headlines from 101 years ago:

September 20, 1918 – Friday – 15 die at Ayer. Soldiers victims of pneumonia developing from cases of influenza. Largest toll of single day, but doctors are confident epidemic is waning. No grippe ban in Lowell. Mayor, Health Board and Public Safety Commission await influenza developments. Mayor Thompson says quarantine must be ordered by state or camp officials. Soldiers stationed at Camp Devens who are not suspected of having symptoms of Spanish influenza will come to Lowell tomorrow and Sunday as usual. No action has been taken by cantonment authorities to prevent soldiers from coming here in their customary large numbers for the weekend. Also, the state board of health has ordered the local board of health to promptly report any new cases of influenza but also urged local boards to “counsel calmness and moderation in the treatment of this outbreak.” The state board also stated that quarantine of households or wage earners should not be adopted unless deemed absolutely necessary.

September 23, 1918 – Spanish Influenza: Eighty cases of influenza reported in this city since Friday. Deaths here at at Camp Devens. Hospitals closed to visitors.

September 24, 1918 – Tuesday – Grippe in Lowell. Number of Spanish Influenza cases in this city to date totals 241. Fear damp weather will tend to spread disease. Schools may close. Murray at rest. The funeral of William F Murray, postmaster and former Congressman was held today in Charlestown. The Mass was celebrated by Stephen G Murray, a brother of the deceased, who is a curate at St. Margaret’s church in Lowell. Postmaster Murray died Saturday of pneumonia, resulting from an attack of influenza.

September 26, 1918 – Thursday – State asks U.S. aid in grippe fight. Local Board of Health orders all schools and theatres closed until Monday. Install gas heaters at City Hall. Owing to the unusually cold weather and the prevalence of influenza, Commissioner Francis Warnock of the public property department made arrangements for the Lowell Gas Light Co to install gas heaters in all the offices at City Hall to be used while the unseasonable weather lasts or until the new boilers in the building are installed and ready for lighting.

September 27, 1918 – Friday – Not much change in grippe epidemic. At total of 80 new cases were reported to the Board of Health by noon today, compared to 101 reported during the same time yesterday. Four more deaths were reported yesterday, making the total since the epidemic began 19. No decision has been made yet on whether to reopen schools and theatres.

October 1, 1918 – Tuesday – Grippe cases: More than 300 new cases of influenza reported at City Hall today. But health authorities believe that crest of epidemic has been reached. The isolation hospital on Varnum Avenue is being prepared to take care of 100 patients if the epidemic continues, and the Chelmsford Street hospital is also prepared to take patients.

October 3, 1918 – Thursday – Lowell grippe situation still very bad. 233 new cases, schools and theatres still closed. It is expected all pastors in city will announce no services this Sunday. Constantineau dead. The many Lowell friends of Leo “Connie” Constantineau, the popular CMAC pitcher will be grieved to learn of his death at Portsmouth, Virginia, where he was serving with the US Navy. He is survived by his parents, Mr. and Mrs. Napoleon Constantineau of 26 Livingston Street and two sisters. The 24-year-old Constantineau was considered the best baseball pitcher this city has produced in years. Last summer he was invited to Chicago by President Commiskey to join the White Sox, but he had already decided to join the Navy and so sacrificed what would have been a great baseball career to serve Uncle Sam.

October 7, 1918 – Monday – More drastic orders by Health Board. The Board of Health this morning ordered that all liquor establishments must close at 5 o’clock every afternoon, like all other businesses in the city. The board also announced that the isolation hospital will be opened tomorrow morning and will be able to care for 125 people. If conditions continue to deteriorate, the board also plans to order all churches to be closed next Sunday and that no gatherings for funerals are permitted. Also ordered closed immediately are all coffee shops and libraries. There was no let-up in the epidemic today with 264 new cases reported by this afternoon. Eight more deaths were recorded making a total of 131.

October 9, 1918 – Wednesday – Lowell Municipal Council votes $15,000 to fight Spanish Influenza epidemic. Money will be used as emergency requires. Federal Health Officer takes charge of local situation. League of Catholic Women and Catholic nuns will cooperate with Red Cross and Lowell Guild. At the direction of Cardinal O’Connell, all teaching sisters of this city have been mobilized to assist in caring for influenza victims. The Cardinal stressed that there would be nothing sectarian about this effort, that everyone would be treated equally. The Knights of Columbus rooms will now be open night and day as a central nourishment station. Donations of bed linen, clothing, children’s garments, and underwear should be sent to the rooms for distribution to patients.

October 11, 1918 – Friday – Lowell sailor victim of pneumonia. Mrs.  Delia McMahon of 19 South Whipple street received news from the Navy Department that her son, John J. McMahon, had died of pneumonia on board the USN hospital ship Mercy, to which he had been transferred from the USS Maine. Close Churches: Board of Health orders all churches closed in this city on Sunday. One ward of Isolation Hospital filled. Made Chairman of Fuel Committee: Albert D. Milliken of the Lowell public safety and fuel committee has been appointed by State Fuel Administrator Storrow to succeed John M. O’Donoghue as chairman of the local fuel committee. One of the best known mill men in Lowell, Mr. Millien is the agent of the Hamilton Manufacturing Co.

October 14, 1918 – Monday –  Grippe checked: Material decrease in number of cases reported in this city today. School teachers help in overcoming Influenza epidemic. Superintendent of Schools Hugh Molloy announced today that he has asked all teachers in Lowell schools to assist in conducting a citywide canvas to determine the extent of the influenza epidemic in the city. Supt. Molloy said the only way to determine the scope of the problem is to do a house-to-house canvas. Molloy told teachers to speak with the children of each house, since they are more likely to speak English than are their parents. He also said it would be permissible for teachers to recruit children 14 years or older to accompany them as translators. Because all will remain outside in the fresh air, it is thought that there will be little exposure to infection, but all will be equipped with masks for added protection.

October 17, 1918 – Thursday – Grippe halted. Only 54 new cases of influenza reported at City Hall today. Indications of general lifting of ban at meeting to be held tomorrow.

October 18, 1918 – Friday – Ban is still on: Board of Health refuses to raise lid on general closing order. No action taken on church closing question. Local theatre men are indignant.

October 22, 1918 – Tuesday – Indications that ban will be continued for several days. Prior to this morning’s meeting of the Board of Health, everything seemed rosy for a general resumption of normal life in the city on Thursday, but a majority of the board voted to continue the ban indefinitely, especially after hearing from Major Durant of the medical reserve of the Massachusetts state guard. The major cautioned against loosening restrictions too soon. He said that had happened in Lawrence, and the disease resumed stronger than ever. The Major also said that the present disease wasn’t influenza at all, but was something far more deadly, and the more that medical authorities came in contact with it, the more terrorizing it became. Teachers complete canvas. Teachers from the 13 grammar school districts in the city completed their canvas, turning in 24,600 cards registering entire households as to their health situation. The cards are now being compiled by Albert D Mack and his staff of assistants at the high school annex. Mr. Mack states that these records will be of great value in the future, for they indicate the number of people living in every house in the city.

October 24, 1918 – Thursday – The annual convention of the Middlesex County teachers association has been postponed because of the epidemic. One of the new 72-inch boilers recently delivered to City Hall by Scannell Boiler Works has already been set in position, and today the second heater was being installed in the basement of the building..

October 28, 1918 – Monday – The ban lifted: Lowell opens up for business after shut down due to epidemic. 26 new cases of Influenza reported.

October 30, 1918 – Wednesday – Influenza keeps children away from school. 3000 missed school this week. Thirteen new cases, and four deaths were reported to the Board of Health today, bringing to 347 deaths from influenza since September 19.

2 Responses to The Epidemic Strikes Lowell: 1918