Remembering those persons who perished on 9/11 today, especially those with local connections. This entry is cross-posted from my blog at paulmarion.com

Posting this on 9/11/2019 in memory of John Ogonowski of Dracut, Mass., where I grew up, and the other persons affiliated with the University of Massachusetts-Lowell who perished, as well as all who died on September 11, 2001, in New York City, Somerset County in Pennsylvania, and Washington, D.C., plus the first responders, military members, and civilians who lost their lives in the following years. So much grief, so much lost. Here’s a link for more about the 9/11 Memorial at the university, including the names of the seven women and men on the memorial, which was designed by university art students. Photos courtesy of UMass Lowell, from the 2011 re-dedication of the UMass Lowell 9/11 Memorial.–Paul Marion 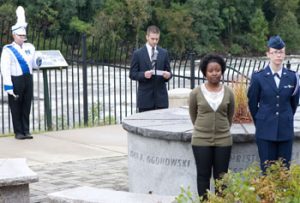 On a rise on the southern bank just below the rocky grill of the riverbed, students at his college carved into stone his name and those of six others to remember John, who grew up to be a pilot and a farmer, who shared his land with Asian refugees who had resettled in the inner precincts of Lowell and who wanted to grow vegetables as they did in Cambodia, Vietnam, and Laos, places from which John had flown home hurt soldiers in the closing years of the war in Southeast Asia,

John the preservationist, who protected open space in his town whose English name is Dracut, from the 1600s, called Agumtoocooke for ages by native people for its vast forest, John, who on September 11, 2001, lifted his passengers into a “severe clear” sky, nothing but blue on the route west, John, who guided American Airlines Flight 11 out of Boston’s Logan Airport, where so many of us have flown away with faith in the promise of technology, management, and civilized behavior,

on that day from which we have not fully recovered the bounce that had always made people elsewhere admire our sure belief that Americans could figure out a problem and invent the next dazzle, a day that moved John’s neighbors and even strangers who had never heard of him to drive slowly up the winding hill road that leads to his farm, where they heaped flowers, hand-made signs, candles, and sympathy cards in front of the wide white gate leading to the farm, piled high the cut flowers, placed in silence,

and past the white gate up the driveway a giant crane held an American flag as big as the flag that covers the left field wall at Fenway Park on opening day, and past the crane and flag was the farmhouse of John’s family, his wife and daughters, who needed him to come back so he would sit next to them at the table in the house one more time. 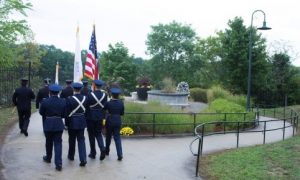