If You See Something, Say Something

It’s Memorial Day weekend. My father, Marcel Marion (1919-1982), born in Lowell, fought the Nazis on the ground in Germany with the US Army in the brutal winter of 1945, the final months of the war in Europe. He knew a fascist when he saw one. He and 16 million other Americans in uniform stood up to the dictator cult fanatics in Europe and Japan. Many Americans died.

I don’t like the dictator whiff around Washington, D.C., lately. The American voters put the Democrats in charge of the U.S. House of Representatives. By ignoring the House, the current executive at the White House is rejecting the decision of the majority in this case. Ignoring the will of the people. The White House is not immune from oversight or authorized to ignore the actions of the largest of the two parts of the Congress. We have a system of shared powers of governance. The White House doesn’t have a monopoly on authority. That would be authoritarian. That would be like a dictator. We’re not supposed to operate that way. My father fought to stop that.

This highlighted excerpt from Benjamin Carter Hett’s “The Death of Democracy: Hitler’s Rise to Power and the Downfall of the Weimar Republic” is going around Facebook today. I picked up the post via writer Carolyn Forche’ who shared it from writer Mikhail Iossel, a Russian-born Montrealer who teaches at Concordia University and studied creative writing at the University of New Hampshire. Iossel has 10,000 friends on Facebook.

If you see something, say something. That’s good advice. And the next step is to do something. 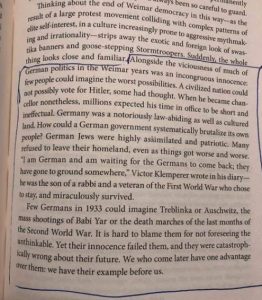