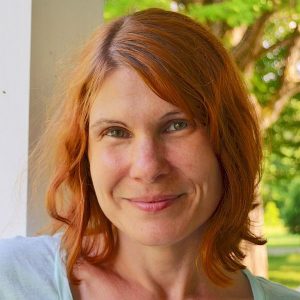 I met Sarah Sousa a few years ago at the Massachusetts Poetry Festival in Salem, Mass. She was there with friends from Perugia Press, an independent publishing company in Florence, Mass. Perugia publishes one title a year, a first or second book by a woman whose manuscript has won the press’s annual prize contest. I had heard she had grown up in Dracut, as I had some years before, and wanted to meet her. She has an extraordinary story, one that should encourage any young person who is inclined to creative activities. Sarah talks about a writer listening “deep inside yourself for guidance” and following a creative path that fits with your interests, ambition, and vision. She already has a remarkable body of work and is moving forward with great momentum. She will return to Dracut in the fall in a Dracut Arts program.

Sarah is the author of the poetry collections See the Wolf (2018): Split the Crow (2015) and Church of Needles (2014) She also edited and transcribed The Diary of Esther Small, 1886 (2014), which won the New England Book Festival Award for Regional Literature. Her poems have appeared in the Massachusetts Review, Fourteen Hills, the Southern Poetry Review, Verse Daily and Tupelo Quarterly, among others. Her honors include a Dorothy Sargent Rosenberg Fellowship, the Anne Halley Prize, and a 2016 Massachusetts Cultural Council Fellowship (the top state award for writers). She has an MFA in creative writing from Bennington College.

For this blog’s series of updates on writers with links to the Lowell area and region, Sarah talked about her background:

“I was born in Lowell and grew up in Dracut in the 1980s, graduating from Dracut High School in 1990. That was back when each part of town had its own elementary school. I went to Greenmont Avenue School in Dracut Center, where my mom and dad had also gone. Back then, everyone converged at Englesby Junior High for 7th and 8th grades. At Dracut High, I took theater for a couple years and acted in a few plays, but I was generally a shy, average student. In fact, I was encouraged by the principal at the time to essentially ‘shoot low’ (not his words but the gist of the conversation) when applying to college as my grades weren’t that great.

“There really isn’t a place for a budding poet in the public-school curriculum. If you like to write poetry and stories, teachers expect you to be an A-student in grammar and literature classes, however, dissecting a paragraph and studying a story for themes and symbolism aren’t the same as playing with words or quietly sitting with a poem to see how it speaks to you. I wish schools would make space for the literary arts in the same way they do the visual and performing arts. I wasn’t drawn to the art room in high school, though I’ve since found that creative part of my personality, and I wasn’t a natural performer. A shy, average student who likes to express herself through language and read for pleasure can fall between the cracks at school. It would be great if schools had literary arts rooms with magnetic poetry, texts to cut up and repurpose or black-out for erasure poetry, quiet corners with shelves of books to read, lots of notebooks, collaborative areas and some basic desktop publishing.”

She stayed local to start college, going to Middlesex Community College when it was still in the Boott Cotton Mills in Lowell.

“Every day I walked past the glassed-in room with clacking looms where tours were given and thought about my French Canadian and Portuguese relatives who worked there in the late 1800s and into the 20th century. I took my first creative writing class at Middlesex and decided I wanted to be a writer. I transferred to Bradford College in Haverhill and majored in Creative Writing, taking both fiction and poetry classes, a lot of focused literature classes like Women’s lit and a class exclusively studying Kafka and Borges

“Bradford College, which closed about 15 years ago, was an amazing little arts college. There was dance, photography, sculpture, theater, painting, writing, every branch of the creative arts, and the professors were practitioners. Bradford was my first real exposure to a creative community, to a community of creative thinkers who were unabashedly unique, bordering on eccentric. I loved it. It was at Bradford that I realized I wasn’t going to college just to step into a job title/role at the end. I had found myself at a college that would allow me to discover who I was and who I wanted to become, to at least scratch the surface.

“I entered college more inhibited, immature, and less worldly by far than my peers. I was the first in my working-class family to go to college. Vacation meant camping at the White Mountains, I had never been out of New England, never mind the country, I had never flown on a plane. My parents were both encouraging, my mother put herself in debt to see me through college, but neither had been to college so they couldn’t advise me on what to expect or how to succeed. Also, neither were artists. The first time I had to go home and revise a poem for a class I wept because I didn’t even know where to begin. I had no idea what I was doing. The thing with artists and creatives is that we’re all artsy and creative in our own ways. To be an artist means being different, following your own solitary creative path, listening deep inside yourself for guidance. A writer spends some of her most fulfilling, as well as most challenging, time in life completely alone. None of these skills are taught in our culture or even respected. And unlike performers, a lot of writers are quiet and introverted, people who don’t really want to stand out as ‘different’ or stand up to be looked at and listened to. I feel really lucky that I wound up in environments of higher education that nurtured the latent poet in me and allowed me to take my time.” 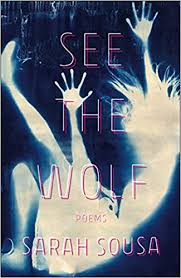 Sarah’s third collection See the Wolf from CavanKerry Press came out last April, so she was busy with promotional readings and events in 2018. She lives in a small, rural town in the foothills of the Berkshires not too far from the hubs of Amherst and Northampton, where reading opportunities for poets abound. Sarah will be back in Dracut in September to give a lecture and poetry reading entitled “’All beat out and tired’: Abuse, Self-Disclosure, and Taboo in 19th Century Women’s Diaries.” Her focus will be the 1886 diary of Esther Small, an abused Maine farmwife, which she found at an antique store in 2008 and subsequently published in its entirety along with genealogical research into Esther’s family and her own critical writing around 19th century women’s diaries.

What’s coming up in 2019? “I probably won’t have as many readings and lectures scheduled in the coming year, but I’ll be beginning and finishing some projects as well as seeing at least one new publication into the world. My chapbook titled ‘Yell’ just won the C&R Press Summer Tidepool Chapbook Competition and will be published in summer 2019. ‘Yell’, at about 30 pages, is an erasure of the long short-story ‘The Yellow Wallpaper’, written in the late 1800s by Charlotte Perkins Gilman.

“In typical erasure, a poet blacks-out any word on a page that she doesn’t want. The remaining words, usually in the order they appear in the text, are her poem. For my project, any word on a page was fair game. I didn’t black-out words in the order they appeared, I just used the language on any given page as my poem’s vocabulary; never all the words, but sometimes more than others. Each page yielded one poem, sometimes two if the language was really provocative on that page. The Yellow Wallpaper is about an oppressed housewife, a would-be writer, who is prescribed rest and idleness for a nervous mind. The complete lack of stimulation and inactivity slowly drive her mad. The poems are ultimately informed by the story, but a kind of alternate reality of the story where the woman discovers her complex and true nature through her delve into madness. In the original, the main character goes completely mad and ends up crawling on all fours. In my version, a kind of classic ‘hero’s journey,’ she goes to the darkest place and resurfaces scarred but liberated.”

Sarah is also finishing a fourth book-length poetry manuscript, which will go to CavanKerry for consideration this winter, and has literary and personal essays in progress. I’m fascinated by her recent project, a food history blog in which she writes about testing historical recipes. It’s called “Emancipation Pie.” 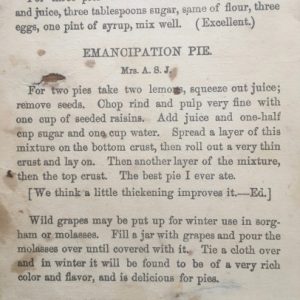 She explained: “I collect ephemera: diaries, photos, scrapbooks, and own several recipe scrapbooks from the late 1800s to the 1920s. It was common for women, and sometimes girls, to snip recipes from cookbooks and newspaper columns, as well as handwrite recipes from neighbors and relatives and paste them into scrapbooks. These scrapbooks were usually repurposed state, town or agricultural reports, so there’s often an interesting hide and seek between the original text and the pasted-in recipes. Alongside recipes, these women included household tips and herbal remedies for common ailments; I have one for diphtheria. I focus on baked goods: cookies, pies, cakes, breads (quick and yeast) and post photos as well as process. Many of the old recipes aren’t detailed like contemporary ones. I’m also cooking from vintage and antique cookbooks. The name of the blog is an actual lemon pie recipe I found in one of my scrapbooks. It has three pie crusts, one in the center of the pie, and includes raisins. I’ve yet to make this pie. It’s one of those recipes with scant information so I’ll have to devise my own methods. I’m also posting photos from my antique photo collection and sometimes blog about one scrapbook or cookbook in particular without an accompanying recipe.”

To learn more about Sarah and her writing, visit her website at www.sarahasousa.com and her fascinating food blog, a recent venture, at www.emancipationpie.com