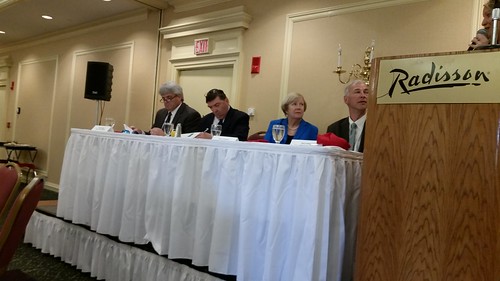 At the close of the program, Moderator Pat Cook of Middlesex Community College joked that the big issues for Greater Lowell communities seemed to be “bones and bones” by which he meant that several town managers had identified dog parks and marijuana retail outlets as sources of community controversy. While both of those are undoubtedly important, an equally prominent theme throughout the morning was housing, especially rental housing.

For years we’ve heard about the “new urbanism” which states that young people are increasingly drawn to cities because of the interesting people and things that can be found there. These same young people are less likely to prioritize their employment above all else. They value a better balance of “live, work and play.” Because businesses tend to go where the workers are, more and more employers are heading to cities too.

But if the speakers at the municipal breakfast are any indication, suburbia is competing with cities by providing its own “live, work and play” balance. That’s a phrase spoken several times by town managers on Tuesday morning.

In a number of Greater Lowell communities, new complexes with hundreds of apartments each are springing up along major roads and highways, not far from major employers. Those same employers emphasize to town officials the importance of providing amenities that attract workers to the community. Good schools have always been a given. Now, things like walkable town centers, recreation trails and dog parks are what defines a community as a desirable place to live. 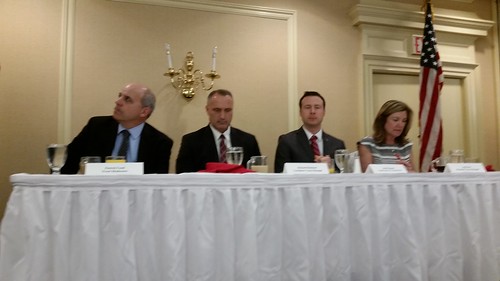 This evolution of suburban housing was a consistent them from the town managers. However, here are some unique items worth noting:

Chelmsford – The next big development zone will be the junction of Route 3 and Route 40. This is the last undeveloped interchange with Route 3 and the town plans to alter its zoning to allow for more housing and services.

Chelmsford – This fall, the state’s Division of Capital Asset Management will begin the bid process for the 30 acre former UMass Lowell West Campus. They envision a senior housing/assisted living complex being constructed here.

Billerica – The partisan deadlock in Congress has frozen Federal infrastructure spending. The negative effects of this – especially the absence of repairs to highways, bridges and interchanges – is being painfully felt at the local level.

Dracut – Without a highway passing through town, Dracut is at a developmental disadvantage relative to the other communities. Still, Dracut excels at doing more with less and has adopted the motto, “Dracut is open for business.” The town is committed to adding amenities desired by newer residents.

Tewksbury – Engaged in a community visioning process. The thing desired by a majority of residents? More and better sidewalks. So the town has developed a master plan for sidewalks and has also adopted the Complete Streets program.

Tyngsborough – Thanks to a Mass Works grant, the Tyngsborough town center, which is opposite the Tyngsborough Bridge, has been revived and better defined. Also, the shopping plaza just south of the NH line (the one with the AMC Theater) just sold and the new owner has plans to make it more walkable and more attractive.

Westford – Besides a dog park, Westford residents, particularly its seniors, want a place to play pickle ball. The town continues to grow rapidly with many new housing units, new and expanded roads, and some new municipal facilities. The asphalt plant that was opposed by many residents is under construction and is due to open next spring.

Lowell – Eileen Donoghue was the rookie of this group, having held office for just a month, but she exhibited a strong grasp of the issues facing Lowell. She spoke of the need to alter the state school funding formula (something echoed by several of her colleagues – school funding is not just an urban issue). Donoghue was most enthused about the soon-to-be-realized potential of the Hamilton Canal District. She said the Lowell Judicial Center is ahead of schedule – it’s now expected to open in August 2019 – and it is also under budget. She said that the Judicial Center will draw people from all over the region and it will have regional economic benefits.

Thanks to the Greater Lowell Chamber of Commerce for hosting this important forum. It’s a nice complement to the annual Legislative Forum that the Chamber holds earlier in the year.

Mimi Parseghian has become a key contributor to this website with her Monday morning Lowell City Council previews which dissect that agenda and all the reports that accompany it in anticipation of the Tuesday night council meeting. Mimi has now added a new recurring post, Lowell Round-Up, which she hopes to post each Friday (although I didn’t get the inaugural version online until last evening). Mimi hopes to share her observations on the week in Lowell politics. If you haven’t read it already, please check out this week’s Lowell Round-up.

One of the things Mimi mentioned in her post was the expected presence on this November’s Massachusetts state election ballot of a question that would repeal the 2016 law that prohibited discrimination based on gender identity. (The Lowell City Council and many residents addressed this issue at a memorable city council meeting back on May 17, 2016).

This referendum would be just one of up to seven questions that might appear on our November ballot. Here are the others (thanks to Ballotpedia):

Income Tax for Education and Transportation Amendment. This would create a 4 percent tax on incomes that exceed $1 million with the additional revenue being dedicated to education and transportation. Known as “the millionaire’s tax,” the Constitutionality of this question has been challenged and is now pending before the Supreme Judicial Court. If the SJC finds this to be an appropriate matter for citizen referendum, then this will appear on the ballot.

The following measures all must obtain more than 10,000 signatures prior to July 2, 2018 to appear on the November ballot. So if you see people with clipboards and nomination-like petitions, they are collecting signatures for one or more of these questions:

Advisory Commission for Amending US Constitution about Political Spending and Corporate Personhood. This question would create a citizens commission to advocate for changes to the US Constitution regarding political spending and corporate personhood (i.e, overturn the “Citizens United” US Supreme Court decision).

Nurse-Patient Assignment Limits Initiative. This would set limits on the number of patients a nurse could be assigned to. 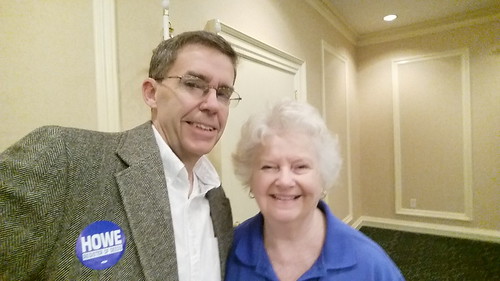 For the first time in several decades, there is a new Chair of Greater Lowell Area Democrats. At this morning’s meeting held at the Radisson Hotel in Chelmsford, longtime chair (and blogging colleague) Marie Sweeney “retired” from that post after leading the group through constant election cycles. The new chair is Christopher Jenkins.

Marie’s leadership has been amazing, not only for its duration but because of her management of a complex group of people with competing interests. GLAD meetings have long been a “must-attend” event for Democratic candidates from state representative to governor and US Senator.  Things like that don’t just happen: a lot of work, effort and deliberation go into these events and Marie has provided them all with grace and good judgment.

The goal of GLAD is to sponsor forums, debates, caucuses, regional meetings and hearings to further the Democratic Party’s agenda in its member communities which are Bedford, Billerica, Carlisle, Chelmsford, Dracut, Groton, Lowell, Pepperell, Tewksbury, Tyngsboro and Westford. And Erika Johnson, the chair of the Wilmington Democratic Town Committee, was present at yesterday’s GLAD meeting to seek membership for the Wilmington Dems, a petition I believe will be happily granted at the next GLAD meeting.

The Lowell Cemetery will hold its annual Memorial Day Remembrance today at noon with a parade from the Knapp Avenue Gate to the Grand Army of the Republic Lot within the cemetery. Military, veterans groups and public officials will participate. The public is invited to attend. After a brief patriotic and speaking program, a US Army helicopter is scheduled to land within the cemetery and remain on the ground for public inspection. There will also be a number of antique military vehicles on display.

Please support my reelection as Middlesex North Register of Deeds by “liking” my Facebook page and by donating to my campaign.

Thanks for your help!