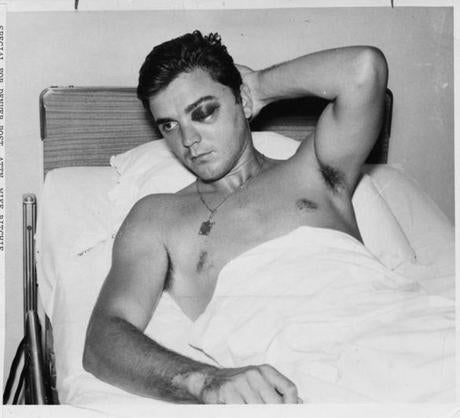 Today’s Globe has a great story about August 18, 1967, the night the Red Sox star right fielder and Massachusetts-native Tony Conigliaro was hit by a pitch, a fastball, in the face and suffered a devastating injury. I still have clear memories of that night and even wrote about it here a few years ago. Here’s my Tony C story from August 18, 2013:

Soon one of the announcers gave “an update on Tony Conigliaro’s condition.” He had been hit in the face with a fastball and had been carried off the field on a stretcher. In 1967 there was no internet, no Twitter, no YouTube, no SportsCenter. It never even occurred to me to get up to see a replay. I relied on the words of the radio announcers and a story and photos in the next morning’s Globe (speaking of which, Bob Ryan has an excellent story about Tony C in today’s paper which includes the above photo). 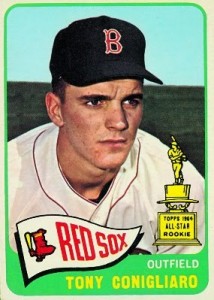 Co-blogger Paul Marion was also a Red Sox fan back in 1967. He has also written about Tony C. Here’s Paul’s post:

If a 19-year-old from Swampscott and St. Mary’s High in Lynn could make the Red Sox, then a kid in Dracut could dream. I was ten when Tony Conigliaro homered on his first swing at Fenway Park in 1964. It was as if one of the Beatles had put on a Boston uniform. I had discovered baseball four years before. My father taught me how to catch and hit in our back yard. My older brother David took up where my dad left off. He let me tag along for games at Gendreau’s Field near our house, where I took a pitch in the head because I didn’t know enough to duck. In those days we’d wrap a ball in black electrical tape to keep the string from unraveling after the cover had let go under the beating of a thousand clouts. My brother had Ted Williams and the early Yaz. My half-generation had Tony C and Triple-Crown Yaz. When my chums and I played Home Run Derby, someone would always say, “I’m Tony C.” He won the American League home run title in 1965, being the youngest champ ever. “Conig” even cut a rock ‘n’ roll record. Soon he was hanging out with Joe Namath and dating nightclub singers.

A few years back, I paid $8.00 for an old Conig card at a baseball memorabilia show. The card is a Topps, 1965. Along the way I lost the one I’d pulled out of a ten-cent pack at the Hovey Square Variety. My old Red Sox had gone the way of Beatles cards of the same period, all those holy pictures tossed out in a fit of adolescence. There comes a moment when it’s shameful to have heroes. The card show guy said Tony C sold well across the country. It’s my favorite Conigliaro card—he’s in three-quarter profile in his crisp white home uniform, and looks as if he’s staring a hole in a batter from his post in right field. There’s a small gold trophy in the right corner for being named a Topps 1964 All-Star Rookie.

One summer in the mid-Sixties, I bought a Conigliaro-autograph model bat at Stuart’s department store in Lowell. My father drove me to the store on a Saturday morning, then rushed me home to play ball in the meadow my friends and I had occupied at the top of Janice Avenue. The regulars were there, joined that morning by a greasy punk from Crosby Road. He was fifteen going on twenty-five: duck’s-ass hairstyle, pack of Winstons rolled up in the sleeve of his white t-shirt, and pegged black chinos. He always wore pointy dress shoes, which made him slip all over the grass. He never brought a glove either. That day my team took the field first. I was at shortstop. The hood came up to the plate, a butt stuck in his mouth. He had my shiny bat with the white handle and brown barrel. When he hit the ball, I heard a loud crack and felt sick. I knew he had hit the ball on the bat’s label, which everyone else knew not to do. We were so conscious of that, especially with a new bat—”Turn the label away from the pitch. Don’t hit it on the grain.” How many times did we hear that? I should have made him buy me a new bat. He said it was a mistake. I fumed. When I got home, I nailed and taped the bat, but it was dead.

In high school, I wore number 25 for four years on JV and Varsity, but it didn’t make me a power hitter. As a college student, I saw one of his second-comeback home runs at Fenway, a patented Green Monster job. Years later, he collapsed in his brother’s car on the way to an interview with a Boston TV station. He was being considered for the color- man position on the Red Sox broadcasting team. By the time he reached the emergency room he had brain damage. After years of round the clock care, Tony Conigliaro died on February 24, 1990. He was a thrilling hitter with a big swing. I didn’t expect anything from him except a homer every time he stepped into the batter’s box. I tracked down that old baseball card because the cracked bat is long gone.