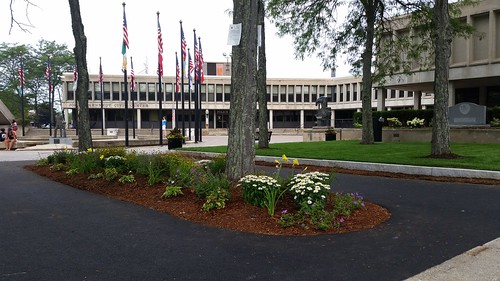 This year’s Lowell Folk Festival kicks off Friday night with a parade at 6:30 pm and the opening ceremony at Boarding House Park at 7 pm. The Festival website provides a full schedule of performances and activities. 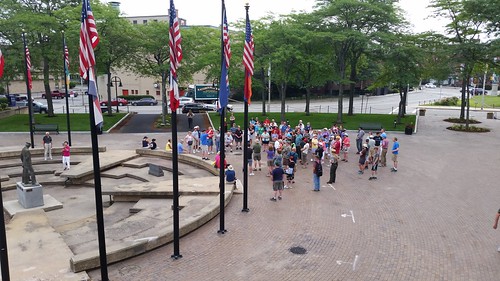 One interesting twist this year is a greatly expanded Destination Lowell on Merrimack Street. Here’s a press release from the Lowell Cultural Affairs and Special Events office that describes what festival-goers can expect:

Destination Lowell will transform Merrimack Street by creating hubs of activity for visitors to enjoy.  These activation areas will include three themes: Outdoor Fun and Sports, Events and Happenings and Lifestyle.

Destination Lowell will give visitors a glimpse of the community’s diversity by showcasing dozens of local organizations offering information, give-a-ways and more.  Some of the organizations include Lowell Celebrates Kerouac, Western Avenue Studio and Merrimack Repertory Theater.

The inclusion of the activation areas on Merrimack Street will add to the festival experience for those looking to explore the areas between festival stages.  The first activation area, Outdoor Fun and Sports, will create a unique setting with artificial turf and interactive games, sports and fitness activities.  In addition, there will be giant outdoor games for all to enjoy.

The Events and Happenings and Lifestyle areas will include resources and demonstrations for the festival crowd as Destination Lowell partners with and DIY Lowell, Lowell Kinetic Sculpture Race, Puerto Rican Festival and Made in Lowell to highlight upcoming events and with Mill No. 5 to promote local businesses.

Destination Lowell will highlight the many things to enjoy in Lowell, showcase local organizations and promote community resources by creating a fun atmosphere for all ages to enjoy.

Busy Week for Planning Board

The Lowell Planning Board had a busy week with two meetings, one on Monday night and the other on Wednesday.

The project received a hostile reception and after a request for a continuance was denied, the proponent withdrew the proposal rather than have it go down to defeat (which I think would prevent a similar type of permit application from being considered for that lot for at least two years). Board members expressed a number of concerns about the project, including the scarcity of parking and the fact that parking spaces that the proponent was counting for use by the project were too far away; an inadequate amount of formal supervision for students who would be living there; and the lack of first floor retail or similar space that would link those already living in the neighborhood to this project.

I’m not sure if this means that this private dormitory proposal is dead or whether the proponent will come back with a new approach. The large parcel is still owned (I believe) by Jeanne d’Arc Credit Union, so it may now seek new proposals for the lot which it no longer needs for its operations which moved across Merrimack Street to a new building.

National Park Tour Bus Parking – The Planning Board also reviewed the plan to utilize space adjacent to the exit driveway from the Gallagher Terminal that runs between YMCA Drive and the Lowell Connector as parking spaces for tour buses visiting Lowell National Historical Park. Making this space available is a key pre-condition to further development of the Hamilton Canal District which is where those buses currently park. The proposed lot includes spaces for eleven buses which would enter the facility through the main entrance to the Gallagher Terminal, park in this gated tour bus lot, and exit onto YMCA Drive and then Thorndike Street to return to the National Park visitor center and pick up passengers.

The Board seemed pleased with the plans which were presented by the city. The city representative explained that the contractor who is currently doing the South Common walkway will be doing this project too. This new bus parking lot is expected to be completed by the end of this year.

Gervais Volkswagen/River Meadow Brook Rail Trail – Back in December, the Gervais Auto Group purchased a parcel of land adjacent to its current dealership on Industrial Ave for the purpose of expanding its footprint to accommodate its new Volkswagen dealership. The seller of this parcel was Pan Am Railways because the parcel held the unused rail line that runs from the Target plaza on Plain Street to Industrial Ave. Besides the rail line, this parcel either contained or had adjacent to it, River Meadow Brook.

While the rail line is unused, for many years it has been seen in planning documents as a key link in the ever-expanding network of biking and walking trails in Massachusetts. Specifically, it would help link the Concord River Greenway and the Bruce Freeman Rail Trail. The initial proposal to expand the car dealership would have blocked the future use of this long-envisioned recreational trail.

Although the Gervais dealership was under no obligation to accommodate the trail once it owned this parcel, it did need a zoning change from the Lowell City Council. That required the council to balance the public good of the trail with the private good of the business. I wrote about this conflict between business expansion and public recreational trails on November 13, 2016 and again on December 4, 2016. I also reported on City Council discussions of this proposal on November 15, 2016 and on December 6, 2016.

Back then, the council granted the zoning change but asked City Manager Murphy to work with Gervais and an abutting land owner, Av-Carb, to secure an easement over the Av-Carb property (which is on the Chelmsford Street or north side of River Meadow Brook) since the Gervais proposal could not accommodate the trail in light of the proposed Gervais use of the newly acquired parcel.

With that as background, this matter came before the Planning Board on Wednesday. The School Committee was already meeting in the Council Chambers so the Planning Board moved to the Mayor’s Reception Room. I didn’t attend the meeting and I don’t believe it was televised because of its location, so I’m not quite sure what happened.

I did find on Facebook several comments from supporters of the Bay Circuit Trail who seemed pleased with the outcome.  Here’s one that’s representative:

Planning Board unanimously approved Option B for the Lowell connection to the Bruce Freeman Rail Trail tonight. Thanks to the many supporters who showed up, the Board, The Conservation Commission and the Gervais VW dealership for this win-win for bicycle mobility and access to connect Lowell with the Bay Circuit Trail and The Concord Greenway!!

So what is Option B? To answer that, I went back and watched the video of the May 24, 2017, Conservation Commission meeting at which that board took up this matter.

The preliminary Gervais proposal called for a large area to the south of River Meadow Brook (on the Lowell Connector side of the brook, not the Chelmsford Street side of the brook) to be paved and used for the storage of vehicles. At an earlier Conservation Commission hearing, members of the Commission were unhappy with the idea of having a large paved area extending right up to the edge of the brook, which was what the preliminary plan proposed. With that negative feedback, engineers for Gervais took another look at the layout of the project.

At the May 24, 2017, Conservation Commission meeting, the engineer representing Gervais explained that once they pulled the parking area back from the bank of the brook as suggested by the Conservation Commission, they realized that it would be feasible to fit the trail easement in the space vacated by the reduced parking area. That would keep the trail on the south side of River Meadow Brook which was much preferred by the trail advocates. The engineer presented a new plan that showed two options for the trail. There was the original one, labeled Option A, which would put the trail on the Av-Carb property across the brook (even though the no easement from Av-Carb has yet been obtained); and a new one, labeled Option B, which would keep the trail on the south side of the brook, fitting it in between the bank of the brook and the edge of the scaled-back paved parking area of the Gervais operation.

It seemed that in the days leading up to this May Conservation Commission hearing, proponents of the various recreational trails and Peter Gervais and his representatives had met several times with good results. If Option B was to be adopted, Gervais was willing to pave the trail at the same time as he paved his new parking area, although he would seek the reversion of the $10,000 he had agreed to give to the Trail Proponents back when the zoning change was allowed, something the trail proponents fully endorsed. In addition, the Gervais engineer indicated that since the Gervais property would now be burdened by an easement for this recreational trail, that Gervais would be seeking a TIFF or some alternative property tax relief from the city due to the diminution of value of the lot.

The Conservation Commission on May 24 granted Gervais an Order of Conditions with a preference for Option B. Based on the social media comments made after this Wednesday night’s meeting, it seems that the Planning Board also approved the plan for Option B.

This would be a great outcome for the city. The business is allowed to expand, and a key link in a proposed recreational trail will not only be preserved, but made a reality. 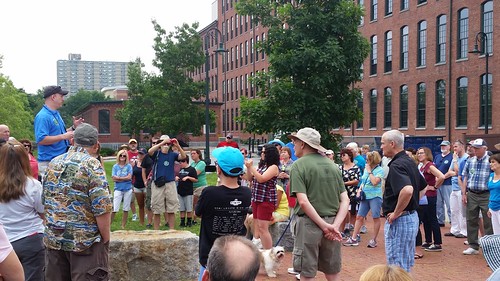 Yesterday’s Lowell Walk on Historic Lowell Fires drew 98 people who Jason Strunk, captain of the Lowell Fire Department, describe some of the most significant fires in Lowell’s history including the massive Lawrence Mills fire of 1987 and the deadly Decatur Street fire of 1982 which claimed eight lives.

Lowell Walks will skip a week due to the Lowell Folk Festival, but will resume on Saturday, August 5, 2017 at 10 a.m. when Chris Hayes and Aurora Erickson lead a walk on the Northern Canal Urban Renewal Project. 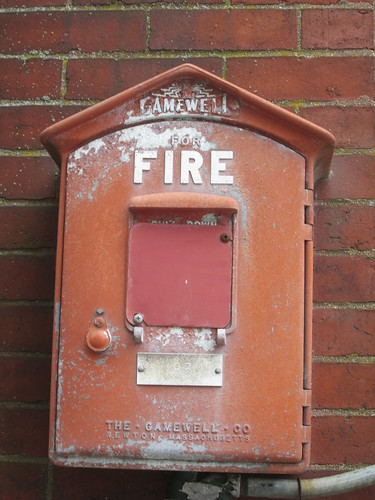 Fire alarm box, a relic from the pre-cell phone age