The Lowell City Council faces a dilemma this Tuesday night. A generous, longtime, Lowell-grown business, Gervais Auto Group, wishes to expand its operations on Industrial Ave. But the expansion plan threatens to block an important stretch of the long-planned River Meadow Brook Greenway that once realized, will be a great asset to the city. The dilemma for the council is to find a solution that works for both the business and the community. 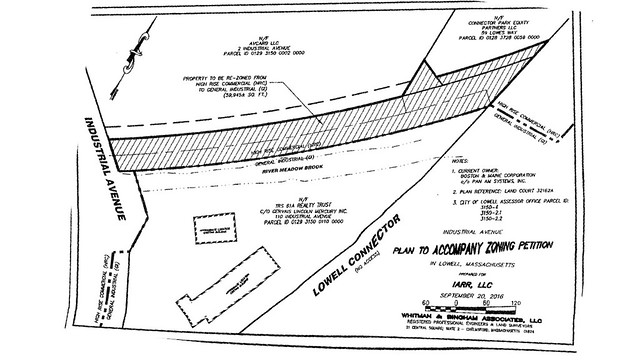 Gervais is in the process of purchasing a stretch of the old railway that runs alongside River Meadow Brook from the parking lot of Target on Plain Street to Micky Ward Circle on Industrial Ave. (The parcel is the cross-hatched area on the above diagram which shows Industrial Ave to the left and Target off the plan to the right). The Gervais Volkswagen dealership is adjacent to this rail bed and by purchasing it, Gervais will expand the parking area for its new vehicle inventory.

To carry out its plan, Gervais needs a zoning change from the city council. The rail bed is currently zoned “high rise commercial” which would not permit the storage and sale of cars. Gervais will ask the council Tuesday night to change the zoning to “general industrial” which would permit the car dealership to expand onto the old railway line.

This proposal came before the Planning Board Monday night for a recommendation. After a public hearing, the Board voted to recommend the city council approve the proposal. At the public hearing that night, when the Planning Board chair asked if anyone wished to speak in opposition, Jane Calvin, Executive Director of the Lowell Parks and Conservation Trust stepped forward. Here is some of what she said:

I do not oppose the project in general, but wanted to make sure there’s room for the rail trail. This is a critical link between Concord River Greenway and Bruce Freeman Rail Trail. I’m very concerned about how an easement might work. I love the idea that an easement for the trail is included. I just want to make sure we’re doing the right thing for the trail. Connecting to the Bruce Freeman Trail along this stretch makes the most sense. We’d love to work with all the parties involved to make sure there is access. The smartest thing would be to put the trail along the brook which is a significant body of water. It would be easy to develop. People are already using it. I don’t want to lose it now. It has great regional and local importance.

The city’s 2012 Ayer’s City Industrial Park: Urban Revitalization and Development Plan which has as one of its objectives to “protect land and ecosystems,” specifically states that “The Plan is designed to reclaim River Meadow Brook (Hale’s Brook) as an urban recreational amenity and improve conservation above its current use as an industrial run-off area.” P. 11.

The plan explains “There has been longstanding interest in creating a greenway along River Meadow Brook. A River Meadow Brook Greenway would provide the link between the Bruce Freeman Trail near Cross Point Towers on the southern boundary of Lowell and the Concord River Greenway to the east, an ongoing project that also connects to the Merrimack River Trail. These trails are all segments of the Bay Circuit Trail, proposed to eventually encompass a continuous trail extending from Newburyport, MA to Kingston, MA, a span of more than 100 miles.” P.81.

The Lowell Parks and Conservation Trust has been the prime proponent of making the River Meadow Brook Greenway a reality, pursuing the objective for a number of years, even leading walks along the rail bed to raise awareness of its potential as a recreational trail for the city.

After Jane Calvin spoke at the Planning Board meeting, Attorney Phil Nyman, representing Gervais, told the board:

City Manager Murphy has spoken to us about a walking trail. We have made a major concession by representing to the city that once this zoning change is approved, we will grant an easement on half of this parcel for use for the trail. It will not have cars on it so groups that want to have a trail can use the end near Target for a trail at no charge to us. We have agreed to work with the city to draft an agreement that reflects this understanding.

While it’s commendable that a portion of this parcel will have an easement for recreational uses, Attorney Nyman’s comments suggest that the easement will be on the back half of the parcel – the part furthest to the right on the above plan and that the recreation easement – the intended trail – will not reach all the way to Industrial Ave. Maybe I’m missing something, but that seems to frustrate the purpose of the River Meadow Brook Greenway, which is to connect the Bruce Freeman Trail (which begins across Industrial Ave) with the Concord River Greenway (which begins at the eastern end of River Meadow Brook).

This issue seems like a replay of the Western Avenue access issue. In 1995, Western Ave had been open to Thorndike Street for more than a decade, but rather than continuing to assert continued access, the city council at the time concluded it wasn’t needed and gave away the city’s rights to cross the railroad tracks. At that time, no one foresaw Western Avenue Studios which now contains hundreds of artists/small businesses who would benefit greatly from access through to Thorndike Street. But because a prior city council relinquished those rights, restoring them seems nearly impossible, or at least impossibly expensive (there’s a proposal for a multi-million dollar pedestrian bridge over the tracks). If the council had preserved the city’s rights back in 1995, this wouldn’t be a problem today.

Gervais Auto Group is a great local business that does much for the community. I have bought my last seven cars from the family (the first, a Buick Skylark, when they were still on East Merrimack Street) and have every intention of buying my next car from them. The city should cooperate with their interests in expanding their business. But that doesn’t mean the city council should abandon the great potential of the River Meadow Brook Greenway while it is still in its infancy.

There are competing interests, but there are also intelligent, well-meaning, and creative people on both sides of this issue, so there’s no reason why a compromise that works for both sides, the car dealership and the Greenway proponents, can’t be reached.

Below are some photos of the intended route of the River Meadow Brook Greenway from last December’s “Under the Connector” Lowell Walk: 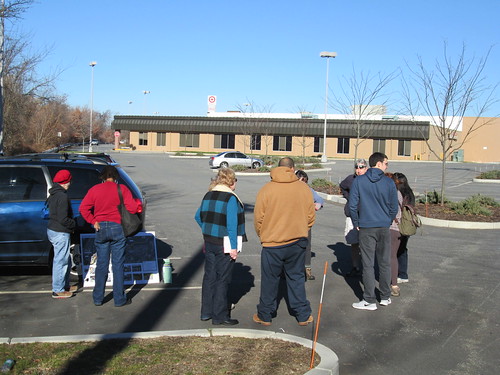 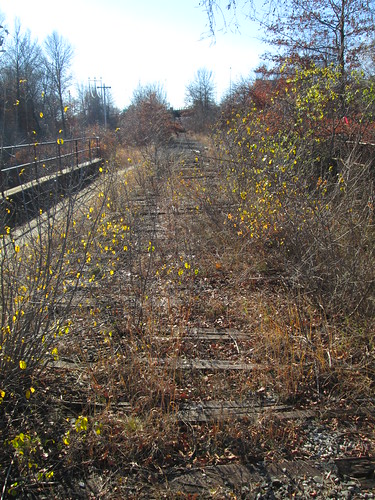 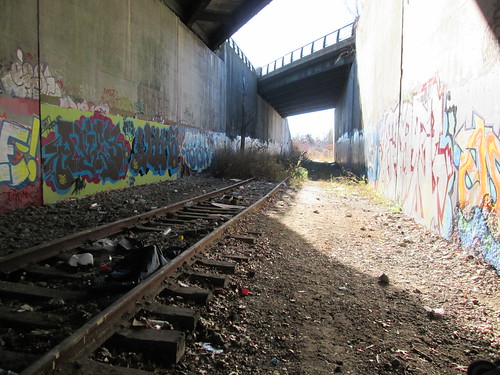 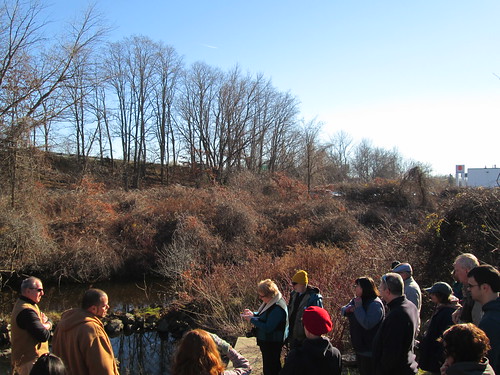 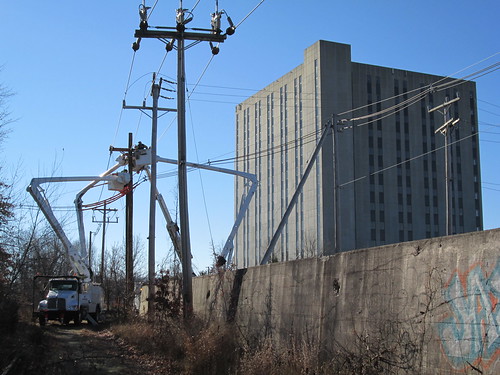 Coincidentally, another aspect of the Ayer’s City Revitalization Plan is on the council agenda Tuesday, and that’s a report on the realignment of the intersection of Tanner and Plain Streets. The plan is to shift Tanner Street southward so that it comes out between the car wash and the VFW building, intersecting Plain Street opposite the entrance to Target, which has an existing traffic signal. This realignment will greatly improve access to and from Tanner Street, especially for trucks.

The report to be delivered to the council states that representatives from the city met last week with the VFW and its potential developer to negotiate the exact pathway this new right of way would take. Watermark Engineering is doing the design work for the city. Their plan is expected to be complete in February 2017. That plan will serve as the basis for final negotiations for right of way agreements (or land takings) with land owners. The city is using a $250,000 grant from the state’s Office of Housing and Economic Development to pay for the plan development. This Tanner Street realignment is a pre-condition to major revitalization efforts all along Tanner Street. The city expects that effort to create 200 construction jobs, 670 permanent jobs, and $30mil in private investment.

A strange thing happened to me on Friday. I agreed with a Lowell Sun editorial. “Give forgotten vets respect they deserve” observed that the final resting places of many local veterans “have been left unattended or obscured by the passage of time” and urged individuals and groups to start locating and rehabilitating such forgotten graves as a fitting way to observe future Veterans Days.

I spend a lot of time in Lowell Cemetery and don’t ever recall seeing the grave of a veteran (or anyone else) in a shabby state, but perhaps other area cemeteries aren’t as diligent.

Notwithstanding that, I do agree wholeheartedly with the spirit of this editorial. As a city, we do a good job naming public places in honor of veterans and a superb job in holding dedication ceremonies. But then we don’t do much to perpetuate the memory of the person who was honored.

Last summer, the city did a great job re-dedicating Cupples Square to Lieutenant Lorne Cupples, a Lowell resident who was killed in action in France in World War One. A permanent plaque explaining who he was and what he had done was part of the rededication.

Several hundred other men from Lowell lost their lives in World War One. Forty-three have squares named for them. Many are familiar places like Kearney Square, McOsker Circle, or McPherson Playground, but who knows anything about Paul Kearney, Arthur McOsker, or Frank McPherson? As the Sun editorial suggests, we all should know about them and remember them, their deeds, and their sacrifice. This coming year is the 100th Anniversary of America’s entry into World War One. A fitting way for the city of Lowell to celebrate this centennial would be to revive the stories of all those who died during that war and find a way to preserve those stories so that future generations do not forget them.