I’m pinch-hitting for Dick this week while he is otherwise occupied. Instead of his usual round-up of major happenings and ongoing issues, I will share some observations about life in the city. It’s helpful to step back and look at the big picture.

I had an opportunity to walk through the downtown this morning as leader of this week’s Lowell Walks. We had a live street-side Lowell poetry anthology, something I had not tried before. Reading poems in public is a challenge in itself; reading poetry outside to 83 people in five different locations was a bit of a crazy idea. But it seemed to work, based on the immediate response and social media reactions in the form of photos, videos, and comments. Thank you to everyone who participated. The Walks are off to a spectacular start: 170 people for the Western Canal tour with Dick; 226 for Abolition and the Underground Railroad with Bob Forrant and Emily Yunes; and 110 for the churches guided tour with Dave McKean and my wife, Rosemary Noon. The series continues next Saturday with Roger Brunelle and Sean Thibodeau doing Jack Kerouac’s downtown sites. On my tour we stopped at the Mack Plaza, Lucy Larcom Park, Boarding House Park, Kerouac Park, and Lowell Memorial Auditorium. Each location showed itself off quite well. The sun was warm and the air dry on a beautiful July morning. The city looked good.

All the work that’s been done for the past few decades to improve the downtown has paid off. Boarding House Park has become a favorite place for a lot of people. This morning it was green and shining after an outstanding concert by Randy Newman last night. The park was filled. I don’t know the attendance number, but there appeared to be at least 1000 people, probably more. Newman is a top-tier musical artist. I thought, He’s a big get for the Lowell Summer Music Series. Of course, they have many big names this season, including Vince Gill, Judy Collins, Graham Nash and Stephen Stills, Trombone Shorty, Buddy Guy, Lyle Lovett, and Rosanne Cash. Randy Newman was simply brilliant with his sharp lyrics and inventive compositions. He’s a virtuoso on the piano. He played a song about the Kennedy brothers and Cuba that he said he’d never done on stage before. His new song about Vlad the Impaler Putin was a sarcastic gem. A real pro on stage, he of course played “Sail Away,” “Short People,” “Louisiana 1927,” and “You’ve Got a Friend in Me” from the film “Toy Story.” I had never seen him perform, and probably would not have gone out of my way to catch him. But he was right here, down the street. Yes, it costs money, but the prices are lower than at Boston venues in general.

When I was on the board of the Cultural Organization of Lowell (COOL), we purchased a couple of season subscriptions to the music series for a few years. The tickets were made available to the public through the Pollard Memorial Library, much like a person can “take out” a museum pass for the big museums in Boston. The library had a system that was as fair as it could be—I think library card holders were limited to one ticket for one time during the season, on a first-come, first-served basis. That would give 34 different people a chance at a ticket this year, for example. It was an attempt to give more people an opportunity to get to the big shows at Boarding House Park. Maybe COOL could try that again. The Lowell Cultural Council might be able to get in on something like this also, depending on their guidelines, paying for a couple of season ticket passes. A gift to the Greater Lowell Community Foundation would be another way to fund a set of passes like this. This would be a good goal for the 2018 season. Giving people access is important. The free concerts for kids on weekday mornings provided by the series’ organizers and sponsors are wonderful, as is the free admission to night concerts for young children. The national park, Lowell Festival Foundation, and the donors have created a welcoming spirit there.

When my tour got to Boarding House Park, the stage was filled with people doing yoga. Just let that sink in. Poetry and yoga on a Saturday morning at the downtown park. Sounds like Cambridge or Boulder or Berkeley.

Rosemary and I are just back from five days in New York City. We stayed in a hotel near Times Square. One of the places I wanted to take a close look at is Bryant Park, just near the New York Public Library. It’s a remarkable public space, about the size of Post Office Square Park in the financial district in Boston. The theme is public participation. Bocce or boule/petanque, ping pong, chess and backgammon sets and tables, a reading “room” with newspaper racks and book carts, a carousel for kids, plenty of chairs and tables all over the place, game stations, power sources for devices, performances and readings, movies at night, classes on everything from juggling to meditation, sculptures, lots of flowers and plantings, a putting green, tai chi and yoga sessions, food kiosks, high-end restrooms—all this and more. We went there three times. Rosemary got in on the juggling class, showing how she can keep three balls in the air. We played chess—she won. We ate in the very nice restaurant with outdoor seating between the park and the library. There were all kinds of people in the park each time we stopped by. 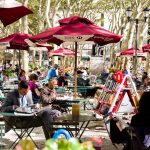 One of the objectives of the Lowell Waterways Vitality Plan is to turn Lucy Larcom Park into a year-round active public space with the kinds of offerings seen at Bryant Park. On a smaller scale in Lowell, this does not seem unrealistic. Lucy Larcom Park is centrally located and connects the Merrimack-Middle-Market street area (3M District, new name?) to French Street and the Boott Mills area with Mogan Cultural Center, Boarding House Park, Boott Museum, and all the residences on that side of downtown now. This would make a dramatic difference downtown. The mantra of the Waterways Vitality project has been “Just Add People,” and this is one way to do it. I was glad to see the Waterways Vitality project had an ad in the Summer Music Series brochure and got a shout out as a co-sponsor last night.

Dick will be back in this space next week. I hope every one of our readers has a good week coming up.