My Week in Review post last Sunday took up the issue of parking. It received some thoughtful comments. One disputed my assertion that from a traffic and parking perspective, Lowell was too big to operate like a small town and too small to operate like a big city. To the contrary, our in-between size is a great asset, the commentator said. The older but still sturdy housing stock on the periphery of downtown has much unrealized potential.

Walking around the Clemente Park and Chelmsford Street neighborhoods, you are continuously reminded that early in Lowell’s existence, people had to live close to downtown. That’s where the jobs were and with no readily available transportation system other than walking, houses were built close together so people could walk to work. In the century since were constructed, these houses have not moved farther from downtown – they are still within reasonable walking distance. Add to that the proximity of the Gallagher Terminal with its commuter rail to Boston, and of the Market Basket at Broadway and Fletcher, and this housing could be quite attractive to people who want to minimize their reliance on cars. Yet these neighborhoods seem forgotten and left to fend for themselves. Promoting these close-in neighborhoods as ancillary housing to downtown would seem like a fruitful strategy since anyone who worked downtown or commuted to work in Boston via commuter rail, could live in these very nice houses and walk to work or public transportation. And anyone who walks to work or to commuter rail, will not add to traffic and parking congestion in downtown. 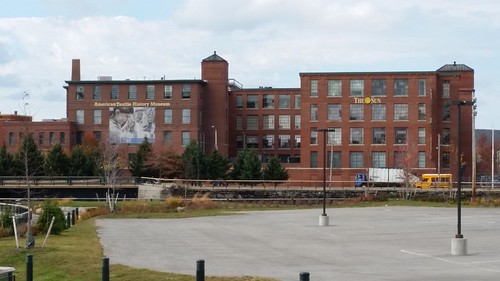 Last Monday, the Sun had an article about the future plans for the American Textile History Museum building on Dutton Street. The Museum closed permanently last year and the new owner, John DeAngelis, hopes to revive the building as a combination of residences and commercial uses, much like the very successful Mill No. 5 is already doing. Plans call for adding 15 residential units (which will give the building a total of 60) along with 20 to 30 small shops and a restaurant with outdoor patio space.

This is great news, especially since the developer has an established track record of projects in this city. But nothing he mentioned addresses the problem of Dutton Street. From City Hall to the Lowell Connector, the Dutton/Thorndike Street corridor is designed to be a high speed auto route between downtown and the Connector (hence it’s formal name, the Sampson Connector). The 1960s-era planning that brought us the Sampson Connector was antithetical to walkability. Just as the attractiveness of housing in the Acre and Lower Highlands is diminished by the difficulty of crossing Dutton/Thorndike on foot, so will the future success of the DeAngelis project turn on the ability of people to easily walk from downtown to the site – something that’s not possible now. 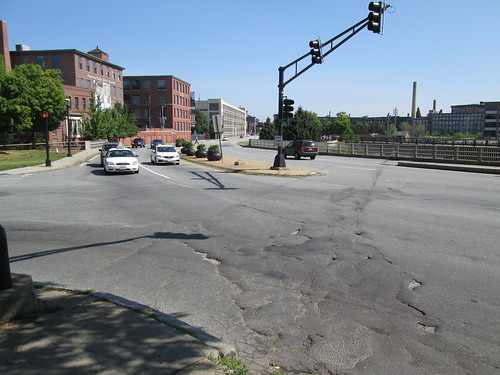 Dutton/Thorndike Street – no place for walkers

The upcoming Lord Overpass renovation/replacement project is our best hope of remedying this walkability problem. But I can’t remember the last time we heard anything about the Lord Overpass planning process from City Hall. Maybe it’s time for another public meeting. 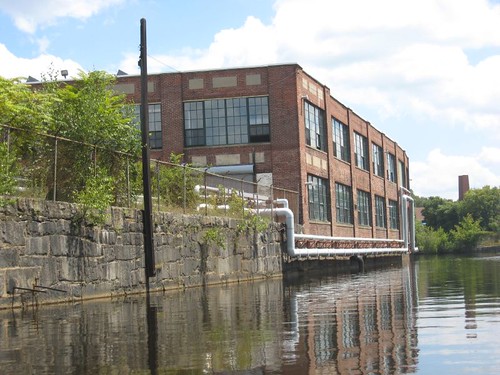 Related to the above is a project still in the conceptual stage called the Upper Pawtucket Canalway. To remind everyone, the Pawtucket Canal runs from the Merrimack River and Pawtucket Street (near UMass Lowell South Campus and alongside the Lowell Motor Boat Club) all the way to the Concord River behind the UMass Lowell Inn & Conference Center. The “upper” portion of the Pawtucket runs from the river to Thorndike Street, running mostly between Middlesex and Broadway streets.

Lowell National Historical Park already has a portion of this walkway in place. It runs from the river to the Francis Gatehouse on Broadway. The National Park hopes to extend this walkway all the way to Thorndike Street and the Hamilton Canal District. It is my understanding that the National Park already controls canal-side right-of-way access sufficiently wide to accommodate a walking and biking pathway with a planted bed separating it from the adjacent private property, so there will be no need for costly and time-consuming property-right acquisitions.

All that is needed now is the funding. But if you’ve been paying attention to the national news, the likelihood of several million dollars coming from Washington to someplace in Massachusetts for construction of a canal side walking and biking trail is beyond remote. However, that should not cause the project to be abandoned or moth balled.

As a community, we should come together to pursue the accomplishment of this Upper Pawtucket Canalway. Think of the benefits to UMass Lowell. This would provide a direct bike and walking route from the Gallagher Terminal to the school’s South Campus. It would also provide a ready pathway for residents of the Acre and Lower Highlands directly into the Hamilton Canal District. 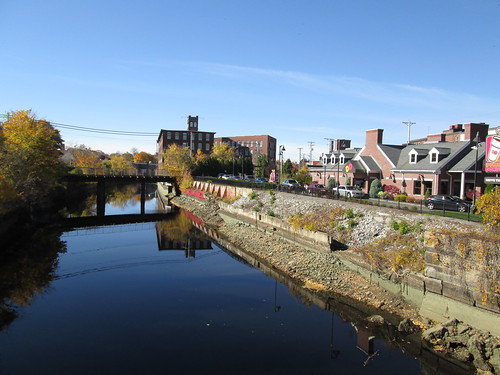 Pawtucket Canal from Thorndike St. Western Ave Studios in background. Canalway would be on left side of canal. 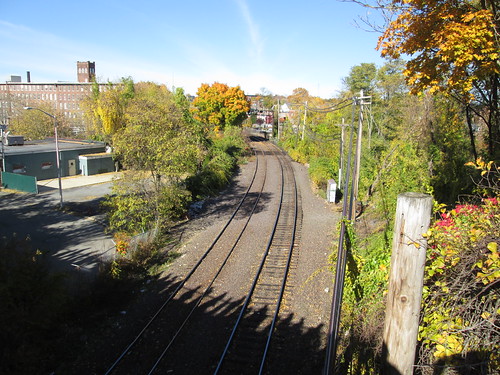 Railroad tracks from Lord Overpass. Western Ave Studios in upper left. Canalway would pass under these tracks alongside the Pawtucket Canal 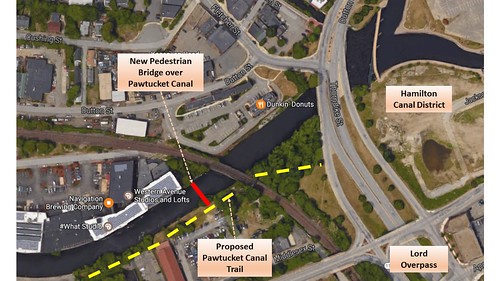 And the Upper Pawtucket Canalway might help solve a problem that has plagued the city for several years – how to create pedestrian access from Western Avenue Studios to downtown. The proposed Canalway is across the Pawtucket Canal from Western Ave, but a pedestrian bridge across the canal from Western Ave to the Canalway would be feasible and affordable. Then the Canalway would dip underneath the railroad tracks that have been the insurmountable obstacle to pedestrian access. Because the tracks are several feet above the elevation of the canal bank, a pathway going underneath the tracks would only have to dig down a few feet with gentle slopes leading to and from it.

Because this section of the Canalway is immediately adjacent to the Lord Overpass, perhaps some of the money being spent to remake the Overpass could be utilized to do this short stretch of the Canalway plus the pedestrian bridge to Western Ave. Doing that would solve the Western Ave access challenge and would also jumpstart construction of the longer Canalway. 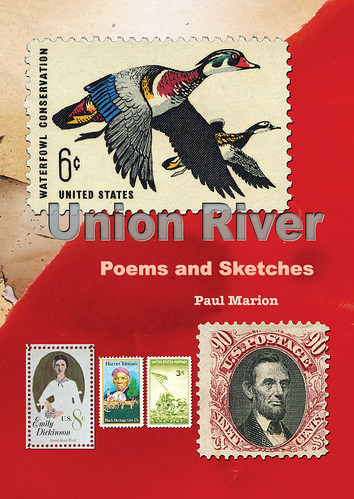 This coming Wednesday, May 3, 2017, at 4 p.m. at Mill No. 5’s Luna Theatre at 250 Jackson Street, Paul Marion will have the official launch of his new book, Union River (which I reviewed last week). Instead of a normal book launch event, Paul has teamed with the Lowell Plan to make the event a benefit of Public Matters, the Lowell Plan’s civic engagement program, which has helped train hundreds of young people for greater participation in the public life of Lowell. The suggested donation is $50 and can be paid at the door. The price includes an autographed copy of the book.

Next Saturday, May 6, 2017, at 10 a.m. at Lowell National Park Visitor Center at 246 Market Street, UMass Lowell Professor Bob Forrant and graduate student Rachel Arnason will lead a Lowell Walks tour on the Labor Movement in Lowell. The event is free, requires no advance registration, and will last about 90 minutes.

For more information about these and other upcoming events, please check out our Events page.

I missed the live broadcast of last Tuesday’s council meeting and caught a replay yesterday. Here is a summary of the major items discussed by councilors:

Finance Subcommittee report from April 24 subcommittee meeting, given by subcommittee Chair Rodney Elliott. Recommended motion that city manager prepare a report on the benefits and detriments of a debt inclusion ballot question for the Lowell High project. The second proposed motion is that the city CFO make an estimate of increased tax impact per property based on the expected price of the High School project.

A report already received by the subcommittee showed that 95% of the homes in the city will share the largest expense. Those are the houses valued between $250,000 and $450,000. These homes would experience an annual tax increase of $266 to $515. The subcommittee also reviewed how much taxes have increased over the past five years. During that time, it was a $100 cumulative increase spread over the five years which Elliott contrasted with the much larger single year (and continuing) increase associated with a new high school.

The subcommittee will continue to meet and explore the costs. Councilor Elliott says he has supported the high school project from the beginning, but over time it has grown from $250mil to $345mil which he says is a “staggering number.” He said the project is like a “runaway train” and he doesn’t know “how we can sustain this cost” or how homeowners will be able to afford the tax increase to pay for it. Elliott suggests that the project should be scaled back considerably to reduce costs and to construct something we can afford.

Councilor Leary speaks on the request for information on debt exclusion. Says he wants information but also a recommendation from the city manager. Says if we built a new high school ten years ago, it would have been $150mil. If we wait another ten years, what will it cost then? Says the only shortcoming for the high school in its last accreditation report was criticism of the physical plant, so that must be addressed, otherwise the city risks losing accreditation of the high school.

Downtown Redevelopment subcommittee report given by Councilor Milinazzo. Subcommittee received a report on Lowell House/CBA proposal to build sober housing on upper Merrimack Street. Lowell House reports that it has reached an agreement/partnership with Lowell Community Health Center to base the clinical services with LCHC on Jackson Street. The CBA will then buy the existing Merrimack Street property now occupied by Lowell House, demolish that building, and construct in its place approximately 28 units of sober housing with commercial units on the first floor. The subcommittee voted to support the partnership and the project and offers the same as a motion for the full council’s consideration. The treatment facility will cover all addictions from alcohol to opioids. The council votes 8-0 to support the proposal.

Motion by Councilor Milinazzo asks for a report on personal property tax on artists, especially those at Western Ave (this was featured in a recent Boston Globe story). Motion passes; report will be forthcoming.

Here are some items included the information packet regarding this coming Tuesday’s council meeting:

Tanner Street Realignment – There’s a memo in this week’s city council packet regarding the Tanner Street alignment which is part of the bigger Ayers City Redevelopment project. The memo, from Kevin Coughlin to Kevin Murphy, reports that a breakthrough has occurred. The VFW will now sell to the city a portion of its property between Plain and Montreal streets which will allow the realignment of Tanner Street to move forward. This will cause Tanner Street to meet Plain Street directly opposite the entrance to the Target plaza where there is an existing traffic light. As part of this project, the VFW will construct a new but smaller building on another portion of the existing parcel. This new building will better fit the needs of the VFW. The city has Watermark Engineering continuing with the design work of this intersection. The VFW is expected to break ground on its new business in November 2017, so work on the street realignment will begin sometime after that.

The following motions will be taken up by councilors: