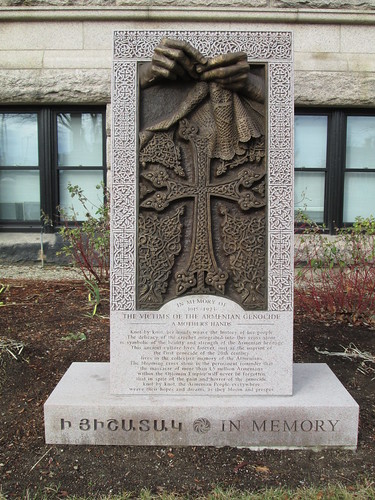 Today is the 102nd anniversary of the beginning of the Armenian Genocide.  It was in the early morning hours of Saturday, April 24, 1915, that close to 300 Armenian leaders and intellectuals were arrested in the city of Constantinople (now Istanbul).  Very few were released from jail. The majority were sent to a prison near Ankara.  How they died and where they were buried is not known.

What began that day and continued for years was the forced deportation and systematic, planned elimination of the Armenians.  The deportation resulted in the death of over 1.5 million Armenians.  Initially, the men were the victims, but then it was women and children.  Without food and regularly attacked by militia, very few reached the safety of Syria or Greece.

The victims of the Armenian Genocide are not different than the other victims who were subjugated by man’s inhumanity to man. But unlike other such victims, we – the Armenian people – have never received acknowledgement, apology or reparations from the Turkish government.

But the plan to eliminate all Armenians failed, and the attempt to do so resulted in a resiliency that is passed on from generation to generation.  This past Friday, Governor Charlie Baker led the State’s commemorative activities and this past Saturday in Lowell, Armenian-Americans gathered once again at City Hall to raise the flag and remember the victims* but also to continue the march towards full justice.