Lowell’s first Points of Light Lantern Celebration will take place this Saturday, April 22, 2017, from 5 to 9 pm at Ecumenical Plaza which spans the Western Canal in in front of Holy Trinity and St. Patrick’s churches at 282 Suffolk Street in Lowell. Organized by DIY Lowell and many community partners, this event will feature hundreds of personalized floating lanterns launched in the Western Canal, surrounded by diverse music, food, and traditions.

James Ostis, vice president of Lowell Heritage Partnership, shares the history of Ecumenical Plaza, a central component of the city’s Model Cities Program of the 1960s.

Ecumenical Plaza: A Model Project for a City’s Revival

This Saturday, community members of all backgrounds will descend upon Lowell’s Ecumenical Plaza for the stunning visual of thousands of lighted lanterns floating in a historic Lowell canal.  The event is the Points of Light Lantern Celebration.  For many, it will be their first visit to the plaza which has a unique and consequential history hidden in plain sight in Lowell’s Acre and for those who created the plaza it will represent just the type of cross-cultural event that they envisioned.

It’s become a well-known story in Lowell how the impetus for Lowell National Historical Park originated in the federally funded Model Cities program of the 1960’s.  Model Cities was a program that grew out of President Lyndon Johnson’s Great Society agenda focused in Lowell’s Acre Neighborhood and 150 others throughout the nation.  Lowell’s program began in 1967 and through the Model Cities educational component and its visionary director Pat Mogan, the idea of Lowell’s “Urban Cultural Park” began to take shape.

While Lowell National Historical Park represents the preeminent legacy of the Model Cities program, several other neighborhood improvements owe their origins to the organization’s urban beautification efforts.  Among this group of projects, Ecumenical Plaza stands out for both its scope and cultural significance. 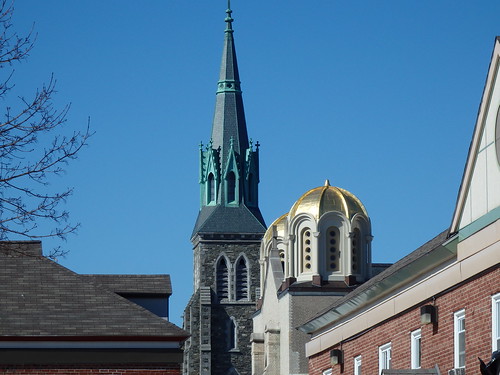 St. Patrick’s Church on Suffolk Street was the first Catholic church built in Lowell when it was constructed in 1831 to support the Irish immigrant labor force in the Acre.  Several decades later in 1906, Holy Trinity Greek Orthodox Church on Lewis Street was built as the first Byzantine style Greek Orthodox church in the United States and the first church built specifically for a Greek American congregation.  Throughout the 20th century the two religious icons straddled Lowell’s Western Canal while serving two of the Acre’s prominent ethnic groups.  Despite the close proximity, the buildings remained isolated from one another with only the small Jefferson Street bridge serving as an avenue for crossing.

It was John Tatsios’s dream to change all that.  A member of the Acre Model Neighborhood Organization (AMNO), Tatsios served as the chairman of the Model Cities’ Urban Design Task Force and often referred to Ecumenical Plaza as his own “pet project” as he himself described in the May 14th, 1972 edition of Lowell Sun.

A 2016 urban planning book Exploring the Production of Urban Space: Differential Space in three post-industrial Cities by Michael Edema-Leary Owhin examines Lowell’s planning history alongside other internationally significant cities, Vancouver, British Columbia and Manchester, England.  The book touches upon the development of Ecumenical Plaza in its examination of the Model Cities program’s impact on Lowell.  As the research shows, while the Model Cities projects were the result of community-led deliberations through AMNO, buy-in from all stakeholders was not always immediate nor guaranteed. 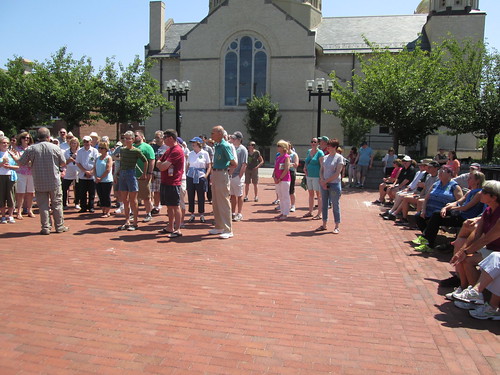 Ecumenical Plaza’s construction predated the establishment of Lowell National Historical Park by several years and as such the historic preservation mindset had not yet taken hold everywhere in the city.  Jack Tavares, the director of the Lowell Model Cities agency recounted an early interaction between the two church groups in a 1998 interview with Lowell city historian Mehmed Ali as part of an oral history series for the UMass Lowell Center for Lowell History:

“Father Gilopsis was the Pastor of the (Greek) church and he wanted to talk about the Western Canal.  And he wanted, uhh, free parking for the church.  ‘Now we do that by filling in the canals.’  ‘No, I’m not going to fill in the canal.’ ‘Oh yes we are!’ ‘Oh no we aren’t.’  ‘Oh yes we are.’  And father John says, ‘Boys! Boys! It is the Christmas season!’ {Laughing} They were good times.  You know, we had some battles, sure.  They were good times”

Beyond the scope of public park improvements and restorations that Model Cities had previously undertaken, Ecumenical Plaza was notable for its ambitious focus on human infrastructure as much as physical space.  The plaza would consist of a wide pedestrian bridge with several benches and tree installations, but most importantly would connect the two historic churches that had cohabitated the neighborhood for 70 years.  Architect Paul Lu of Belmont designed the plans and construction began in 1974 before completion the following year.  The project required support from a local taskforce, a larger neighborhood group, two churches, the city council and was ultimately paid for through federal funds.  Some researchers have concluded the collaborative multi step process involved in the creation of the new public urban space in Ecumenical Plaza provided an example of Lowell’s ability to undertake the much larger National Park project in the years that followed.

Despite the important history involved in and surrounding the project, Ecumenical Plaza has been underutilized in recent years.  Many locals who don’t frequent the area aren’t even aware that the plaza exists and while festivals used to utilize the space more regularly, these events have become much rarer in recent years. 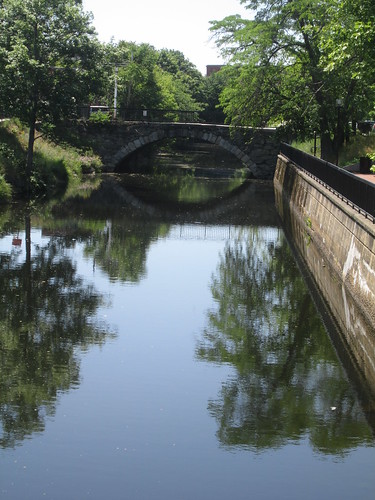 But things are changing on that front in part due to the Lowell Waterways Vitality Initiative.  The initiative is a collaborative effort launched by The Lowell Heritage Partnership and community partners in 2016 highlighted the plaza and the Western Canal as one of five focus areas for waterfront activation.  Another local organization, D.I.Y. Lowell specifically chose the plaza as the location of the upcoming Points of Light Lantern Celebration in response to the heightened awareness brought on by the Waterways effort and its location in the heart of a diverse urban neighborhood consistent with the event’s theme of celebrating the many cultures of Lowell.

The Points of Light Celebration will certainly be one of the largest public events hosted in the plaza in recent years.  Coinciding with Cambodian New Year celebrations earlier in the day, the event hopes to attract Lowell residents and visitors from all backgrounds.  Perhaps most notably, both historic churches have fully bought into the event and helped bring the Model Cities era vision of John Tatsios and others to life.

The Points of Light Celebration will be held on Saturday April 22nd at Ecumenical Plaza (between Suffolk and Lewis Streets) with festivities beginning at 5 p.m.  and the lantern lighting ceremony scheduled for 7:15. For more information please visit the Points of Light Lantern Celebration Facebook page.