Another essay by Bob Hodge, a 1973 graduate of Lowell High School, a 1990 graduate of University of Lowell, and one of the greatest runners to come from Lowell – ever. Bob has previously contributed, Running Down a Dream: Cohasset by the Sea Road Race, April 1978 and School Daze Lost in Time. In this story, Bob recalls the circuitous path he followed through higher education, running all the way.

“Bobby, listen to me man, you do your best and at the end of the day, win or fail, especially fail, you tell those demons to talk to Jimmy, tee he he”.—Voice inside my head.

I really can’t explain my ambivalence toward college. Perhaps a big part is just the point in time, the 1970.s when the expectation that everyone went to college was not necessarily the norm. Wanting to continue with athletics was the one thing that motivated me to attend college at Johnson & Wales JC in Providence RI after receiving an offer of an athletic scholarship.

It was a good opportunity and for a while things went well. I was in a business program and took courses in accounting, computer programming, and economics etc. I hated them all. My favorite course was typing. My running went well and I made All American at the National Junior College Cross Country Championships in Tallahassee FL. I also ran a personal best 9:08 for the 2 mile indoors. Academically I was the team leader in grade point cumulative average with a 2.0. Must have been all the hard work I put in…

I brought a small bookcase to school with me and a small collection of books mainly about athletics. I skipped classes and walked around Providence reading Babbitt by Sinclair Lewis and some other classic novels satirizing American Cultural norms.

After the fall semester I decided to leave J&W. Remembering hard I believe the main reason was our dorm situation. Our dormitory was formerly the Crown Hotel on Weybosset Street and I lived in a room on the seventh floor with my friend Wally from Lowell who was also on the cross country and track teams’

We were great friends but I felt I could only focus on academics if I had some privacy. “Hodgie, you want your own room? What is it; you just want to be able to beat off or what?”

I called my Dad and gave him the news. He didn’t try to talk me out of it but I could tell he was not happy about it. He came to pick me up and back home to Lowell I went. My Dad got me a job interview at Raytheon in Andover where he and my brother Mike were working. I also had Aunt’s and Uncle’s working there as well.

I got the job. I would be working on electrical cables for the missiles being built there for our national defense.  I made it through a three month trial period and then joined the IBEW Union. I was 19 years old. One day my supervisor took me aside and said “what are you doing here? Go back to school will ya, Geezus”.

It was not an easy transition to the working life. I also had a knee injury and my running was very limited. For a while I let the running go entirely and it was just work all week and go out with my friends to the local bars and play pool on the weekends.

For a while I thought this life I was leading was it and that scared me. I missed running as for all of my teenage years this activity had been my anchor. Eventually my knee came around and I began to run again with my old high school friend Emo. Emo was friendly with George Davis who was the Track and Cross Country Coach at Lowell Tech.

One day while running in the Dracut State forest we came upon the Lowell Tech Team with Coach Davis. They were preparing to run a Cross Country meet in just a few minutes. Emo and I asked Coach Davis if we could join in, unofficially of course and he said OK so we did.

I ran with the first runner Mike Orlando a Techie just off his shoulder the entire way and stepped off the course at the finish line. There was a funny picture of me and Mike in the school newspaper, Mike in his crimson red uniform and me bearded and wearing a plain white t shirt. I looked a bit like a crazy hermit coming out of the woods yelling “get off my land”.

After the meet I chatted with Coach Davis and he said if I was interested in returning to school I should drop by and see him. Eventually I did.

I gave my notice at Raytheon in December after almost exactly one year. In January I registered for classes at Lowell Tech. I was able to transfer my courses taken at Johnson & Wales although I already knew that I did not want to study business. At the time it just seemed simpler to go ahead and stick with business and get the degree.

I registered for mostly elective courses that first semester hoping that I would be able to change major later. I really had no idea what I was doing and didn’t get much guidance. It was nice being back in school after working for a year. When indoor track started I was woefully out of competitive shape and finished well back in my first few races.

By the end of the season I was running pretty well and by outdoor track I had a chance to qualify for the 1975 NCAA Division III Championships in Ohio. Academics went okay but eventually I fell into my same pattern walking around Lowell reading a copy of Bob Dylan’s Tarrantula.

I remember sitting in one class on European Civilization taught up in Southwick Hall on the third floor. The building was in need of repairs and just felt old and decrepit. The desks were probably original to the opening of the school here in 1903. 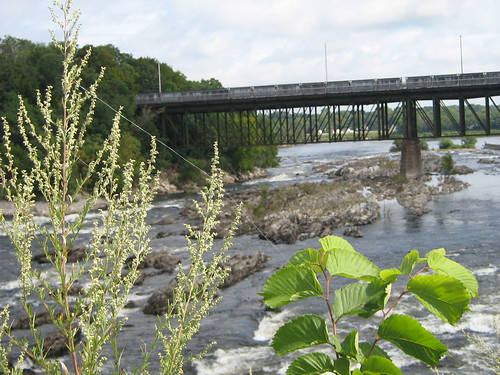 The professor was dull and it was all I could do to stay awake. I loved the view out the window to the river where the water “broken at the falls made frothy havoc on the rocks”—Kerouac

I sometimes fell into a hypnotic trance just watching the water on a colorful fall day making even drab mill town Lowell “throw out” with beauty.

Pigeons sometimes landed on the windowsills and occasionally would fly right into the classroom providing some comic relief.

In preparation for becoming the University of Lowell which would be a joining of Lowell State College just a mile upriver with Tech, we were able to take classes at either campus. I took a course in Great Books of Antiquity at State. I found that elective courses there were taught with much more rigor. The professors at Tech took it easier on those engineering students at no doubt.

I discovered that at State or as it has become known the South Campus, the library had a music room and an old friend of mine worked there spinning the LP’s. I would go in there and read Homer while my friend picked out and turned me onto jazz records my favorite being Giant Steps by John Coltrane.

I found that when I needed to remember my reading for class I only had to think of the music in my head and it all came back. It didn’t seem to work for accounting class though.

My running progressed well though I had my share of setbacks like everyone else. In 1975 I had begun running with the Greater Boston Track Club at the behest of my teammate at both Johnson & Wales and at Lowell. Vinnie was the NCAA Division III Cross Country Champion in 1975 running a thrilling race at the Franklin Park course in Boston and winning with a last lunge across the finish line.

Greater Boston had mostly older runners hoping to continue athletics after college. Among them was Bill Rodgers. We had great times meeting up at Boston College for workouts where Jack McDonald the club founder coached. Coach Bill Squires from Boston State College worked with us and it was a very committed group with lofty goals.

In the days before professionalism it was a struggle just to get to competitions and we mainly drove all over the east coast packed tight in a couple of cars. The club leadership did fund raising to pay the expenses for those runners who could qualify for national championships. We all supported each others efforts but were also very competitive amongst ourselves. A big goal for the club was to win the National Cross Country Championship as a team which we finally accomplished in 1979.

My personal dilemma in my deepest thoughts I wondered about the worth of this effort with athletics versus doing something that was a real career.

Once again I became disillusioned with school both academically and athletically. I never liked all the hype surrounding athletics at so many schools. I never had the rah rah mentality surrounding college football and basketball for example. Mascots, cheerleaders, nicknames let’s face it, I had no school spirit. It seemed juvenile to me.

When I told Coach Davis I intended to leave he set up a meeting with Dean King to see about changing my course of study. A new major was planned in American Studies something that sounded like a good fit for me. But I couldn’t picture myself as an intellectual so what practical use did this degree have? I needed to figure that out before committing myself.

I left school once again in January 1977 and I started working part time at Alexander’s Supermarket in Dracut with the goal of saving enough money to make a cross the USA trip, camping out going to many National Parks and places of interest.

My friend Ronnie was tired of his job and so we began to make plans for a June departure. Ronnie had a car which he traded in for a Dodge Van and we worked on making the inside into a living space for the road.

Hopefully on this trip which we were hoping to extend to a year, I would be able to have the clear mind to decide my best course of action.

Athletically I was pointing toward my first Boston Marathon in April.

At this point dear reader you have probably given up on me and my lame attempts at college. Believe it or not I did return to the University of Lowell and graduated in 1990 with an American Studies degree. Ten years later I got my Masters Degree at Simmons College in Library and Information Science. College worked out better the third and fourth times around.

From 1977 through 1988 I was a distance runner working in retail running shops and at athletic shoe companies but mostly running with a goal of making an Olympic Team and winning the Boston Marathon. I did not achieve either of those things but I came pretty close and it was a fine ride in the trying.

Professionalism in running and the running boom made my career more possible and on my cross the USA adventure was where I decided to pursue the running wars while I was young with the rest of my life for working a straight job.

And so not too surprisingly in my once inscrutable future, I became a librarian and so I continue to be that and a runner, an elderly shuffler out for his trot around the neighborhood.