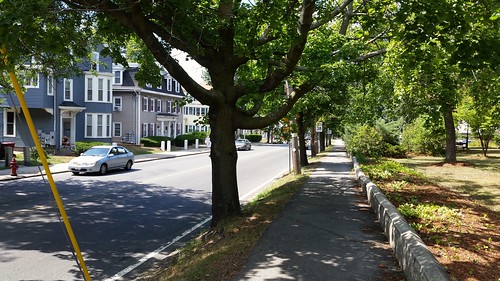 A proposal by the Massachusetts Department of Transportation to widen Nesmith Street (Rte 38) at several places calls for the removal of a number of trees that line the sidewalk alongside Kittredge Park. Citizens will have the opportunity to hear more about this plan and to share their thought on it to representatives of MassDOT this coming Thursday, July 28, 2016, at 7 pm at a public hearing at the Pollard Memorial Library. Yesterday, some people gathered at Kittredge Park to discuss the MassDOT plans. I spoke to them about this history of the park and the neighborhood. Here are my remarks:

In 1831, brothers John and Thomas Nesmith purchased 150 acres in Tewksbury from Judge Edward Livermore for $25,000. The following year, the brothers hired Alexander Wadsworth, a landscape architect from Boston who was the cousin of Henry Wadsworth Longfellow and also the designer of Mt. Auburn Cemetery in Cambridge, to design a subdivision for a portion of their land. 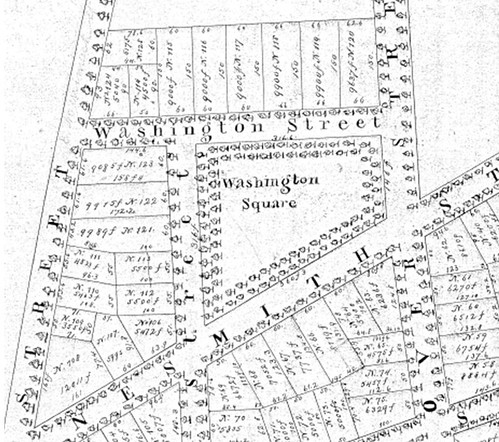 Wadsworth’s plan, dated May 1832, and entitled “Plan of a part of an Estate in Belvidere Village belonging to Thomas and John Nesmith” Wadsworth created a subdivision plan of 120 building lots and half a dozen streets, with a green space called Washington Square in the middle. A notable feature of this plan is the number of trees that Wadsworth drew on it. There are hundreds of them, all lining the streets with a double row of trees around Washington Square.

Two years later, on March 29, 1834, the Massachusetts legislature annexed 384 acres of Tewksbury to Lowell. This slice of land, extending from the Concord River to today’s Fairmount Street, included the Nesmith development, making it Lowell’s first residential subdivision. When John and Thomas built substantial homes of their own on either side of Andover Street, this became the most desirable neighborhood in the city.

On April 10, 1860, after the area had been fully developed, John and Thomas conveyed Washington Square to the city for $2100 and “in consideration of our desire to ornament the city in which we reside.” The conveyance included an express condition that:

“Said premises shall forever be kept open and unbuilt upon, as an open square or common, and that the same shall be kept by said city suitably fenced so that said premises may ever remain for the improvement and ornament of said city, for the comfort and benefit of those residing near the same, and for the health and resort of the citizens generally.”

A young couple who lived nearby, Edward and Effie Kittredge, were not members of Lowell’s elite; they were just ordinary working people. He was a machinist who became an electrician when that was a novel occupation, she took care of their two young sons, Paul, who was born in 1890, and Guy, who was born in 1898. Tragically, Edward died at a young age, leaving Effie with two teenage sons. She worked as a dressmaker and Paul took a number of jobs, including a driver for a bottling company (according to the 1910 census), and then as a painter and a printer.

On September 30, 1914, Paul married Sarah Hemmersley at the Immaculate Conception Church. They were both 24 years old. Paul also became an officer in the Ninth Massachusetts Infantry Regiment, a National Guard unit with a record stretching back to the Civil War. He was mobilized in 1916 and served on the Mexican Border. When the United States entered World War One in 1917, the Massachusetts National Guard was federalized and reorganized. The Ninth became the 101st Infantry Regiment of the 26th Yankee Division, an organization made up entirely of National Guard units from New England.

The 101st Infantry Regiment was the first National Guard unit to land in France and the first to enter combat. If fought almost continuously from the spring of 1918 until the end of the war. The 101st was part of the 1.2 million man American army that launched the Argonne Offensive in late September, 1918. Lasting 47 days, the Argonne Offensive caused 120,000 American casualties, including more than 26,000 killed in action, making it the deadliest battle in American history. Among those killed was Paul Kittredge, who had just been promoted to captain. He was killed by German artillery fire on October 23, 1918.

Paul Kittredge was buried in the Meuse-Argonne American Cemetery in France. In the 1920s, the city of Lowell renamed the park Captain Paul Kittredge Square. In the late 1980s, between serving in the U.S. Senate and running for President, Paul Tsongas, who lived just a few blocks away on Mansur Street, led a neighborhood effort to beautify and restore Kittredge Park to help perpetuate the wishes of Thomas and John Nesmith that this park would remain, in perpetuity, a place for the “health and resort” of the people of Lowell.