Last night several hundred people gathered at the UMass Lowell Inn & Conference Center to honor co-blogger Paul Marion on his retirement from UMass Lowell. After a short speaking program that featured remarks from UMass Lowell Chancellor Jacquie Moloney, Vice Chancellor of University Relations Patti McCafferty, and me – plus a song about Paul set to the tune of The Beatles’ “Penny Lane” sung by Lowell National Historical Park Superintendent Celeste Bernardo (who hit a home run with it) with the crowd on the chorus, Paul offered some remarks which he has kindly shared with us below: 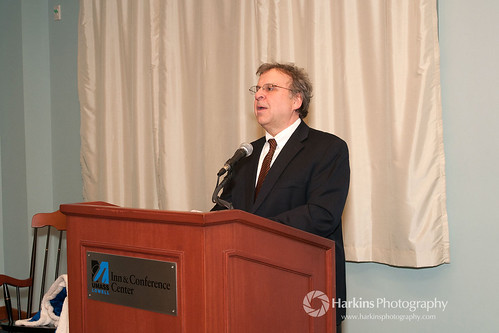 Thank you, everyone. Thank you, Chancellor Moloney. Thanks, Patti. Thank you, Celeste and Dick. I appreciate all the kind words. Thanks to my colleagues and community partners and friends here today. And thanks to the staff at the ICC for another first-class event. Let’s give them a hand.

A special shout-out to the people I’ve been working with every day in the community pod, Patty Coffey, Chris Wilkinson, and Colleen Brady.

It is an honor and humbling to get recognized in this way. Either you approve of my job performance for the past 22 years or you like the idea that I am finally moving on !!

Either way, that’s OK with me.

You all know I like authors and books. Henry David Thoreau in 1845 borrowed an axe from a neighbor to build his cabin at Walden Pond. It was a beautiful axe, Thoreau tells us. And when he was done, he was proud to report that he returned the axe sharper than it was when he received it.

In September 1974 I borrowed an axe called Lowell State College. I was a transfer student from Merrimack College going into my junior year. I had lost a federal grant that covered half the tuition at Merrimack, and I had a Massachusetts State Scholarship that covered the other half. But I didn’t want to borrow $1000 to continue at Merrimack, so I took my state scholarship, which covered the full cost of a public college ($250 a year at the time !!!), and enrolled at Lowell State. It was one of the best decisions of my life. I used that axe to chop through confusion, garden-variety ignorance, youthful indirection, and a blissful lack of awareness. I used it to put a finer edge on perception, curiosity, creativity, idealism, compassion, and even some anxiety about life.

When I think about my years here as a student, a staff member, an administrator, a graduate student, and last year for the first time a faculty member (in the Honors College for the first-year seminar on Lowell), no memories are more vivid than those from 1974 to 1976 when I earned a bachelor’s in political science. And the time is so memorable because of the teachers who gave me everything they had. I made a big developmental leap while I was here, studying political theory with Joyce Denning and American radicalism with history professor Dean Bergeron (Dean had Springsteen’s “Born to Run” before we did and introduced us to Robert Pirsig’s “Zen and the Art of Motorcycle Maintenance”); modern Chinese history with Pat Goler and Greek history with Chris Bentas; Buddhism with Chris Smith, and a course in aesthetics with him; watercolor painting with Carlton Plummer (“Think like a turtle and paint like a rabbit,” he advised); the American presidency with Nick Minton and constitutional law with Fred Lewis. I had been writing short stories and poetry for a couple of years, so I took a poetry-writing workshop with Arthur Friedman of the English Department, who was a top theatre critic in Boston. Later, when I was a really really old graduate student in Community Social Psychology, Charles Nikitopoulos in particular was a key mentor. I took it all in, and it helped make me the person I am today. I’ve always believed that excellent teaching is the competitive advantage of this university. It was true then, it remains so. Kudos to the teachers who are with us today !!!

I found myself back at the university in 1978, working in the communications office. I have to thank the office director Linda Frawley, who selected my application from a list of available candidates who were part of a federal jobs program (the Comprehensive Employment and Training Act program or CETA) during a tough economic period around here. Official unemployment was 12 percent, but the real figure was probably 20 percent. It seemed as if every other person who graduated with a liberal arts degree did time with CETA, and the jobs were white-collar positions in government offices, non-profit organizations, and public agencies. I said I was a writer on my application, and Linda gave me a chance to prove it. I learned how to write news stories and edit publications and manage events. That opportunity set me up for decades to come. It’s also where I met Fred Faust, who later hired me for the Lowell Historic Preservation Commission staff, providing me a chance to help build the national park.

I have had the good fortune to work with every president and chancellor of the university. John Duff, Bill Hogan, Marty Meehan, and Jacqueline Moloney. Speaking only about community engagement in this case, each of them moved the university into a deeper connection with the city and region. John Duff and Nancy Donahue invented the ULowell Foundation that produced extraordinary cultural events and forged the long-standing partnership with MRT. Bill Hogan collaborated with the City leadership in building the Tsongas Center arena and LeLacheur Park for baseball and shaped the partnership with the National Park Service that continues today—and he made the case that the university has to help the region to keep climbing the innovation ladder; Marty Meehan, with Jacquie Moloney, took the campus to the moon in less time than it took to get a man on the moon—they turned around the prospects at the arena and transformed the downtown hotel, and that was just for starters. Enrollment, fundraising, buildings—as we know, the school moved forward, “By any metric ….”; and now Jacquie, who knows the community through and through, has teamed up with City Manager Kevin Murphy and the City Council to make real the vision of a college town with a special emphasis on boosting economic development through entrepreneurship and innovation.

I also want to acknowledge the people who gave me an opportunity to work here. In addition to Linda Frawley and John Duff, I am grateful to Bill Hogan and Fred Sperounis, Catherine Quinn and John Wooding, Mary Lou Hubbell and Chris Dunlap, and Vice Chancellor Patti McCafferty.

Finally, I want to thank my wife, Rosemary, for her love and support through the many many years of my “working-all-the-time” and for listening even when I should have stopped talking. We’re both looking forward to a break.

So, back to that axe called Lowell State College, now the university. As it turned out I not only studied here as an undergraduate and graduate student, but I got the chance to work on the betterment of the school as an employee, whether it was the messaging and marketing or through events, community partnerships, and special projects. I had a chance to contribute. So in giving back the borrowed axe today, I hope I’m returning it with a sharper edge.