A poignant moment in the long struggle to uncover and record the grave markers and holdfast the history of the Irish in St. Patrick’s Cemetery as told by Lowell’s Irish historian Dave McKean… The twenty-year commitment may be coming to an end but read this cross-over post from LowellIrish  for the story….

Cleaning Day 2-  The weather was perfect.  Having completed the 21 shamrocks last week, it was time to tackle the stones of some of the heroes (and villains) of our upcoming tour (Saturday, October 3rd).  The trusty team of four set about the task and once again. We uncovered the grave of Sam Murray, victualer and constable.  He was a friend of Hugh Cummiskey and one can imagine Hugh visiting the grave of the young man who may have been like a son to him.  Then there’s the massive, almost 4 foot stone of James Sacnnell who died on 1848.  No record could be found of his life but he obviously had money to afford a white marble marker of that size inscribed with the symbol of the Agnus Dei, cross, and angels.  One can imagine the gleaming, white marble standing tall amidst the grey slates in the morning light.  Mr.  Scannell wanted to be remembered.  John Sinett was another of those whose graves fill Yard 1.   The city directory lists him as a laborer.  His marker says he died at age 44.  A little more investigating found he “died from a fall.”  His young widow probably spent more than she should to have a granite marker (why not slate like his contemporaries and less expensive) put upon his grave.  And what happens to Mary after his passing?   She is listed as widow for a brief time, and then disappears from any records.  As the team uncovers each stone we ask questions like this. 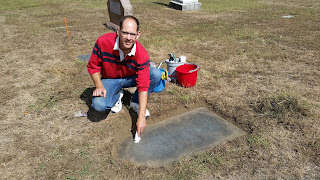 Today Providence paid us a visit.  Paul Butterworth called to say he was on his way.  Paul has been on the cemetery and Acre tours a number of times.  My memory, being what it is, forgets names easily.  Then it hit a bell.  I had contacted Paul a number of years ago when we sought permission from the cemetery officials in Boston to repair some of the broken stones.  Paul is a professional stone conservator and was willing to save  We had raised the money to do the work, but Boston denied us permission.  Let me note that was a decision made by Boston, not the cemetery office.  Today Paul arrived ready to work; many of his own family rest in St. Pat’s.  But I had other ideas.  Paul was kind enough to walk the cemetery with Walt and myself.  He saw the damage done to the stones, and I asked the question.  What do we do?  Paul noted that we have uncovered hundreds of stones, recorded their info, and done what we could to photograph them for posterity.  Our work is done.

some of our treasured shamrock and other historic stones.

For years we have had some wonderful volunteers who have given of their time and labor to preserve the history of our Irish forebears.  We thank you in their name most sincerely.  Even though they may not have been your own family graves, you have paid homage to their lives.  With all the help we’ve been given, and again we could not have done it without each one of you, even if you just did one stone, it is time to end our yearly cleaning.  The four regulars, Walter, Karen, Brenda, and I can do no more.  We are all at the point where we help each other stand up after kneeling for hours.  We have to admit that doing this for almost 20 years has taken its toll.  We are going to allow the slates to be covered over with grass clippings and sink back into the ground becoming shadows once again.  We have done our job and maybe someone in the next generation will pick up where we left off.

If you haven’t seen the shamrock stones, this year’s tour will be your last chance.  We may continue doing tours after this, but we will be focusing on the standing monuments.  Change is good.   After saying all this, a reminder we still have alumni day on Saturday, September 26 at 9 am.  We will clean the stones of the Sisters who served in Lowell’s Catholic schools.