Today we reach into the archive to remember Edith Nourse Rogers who until last year held the record as the longest serving member of Congress. Respected by both sides of the aisle, Mrs. Rogers served the Fifth District with a focus on her constituents particularly the Veterans. This seat (now the Third District) is held by another woman – Niki Tsongas.

After serving for 35 years as a Member of Congress representing the Massachusetts Fifth Congressional District, Edith Nourse Rogers died on this day September 10, 1960 – in the midst of her nineteenth Congressional campaign, three days before the primary. Mrs. Rogers – at the urging of his supporters – ran and was elected in 1927 to fill the seat held by her deceased husband Republican John Jacob Rogers. Before her election, Mrs. Rogers was long-interested in public affairs and volunteered for the Red Cross where she served as a Grey Lady working with veterans at Walter Reed Hospital in Washington DC. She joined the newly formed American Legion auxiliary and was appointed by President Warren G. Harding as a dollar-a-year inspector of the new government veterans’ hospitals. It was during this time that she formed her lifelong commitment to the well-being of our military veterans. Of the more than 1,200 bills Rogers introduced in her long congressional career, more than half concerned veterans’ and military affairs.

As a member of Congress she secured pensions for army nurses in 1926, a permanent Nurse Corps in the Veterans Administration (VA), and major appropriations to build VA hospitals. During World War II she successfully sponsored the legislation creating the Women’s Auxiliary Army Corps (WAC) and the Navy Waves. One of the landmark measures she sponsored and helped to draft was the 1944 GI Bill of Rights, which established veterans’ financial and educational benefits.

Rogers was beloved by her constituents – especially veterans of WWII – for whom she worked tirelessly, explaining she could not “refuse to spend mere money when I know that people need it.” She fought relentessly to protect the textile and leather industries of Massachusetts, won flood control appropriations for the Merrimack River basin, and was successful in securing jobs through the billions of dollars in federal contracts garnered for her state.

She was and remains the longest serving woman in Congress*, As the “dean” of congresswomen she proudly wore her most that most feminine of symbols – her trademark orchid or gardenia on her shoulder. (*Note – this record was surpassed  just recently by U. S. Senator Barbara Mikulski (D-Md).)

She was succeeded in office by a former aide to Senator Leverett Saltonstall and VA administrator   F. Bradford Morse of Lowell- later a UN Under-Secretary General for Development. The Fifth District seat came into the fold of the Democratic Party in 1974 when Paul E. Tsongas was elected to serve. He later went on to serve the Commonwealth in the United States Senate. His widow, Niki Tsongas holds that seat today winning election in 2007 to succeed Congressman Marty Meehan. 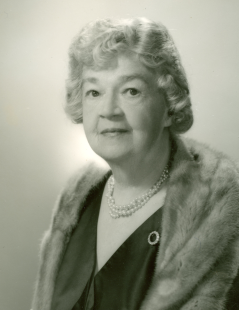 From MassMoments – On this day…

…in 1960, Representative Edith Nourse Rogers died of a heart attack in a Boston hospital, just three days before the end of her nineteenth campaign. The longest-serving woman in congressional history, she was first elected in 1927 to fill the seat occupied by her late husband. For the next 35 years, she represented her hometown of Lowell and the rest of the Massachusetts Fifth District, making veterans’ rights her highest priority. The fearlessness that she showed as an amateur pilot in the era of unsteady biplanes served her well on the House floor. She was an outspoken opponent of totalitarianism, denouncing Hitler’s treatment of the Jews as early as 1933, and an early advocate of the Equal Rights Amendment.

Read the article from MassMoments.com here to learn more about the life and times of Mrs. Rogers and the political and electoral fall-out from her death. And more here at: http://womenincongress.house.gov/member-profiles/profile.html?intID=209