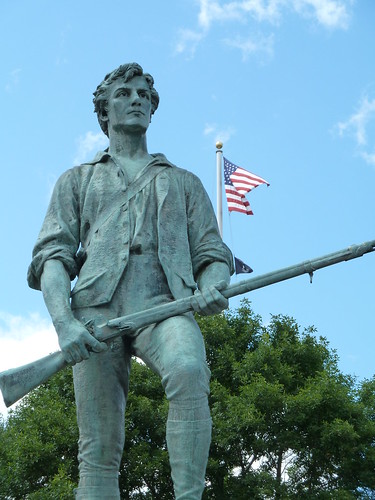 Joseph Plumb Martin was born in 1760 in Western Massachusetts and enlisted in the Continental Army as a teenager at the start of the war and served for the duration.  In 1830, he anonymously published a memoir of his service called A Narrative of a Revolutionary Soldier.  I picked up the book expecting a first person account of desperate battles.  There were a few of them but mostly this was a book about starvation and privation.  Here’s a sample in Martin’s own words:

At one time it snowed the greater part of four days successively, and there fell nearly as many feet deep of snow, and here was the keystone of the arch of starvation.  We were absolutely, literally starved; I do solemnly declare that I did not put a single morsel of victuals into my mouth for four days and as many nights, except a little black birch bark which I gnawed off a stick of wood, if that can be called victuals.

The book goes on like this year after year after year.  It is a graphic reminder that America won the Revolutionary War by not losing it, with a relatively small number of men who served in the American army enduring tremendous hardships for many years.

Local literature provides a glimpse of the plight of Revolutionary War soldiers.  Here’s a passage from History of Chelmsford by Wilson Waters.  Written and published in 1917, Waters relied heavily on original documents for much of his text.  In this passage, he quotes from the papers of C. O. Robbins:

The soldiers who fought in the Revolution had to foot it home if they survived the British bullets and the diseases which killed many of them.  They were a miserable lot.  They had to beg food and sleep where they could.  They dragged themselves home.  Dr. Marshall, who lived in the present residence of Mr. C. W. Byam, came home one day in December, 1776, and said he did not like the smell in the house, and asked if any soldiers had been there.  The answer was that one had stopped there.  The doctor’s fears were realized.  His wife and two children died of the small-pox; the soldier also died on the same disease.  Mrs. Marshall was a lovely woman, and the doctor was broken-hearted.

Given the significance of today’s date, I scoured Waters’ book for mention of the Declaration of Independence and the impact it had on Chelmsford.  Waters did not fail me, providing an excerpt from a journal kept by one of the town’s ministers:

September 1, 1776 – After today’s service, read the declaration of independence of the United States of America in the public congregation, agreeable to the order of the council of this State.  And when I had done, added “Zion heard and was glad and the Daughters of Juda rejoiced because of your Judgments, O Lord.”

Upon the signing of the Declaration of Independence two months earlier, John Adams wrote to his wife:

[The date of the signing of the Declaration of Independence] ought to be solemnized with pomps, shows, games, sports, guns, bells, bon-fires and illuminations from this time forward forever.

John Adams would undoubtedly approve of our modern method of observing Independence Day.  He would probably also urge us to remember the sacrifice of those who served in the Army during the war.  It was their almost superhuman endurance and fortitude that made the Declaration one of the foundational documents of the United States of America and not a death warrant of all who signed it had the war been lost.

One Response to Some thoughts on Independence Day