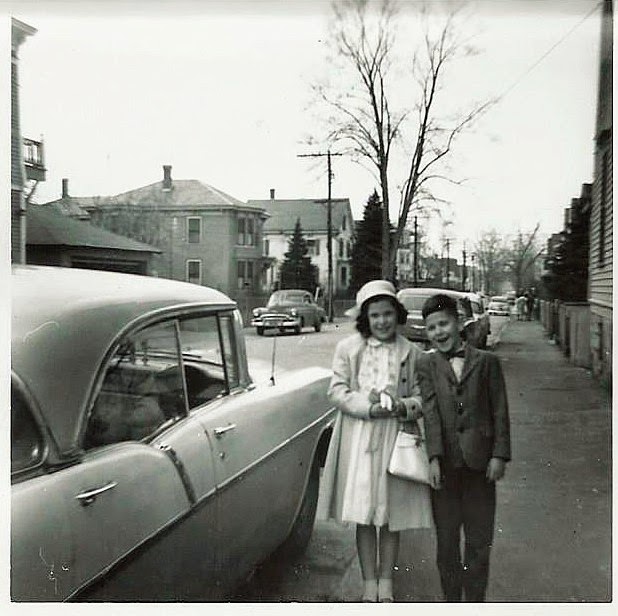 Easter on Walker St., 1960
Before I continue I have to tell you that my mother was a strict observer.  As a matter of fact I found out many years later she often made up her own rules.  For example even though I was maybe 8 or 9 everyone in the house had to keep a strict fast for the 40 days.  This was not the church’s rule, but Ma’s rule which superseded any canon of the church.  Supper on Ash Wednesday and all Fridays of Lent were meatless.  That was no big deal we were used to that.  Lunch at school was always white American cheese with butter on Wonder bread.  That was it.  My friends would have peanut butter and jelly or tuna, but not in our house.  It was Lent!  There was a Sister on duty in the school cafeteria where we ate in silence.  If the smell of baloney (or is it bologna now?) wafted across the room, the Sister would make a bee line to the offender and remove the victual before mortal sin could be committed.  A soul was saved!
Suppers weren’t too different; maybe grilled cheese or tomato soup.  Because of my mother’s Canadian background we might have crepes with Vermont Maid maple syrup.   I don’t think there was  ever a bottle of Aunt Jemima’s or Mrs. Butterworth’s in our home.
Since we couldn’t eat anything between meals I came up with a plan on how to stretch supper out and fill my belly.  We’d have supper at 5 and then I’d run over to my friend Ricky’s house where they had supper at 5:30.  His Mom would invite me in and I’d sit at the table.  So for 40 days I ate 2 suppers almost every day.  Some Catholics used the fasting to shed some winter pounds.  Me?  I gained them.
My mother must not have been too good at math because according to her Saturday and Sunday did not count as Lenten fast days. That meant a food free for all on weekends.  I recall one time I emptied out my piggy bank and bought one of those giant Hershey bars and ate the entire thing on one Saturday afternoon.  I was sure the belly ache I had was God’s vengeance for trying to outsmart Him.
When Passion Sunday would arrive every statue in church was covered in purple.  Palm Sunday was the Gospel that would never end, but it didn’t matter to us we’d be slapping each other with palm branches while it was going on.  Then on Good Friday there were the 3 hours of silence from noon to three.  I’ve heard others say they had to do the same, but I swear my mother invented it just to keep us quiet.
Without any exaggeration my earliest memory was of an Easter morning.  I couldn’t have been more than 3 or 4 but the trauma has strayed with me.  I’m sitting on the living room floor and my sister grabs my Easter basket.  It haunts me to this day.  Now that I think about it, this could be the reason why I still hide candy around the house.
Because of fasting regulation we could not eat for 3 hours before Communion, which meant the Easter basket would be in my room when I awoke, but nothing could be eaten until after Mass.  (This might have been the last of the Lenten disciplines.)  Our basket was a straw one from Green’s 5 & 10.  It had this terrible grass on the bottom on which any candy that was unwrapped would stay permanently stuck and you’d end up ingesting cellophane grass.  (We often found pieces of grass days later in the cat’s litter box. Don’t ask questions.)  The centerpiece was a giant coconut egg, which some years was consumed on the same day.  (Read: bellyache)    Of course there were those gross yellow Peeps, also stuck to the cellophane grass, some robin’s eggs, and to fill in the rest of the basket at least 5 pounds of jelly beans.  One year I found empty peeps cartons in the garbage.  I asked who was eating candy during Lent.  My mother swore it was not her, then she’d put on her kerchief to go to confession.
We did not go out for Easter dinner.  My mother would never spend good money on what she could cook at home.  The menu was always the same baked ham basted in Chelmsford ginger ale (seriously, try it!), carrots, cabbage, and mashed potatoes.  Dessert was a bunny cake.  Yes, a bunny cake.  Two round cakes cut into the shape of a bunny’s face.  It sort of looked demonic with its black jelly bean eyes, but it was tradition.  The rest of the afternoon was filled with watching Victor Mature in The Robe, Victor Mature in Samson and Delilah, and Victor Mature in Demetrius and the Gladiators.
My mother always received a one pound box of chocolates from Mrs. Nelson’s Candy House.  She’d bite the end off each one.  What she didn’t like she’d hand to my father for him to finish off.  I’d sit on the rug and sort my 5 lbs of jelly beans watching TV as Nero set fire to Rome and Victor Mature would battle in the Coliseum.