There is much about politics for which Massachusetts is well-known.  An infamous historical note rests with Governor Elbridge Gerry and his redistricting method known ever since as “Gerrymandering.” Cartoonists memorialized his efforts in a “Gerrymander” creature that  resembled that of a salamander-like monster. From the archive:

MassMoments reminds us that on this day February 11, 1812 the infamous political creature known as  the “Gerrymander” was born in the Massachusetts State House – conceived by then Governor Elbridge Gerry – a staunch Democrat-Republican. Caught in a nasty campaign for control of the government, Gerry sign a redistricting bill that greatly favored the state’s Republicans over the Federalists resulting in a Republican romp in adding new seats. The shape of the newly drawn Essex District  – Gerry’s home district – that included communities from Chelsea to Methuen to Salisbury – resembled that of a salamander-like monster. As the story is told:

Shortly after the bill was signed, Benjamin Russell, an ardent Federalist and Massachusetts newspaper editor, hung a map of the new district over his desk. It is said that the painter Gilbert Stuart visited Russell’s office one day, and seeing creature portrayed on the map, added a head, wings, and claws. “That will do for a salamander,” he said. The editor replied, “Better say a Gerry-mander!” Within a month, the image, with its newly coined name, appeared as a cartoon-map in the Boston Gazette. 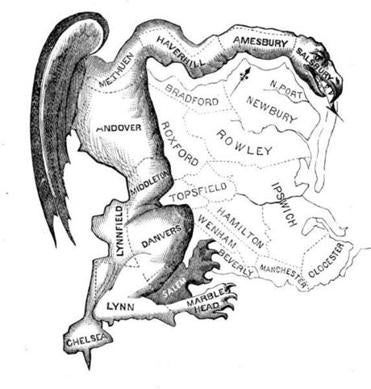 From then-on the  term “gerrymandering” has been used to describe any arrangement or rearrangement of voting district boundaries to influence the outcome of an election. Massachusetts has been reminded of this tale every ten years after the Federal Census when states redraw their district lines – particularly the Congressional districts – in order to reflect the results.  “Charges abound that the practice named for Elbridge Gerry is alive and well.”

Elbridge Gerry has an interesting political biography beyond his term as Governor of Massachusetts. Elbridge Thomas Gerry (1744–1814) was an American statesman and diplomat. As a Democratic-Republican he was selected as the fifth Vice President of the United States (1813–1814), serving under James Madison until his death.

Gerry was one of the signers of the Declaration of Independence and the Articles of Confederation. He was one of three men who refused to sign the United States Constitution because it did not then include a Bill of Rights. Her served in the U. S. House of Representatives. Gerry later became the ninth Governor of Massachusetts.

The iconic Parker House hotel – opened in 1855 and rebuilt in 1927 on School Street near the corner of Tremont Street in Boston –  named a suite to remember Governor Elbridge T. Gerry. We stayed in the suite just last June. This is the plaque in his memory…