It is my wont to remind readers of the important events in history that have a Lowell connection. Today we remember – with the help of MassMoments – the organization of the Massachusetts Sixth Volunteer Militia… From our archive…

This is a re-post from last year… but an important reminder of the formation and role of the Sixth Massachusetts with many volunteers who were Lowell millworkers.

MassMoments reminds us that on this day – January 21, 1861 – the Sixth Massachusetts Volunteer Militia was formally organized. In early January 1861, as civil war approached, the men of Massachusetts began to form volunteer militia units. Many workers in the textile cities of Lowell and Lawrence were among the first to join a new infantry regiment, the Sixth Massachusetts Volunteer Militia, when it was formally locally organized on January 21, 1861. The men met regularly to drill. In March, they were issued uniforms and Springfield rifles and told to be ready to assemble at any time. When Fort Sumter was attacked on April 12th, the men of the Massachusetts Sixth knew their days of drilling were over. And the rest is history – the history that is being remembered now as the Sesquicentennial of the American Civil War. There have been many posts on this blog about Lowell and the Civil War as part of the remembrance.

…in 1861, the Sixth Massachusetts Volunteer Militia was formally organized. With war approaching, men who worked in the textile cities of Lowell and Lawrence joined this new infantry regiment. They were issued uniforms and rifles; they learned to drill. They waited for the call. It came on April 15th, three days after the attack on Fort Sumter. They were needed to defend Washington, D.C.. The mood when they left Boston was almost festive. When they arrived in the border state of Maryland three days later, everything changed. An angry mob awaited them. In the riot that followed, 16 people lost their lives. Four were soldiers from Massachusetts. These men were the first combat fatalities of the Civil War.

Read the article here at MassMoments.com. 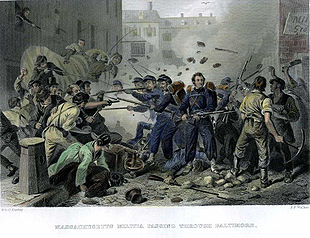 Sixth Massachusetts Militia Passing Through Baltimore, an 1861 engraving of the Baltimore riot