From its founding in 1915, the International Institute of Lowell has helped countless immigrants who arrived in Lowell in too many ways to list.  Recently, an enormous cache of documentary records dating from the earliest days of the Institute were uncovered.  Institute staff and historians from UMass Lowell are now poring through these boxes which capture in exquisite detail the challenges and accomplishments of wave after wave of newcomers to the city.  Those involve report that it’s especially rewarding to discover that of Lowell’s most successful citizens were past clients.

The International Institute of Lowell will highlight some of these records at an event later this year as a way of raising awareness of the organization and its role in helping newcomers make a smooth transition to life in the U.S.  That’s a mission I.IL. has always had.  The below photo is evidence of that.  It’s from 1956 and it depicts Mr. Sher Yin Chin, his wife, Bow May Chin, and his son, Way Man Chin.  Mr. Chin had come to Lowell earlier, worked hard, and eventually opened a restaurant at 65 Merrimack Street (right next to the Union National Bank building and home to Cravings, Etc today).  Because of bureaucratic complications, Mr. Chin’s wife and son (who had remained behind in China) were not permitted to join him in Lowell.  After much effort by employees at the International Institute, Mrs. Chin was permitted to come to Lowell where the family was reunited.  She soon became a U.S. citizen. 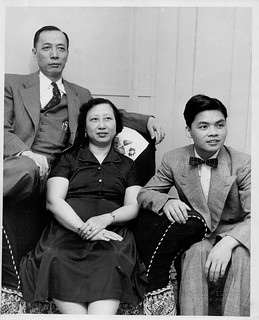