While in Washington a couple of summers ago, I was sure to visit the Museum of American History which was hosting an exhibit on “invention in 19th century America.”  I’ve always found the intersection of history and technology to be a fascinating area and I wasn’t disappointed.  The exhibit featured the Colt revolver, the telegram, the telephone, and many other momentous discoveries.  Still in the exhibit, I ventured into another room and was startled to see “James B. Francis and the canals of Lowell, Massachusetts” on display as one of the most significant inventions in 19th century America.  I always knew held an important place in the Industrial Revolution but I had completely bypassed the city’s role as a center of invention.

With this as background, I was thrilled to get notice of the local premiere of “Lowell: A Place of Invention”, a film produced by Lowell’s American Textile History Museum and Lowell Telecommunications Corporation.  The film will be shown next Tuesday, September 30, 2014 at 6:30 pm at Lowell Telecommunications at 246 Market Street.  It’s free and everyone is invited.  After the showing in Lowell, the film will be sent to Washington were it will be presented to the public at the National Museum of American History during 2015. 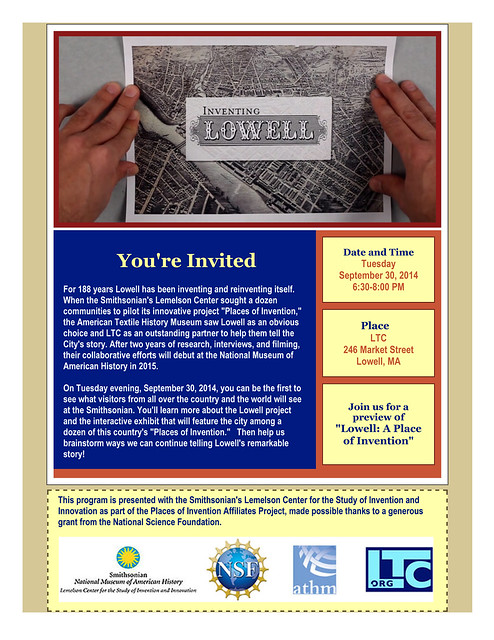