It’s been 13 years since the 9/11 terrorist attacks.  Here’s a post I did two years ago after a visit to the National 9/11 Memorial in New York City. 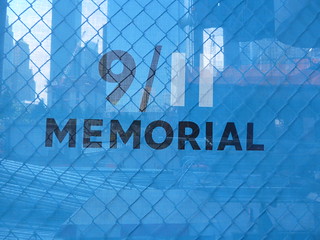 The National 9/11 Memorial is a fitting tribute to those who perished on September 11, 2001. The 8-acre site is dominated by two square reflecting pools, each an acre in size, that occupy the spaces where the twin towers once stood. Water cascades down the sides of these excavations, then flows across the bottom to a smaller square pit in the center where it disappears below. To me, the falling of the water and its disappearance were symbolic of the collapse of the towers. The falling water has a practical benefit: it muffles the conversation of adjacent visitors and creates a calm, almost soothing atmosphere. The polished granite parapet around each of the excavations is waist high and about 8 feet wide. Along it’s top face, the names of all who died that day are inscribed. Computer terminals on the site’s periphery make it easy to locate the spot where a particular name appears. 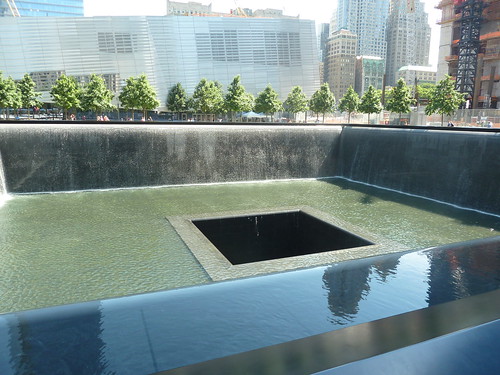 The photo above shows not only one of the reflecting pools but also the state of the rest of the World Trade Center area which is a construction site. The silvery horizontally-leaning building in the far distance of the photo is the entrance to the still under construction 9/11 museum which will also occupy the site. The museum will be almost entirely underground with the very large entrance structure enclosing several massive steel beams that remained upright after the collapse of the buildings. The exterior design of the entrance hall evoked in me at least an image of one of the old World Trade Center towers having fallen over sideways. The above photo was taken from the northwest corner of the northern tower, looking southeast. Visible are the many small trees that soften the site and that will provide shade and insulation from the city as they mature. On the other side of the museum entrance is the south tower reflecting pool. The site is very large.

Several new buildings that will be used for commercial purposes are under construction. Most noteworthy is One World Trade Center (shown below and formerly known as the “Freedom Tower”) which, when completed, will be the tallest building in the Western hemisphere and the third tallest building in the world. Right now, to get into the Memorial Site you have to make advance reservations and pass through airport level security screening. Once all the construction is done, the site will be completely open so that visitors can approach from all directions at all times. 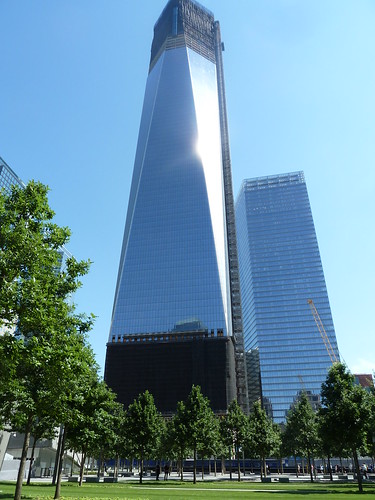 As someone who has become over the years a student of memorials around the country and the world, I give the 9/11 Memorial extremely high marks. It’s well worth a visit the next time you’re in Manhattan.