Shortly after Lowell received its charter in the early 1800s, the city adopted a seal.  Many people confuse the motto – “Art is the handmaid of human good” – with the seal.  True, the motto rings the seal but the seal is a type of mural in miniature that tells the story of the city.  The scene depicted in the seal evolved over time.  Bale of cotton, textile mills and canals are a constant.  In later versions a train appeared and the boat on a Middlesex Canal aqueduct gave way to a horse-drawn wagon on a stone bridge.  Of all the changes, the most fascinating one to me came in the 1894 version of the seal (shown below).  Suddenly the steeply of St Patrick’s Church stood in the center of the image, nestled among the mill buildings.  Knowing how the Irish were viewed by the Yankees who founded the city, having a Catholic church depicted in such an important symbol would have been unthinkable in the early decades of the city’s existence.  By 1894, however, the Irish had not only discovered politics, they dominated politics.  Showing St. Patrick’s in the middle of the city seal told all the world that the Irish controlled government in Lowell. 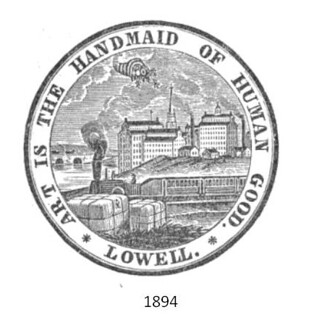 The influence of Lowell’s Irish was not limited to politics.  It was and still is a factor in almost every aspect of city life.  That’s why an upcoming conference at UMass Lowell later this month is so interesting and so important.

The Irish In Massachusetts: Historical Significance, Lasting Legacy, co-sponsored by UMass Lowell and Queen’s University Belfast, is an interdisciplinary look at the Irish in Massachusetts.  The conference will run from the evening of Wednesday, September 24 through the end of Friday, September 26, all at the UMass Lowell Inn and Conference Center.

More information about the conference including a list of speakers, a full schedule and pricing and registration information is available on the UMass Lowell website.