On a small patch of grass wedged between two busy streets in front of Lowell City Hall sits a twenty-five foot high granite obelisk. Few passersby know that this monument commemorates nineteen year old Luther Ladd and twenty year old Addison Whitney, two Lowell mill workers who, along with Sumner Needham of Lawrence and Charles Taylor of parts unknown, were the first soldiers to die in the American Civil War. Fewer still realize that Ladd, Whitney and Taylor are actually buried beneath the monument, right in front of City Hall. 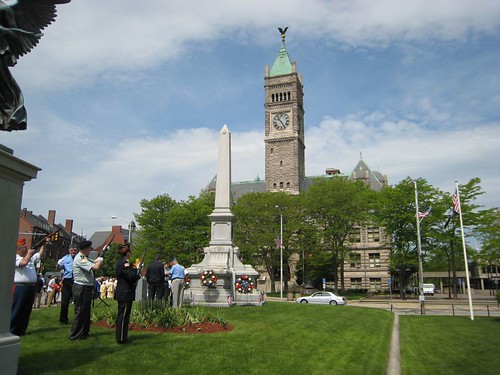 While our neighbors may commemorate Patriot’s Day by recalling the opening battles of the Revolutionary War at Lexington and Concord – not to mention the Marathon and an early Red Sox start – some in Lowell devote a few moments each April 19th to remembering the members of the Sixth Massachusetts Volunteer Infantry Regiment, a unit drawn primarily from Lowell and Lawrence, and their struggle in Baltimore on another April 19th. Here’s what happened.

Shortly after learning that the South Carolina militia had attacked Fort Sumter, President Abraham Lincoln called for 75,000 volunteers from the northern states to come south to suppress the rebellion. Because of the foresight of Governor John Andrew and Lowell’s Benjamin Butler (a general of the Volunteers) the Massachusetts troops were well organized, well equipped, and ready to leave on short notice.

The riot in Baltimore gave the Sixth Massachusetts an early prominence that was eclipsed by the enormous scope of the war and that regiment’s limited participation in it. At the time, however, Ladd, Whitney, Taylor and Needham were seen as “the first martyrs of the great rebellion” and provided the North with symbols to rally around. The men of the Sixth Regiment were not professional soldiers. They were ordinary citizens who came from all walks of life, from lawyers to laborers. Some died during the war, others never returned to the Merrimack Valley. Those who did return, however, made countless contributions both big and small to their respective communities throughout the post-war period. We still feel their influence today.

One Response to April 19, 1861: Lowell soldiers killed in Baltimore