Today is Ash Wednesday ~ the day that marks the beginning of the Lenten season that guides the  believer to the celebration of Easter Sunday. While its been many years since the churches of Lowell had pews overflowing with those waiting their turn to be marked on the forehead with a cross of ashes, the tradition –  more associated with the Catholic Church than other churches – continues.   Today in Lowell  the ashed-foreheads may standout but in days passed the millworkers, the shopkeepers, the city workers, the school kids, the professionals, the bank tellers and so on were the many not the few. 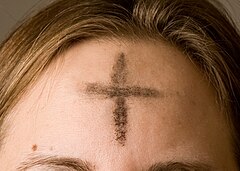 The ashes – as tradition and church custom dictate – are made from the palms from the prior Palm Sunday – those palms are burned, blessed and then placed on the foreheads of the faithful. While the ashes mark the beginning of Lent there are a list of regulations – promulgated annual by the U. S. Conference of Bishops – that guide the action of the observant during that time.
Lenten Regulations for the Archdiocese of Boston (From The Pilot)

Abstinence — Catholics over 14 years of age are bound to the obligations of abstinence. Abstinence s to be observed on Ash Wednesday (March 5) and on all Fridays of Lent. On days of abstinence, meat may not be used at all.

Fast — Catholics over 18 and up to the beginning of their 60th year are bound by the laws of fasting. Ash Wednesday (March 5) and Good Friday (April 18)  are days of fasting. On these days only one full meal is allowed. Two other meatless meals, sufficient to maintain strength, may be taken according to each one’s needs, but together they should not equal another full meal. Eating between meals is not permitted, but liquids, including milk and fruit juices are allowed.

Regarding other weekdays of Lent, participation in daily Mass and the voluntary observance of fasting is recommended. Commendable, particularly during Lent, is generosity to local, national and world programs of sharing our abundance, the traditional Lenten Devotions and all the self-denial summed up in the Christian concept of “mortification.”