The first American valentine cards were sold in Worcester, Massachusetts. They were designed and made by Mt. Holyoke College graduate Esther Howland, the daughter of a local stationer. Ms. Howland is known of the “mother of the American Valentine.”

…in 1849, the first American-made valentines were sold in Worcester. They were designed and made by Esther Howland, the daughter of a local stationer. After graduating from Mt. Holyoke College, she returned to Worcester and began making valentines modeled on a fancy one she had received from an English friend. Her brother took the samples on a sales trip and came home with an astonishing $5,000 worth of orders. Howland began by hiring her friends to assemble the valentines; within a few years, she built her business into a $100,000 a year enterprise, a notable success for any entrepreneur but a truly remarkable accomplishment for a nineteenth-century woman.
Read the rest of the story here: http://www.massmoments.org/moment.cfm?mid=52 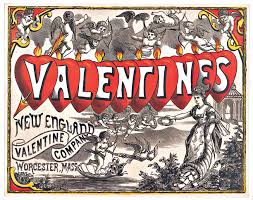