In the City of Lawrence, Dan Rivera – a current member of the Lawrence City Council – is challenging incumbent Willie Lantigua in his second run for Mayor. Controversies abound – with the Mayor himself in his actions, decisions, style and judgment, with his administrative hires some of whom have been investigated and indicted, and with the election commission itself charged to run Tuesday’s election in a fair manner according to the law. The State Elections Division sent observers to the preliminary in September and irregularities were noted. It’s a murky mess. 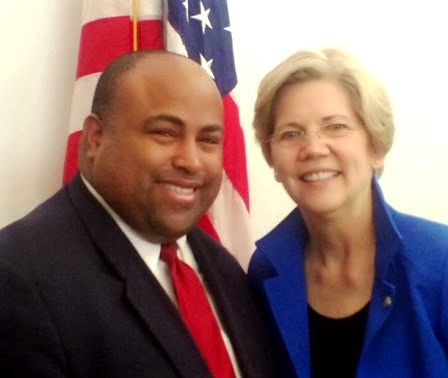 On the heels of a strong endorsement of Dan Rivera by Congresswoman Niki Tsongas, U.S. Senator Elizabeth Warren offered her own endorsement of Rivera:

“I am proud to call Dan Rivera my friend and support his effort to become the next Mayor of Lawrence,” Warren said in a prepared statement.

“Dan is a true public servant. From his service in our nation’s military, to his extensive work as the Vice President of the Lawrence City Council, Dan is a leader who can bring fresh ideas to overcome the challenges the city faces today. Lawrence is at a critical moment in its history.”

“I know Dan will work tirelessly to reestablish the financial well-being of the city, while making the right investments for the future. As a graduate of Lawrence Public Schools and the University of Massachusetts, he understands that investing in our future means investing in our schools and our youth. And I know he has the experience and personality to work with state and federal partners to improve the quality of life for every resident,” she said.

Read the full article in today’s Eagle Tribune and the full statement in breaking news in the Valley Patriot.

Note: I know Dan Rivera personally as do many in this area of the Merrimack Valley. An alum of UMass Amherst, a veteran and civic activist, Dan worked for MV Catholic Charities and for Marty Meehan in his congressional office. Dan would bring the knowledge, skill, experience, passion and integrity – so sorely needed – to the office of Mayor and to the people in the city of Lawrence.