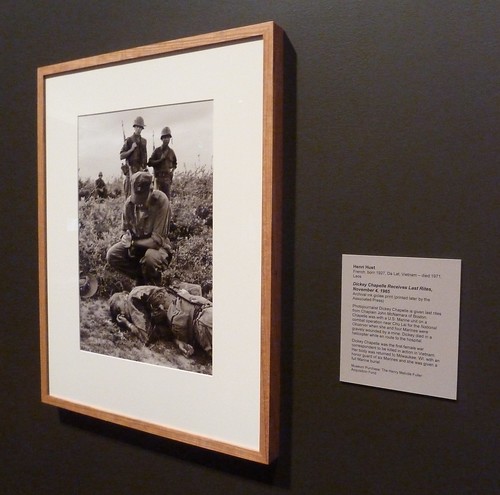 One of my hobbies in life is finding connections to Lowell wherever I can. I found one during today’s visit to the photographic exhibit “Visual Dispatches from the Vietnam War” at the Currier Museum of Art in Manchester. The above photo, one of only 35 in the exhibit, carries the following caption:

Chaplain John McNamara of Boston makes the sign of the cross as he administers the last rites to photographer Dickey Chapelle in South Vietnam Nov. 4, 1965. Chapelle was covering a U.S. Marine unit on a combat operation near Chu Lai for the National Observer when she was seriously wounded, along with four Marines, by an exploding mine. She died in a helicopter en route to a hospital. She became the first female war correspondent to be killed in Vietnam, as well as the first American female reporter to be killed in action. Her body was repatriated with an honor guard consisting of six Marines and she was given full Marine burial.

“Chaplain John McNamara” later in life was Bishop John McNamara, the regional bishop of the Merrimack Valley who lived right here in Lowell. Two years ago on the tenth anniversary of his death, Marie posted this memorial tribute to Bishop McNamara.